Question 4.
Give any two contribution of Physical Education for the development of a person and society.
Answer:

Question 5.
Which are the objectives which are attain in the field of sports. Name any two.
Answer:

Question 6.
Mention the quality which are introduced in sports and game.
Answer:
Quality of Leadership.

Question 2.
Define Physical Education according to D. Oberteuffer.
Answer:
D. Oberteuffer says: “Physical education is the sum of those experiences which come to the individual through movement.”

Question 7.
“Games make good leaders.” How?
Answer:
Games develop good leadership qualities in man. The field of Physical Education is quite vast. In games the students get opportunities to work as captain, secretary, referee or umpire. He behaves according to his aptitude in these situations. As a captain he directs his team mates and as an umpire and referee he gives in partial judgements. He organises his team very well as a secretary. All these things develop in him the qualities of a good leader.

Qualities of good character are a must for a leader:
He should have the qualities of discipline, punctuality, sympathy, love, equality in attitude towards others. One learns all these qualities by taking part in games.Games also make a person active and smart also.All these things indicate how games develop leadership qualities.

Question 8.
How can Leisure Time be usefully spent? Describe in brief.
Answer:
It has been rightly said, “An idle brain is devil’s workshop.” It is often observed that an idle man indulges in mischiefs. Sometimes an idle man starts indulging in such activities that cannot be accepted socially or ethically. It is due to the fact that the man has idle time but he does not know how to make use of it.

Question 1.
What is Physical Education? Mention its Aim.
Answer:
Physical Education:
Physical Education deals with the knowledge-pertaining to human body. It gives direction in the development and growth of the body, and its means are physical exercises. Many scholars have given definitions about this subject, some of which are given below:

1. D. Oberteuffer says:
“Physical education is the sum of those experiences which come to the individual through movement.”

2. According to R. Cassidy:
“Physical education is the sum of change in the individual caused by experiences which bring in motor activity.”

3. J.B. Nash thinks:
“Physical education is that phase of the whole field of education that deals with big muscle activities and their related responses.”

4. According to J.F. Williams:
“Physical education is the sum of men’s physical activities selected as to kind and conducted as to outcomes.”

5. In the words of Charles A. Bucher:
“Physical education is an integral part of total education process in a field of endeavour which has as its aim the development of physically, mentally, emotionally and socially fit citizens through the medium of physical activities, which have been selected with a view to realizing these outcomes.”

6. J.R. Sharman thinks:
“Physical education is that part of education which takes place through activities which involve that motor mechanism of the human body and which results in the individual’s formulating behaviour patterns.” According to the definition provided by Central Advisory Board of Physical Education and Recreation, “Physical Eudcation is education. It is education through physical activities for the development of the total personality of the child to its perfection in body, mind and spirit.”

7. In the words of A.R. Wayman:
“Physical Education is that part of Education which has to do with the development and training of the whole individual through physical activities.”
The following points emerge from the study of above-mentioned definitions:

Question 2.
Describe the main objectives of Physical Education.
Answer:
Difference in the terms ‘Aim’ and ‘Objectives’:
It is essential to differentiate ‘aim’ from ‘objectives’ before we understand them individually. Generally, aim and objective are treated as synonyms,, but in fact these two terms are not synonyms. There is a distinct line that divides the two, and brings out the difference in their meanings. “Aim” is the final goal whereas ‘objective’ is a definite and distinct stage. If our aim is the top-most floor, then the objective constitutes small stages in the way to this floor, and by crossing these stages we reach the destination.

So we can say that in climbing the staircase to our destination objective serves as stairs. When the aim of Physical Education is to produce superior citizens, its objective is to keep them physically healthy. Among its others objectives are to inculcate good habits in man and to endow him with traits of good character. In order to realize the aim of total development of a man’s personality, his physical, mental and moral development are the essential objectives.

1. Views of J.F. Williams:
“Physical Education should aim to provide the skilled leadership, adequate facilities and ample time. For affording full opportunity for individuals and groups to participate in situation that are physically wholesome, mentally stimulating and satisfying and socially sound.”

3. Views expressed in Conference of Principals of Physical Training Colleges. “Physical Education should aim to provide opportunities that will make the children and youth of India physically, mentally and constitutionally fit and develop in them the skills and attitudes conducive to long, happy and creative living in a changing society.”

2. J.B. Nash has given the following four objectives of Physics Education:

3. Another scholar named Buck Walter has divided the objectives. Physical Education into three main categories.
They are as follows:

In similar says, many other scholars have expressed their opinion about the objectives of Physical Education. Among these scholar the prominent are H. Clark, Hetherington, Wood, Cassidy etc.

Question 3.
What are the objectives of Physical Education the we acquire in game and sports.
Answer:
1. Physical Development Objectives:
Those objectives included in this category by which man develops physically b making his body strong, healthy and attractive. He does physical activities and takes active part in games in order to achieve these objectives.

2. Mental Development Objectives:
Those objectives fall under this category by which mental tension and stress are removed from the child’s mind. Children are trained to think properly. Moreover, they are given training in overcoming and solving various problems and obstacles that come in their way of achieving some aim.

3. Motor Development Objectives:
Those objectives are included in this category by which man becomes capable of doing physical activities easily and without exerting too much.

4. Social Development Objectives:
Those objectives are included in this category by which qualities like leadership, tolerance, co-operation, boldness, self-discipline and self-expression are developed in a person. Such qualities enable one to become an ideal citizen and useful member of society. 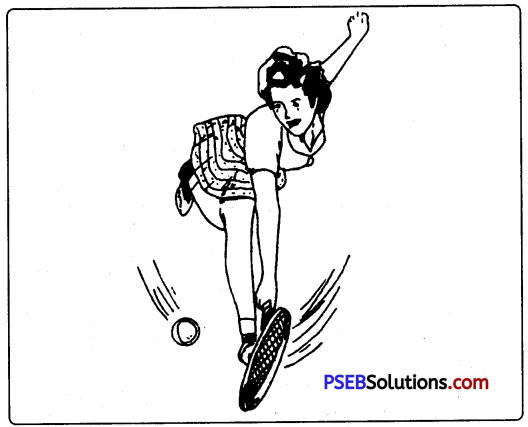 Character Formation or Moral Development:
Playground is a school for character formation-
In the playground the players abide by the rules of the game. They learn to lead a good life and become refined personalities. If the umpire gives a decision that is not liked by them even then they continue with the game and never indulge in bad behaviour. The qualities like discipline, abiding by the rules, love and co-operation are learnt in the playground. It results in character formation and moral development.

5. Neuro-muscular Co-ordination:
It is essential to conduct our daily activities in an organised manner so that neuro-muscular co-ordination develops. Physical education helps in it.

6. Prevention from Diseases:
An important aim of physical education is to protect students from diseases. Many of the diseases result from ignorance. The students are educated about the causes of many diseases. This can protect them from many diseases. To conclude we can say that Physical Education is very useful for the all round development, citizenship, human values and national integration.

1. Tolerance:
We learn the lesson of tolerance in the hockey playground. All the players want their team to win. But sometimes, in spite of their best efforts, the opposite team wins the match. In such kind of a situation, the members of the defeated team do not lose heart. They remain in high spirits. They treat victory and defeat in the same way. They gain practical training of tolerance.

2. Discipline:
Students learn to live in discipline. They come to know that discipline is the key to success. They remain in discipline. They abide by the commands of the captain and happy accept the decisions of the referee. Even at the face of imminent depat. They do not indulge in indiscipline.

3. Character Development:
Participation in the game of hockey inculcates a sense of discipline, co-operation and tolerance in the students. It helps in the development of their character. They sacrifice their personal interests for the common cause.

5. Creation of Good Citizens:
The qualities of discipline, duty, tolerance etc. develop in the students in the hockey playground. These qualities help them in becoming good citizens.

6. Co-operation:
The player in the game of hockey co-operates with his fellow players. He does not force his own views on others-rather politely puts his Views to develop consensus. It develops a sense of co-operation.

7. National Spirit:
Hockey playground is the place where the players take part in the game irrespective of his caste, religion or creed. No player is turned out of the playground on the basis of his religion. It helps develop national spirit.

10. Spirit of Sacrifice:
The spirit of sacrifice is very essential in the game of hockey. When we play for our school, college, state or country we give the credit of victory to these institutions. Games always demand sacrifice. Duke of Wellington- after defeating Napolean in the battle of Waterloo, said, “The Battle of Waterloo was won at the playing-fields of Eton and Harrow.” It proves that games help in producing good leaders.