I. Answer the following questions in 1-15 words :

Question 1.
Write the definition of mineral resources.
Answer:
Minerals are natural substances that are made up of one or more elements. These are found in the interior of the earth. These have a definite chemical composition. These are identified by their physical and chemical qualities.

Question 2.
Where do iron-ore is found in India?
Answer:

Question 3.
What are the uses of copper?
Answer:
Copper is used for making utensils, coins, electrical wires and electronics. Their sheets are also made.

Question 8.
What are multipurpose projects?
Answer:
The dams built mainly for power generation are called multi- purpose projects as these provide many benefits at the same time.

Question 1.
Which are the countries from where iron ore is mainly found? Write down the different types of iron ore :
Answer:
Countries: Russia and its neighbouring countries, Australia, Brazil, U.S.A. produce large quantities of iron ore. India produces 5% iron ore in the world.

Question 2.
Write down a note on the importance of Bauxite.
Answer:
Aluminium is extracted from Bauxite. It makes up about 8 per cent of the earth’s crust. It is light, strong and a very good conductor of electricity. It is largely used in various industries like transportation (aircraft, ship building, automobiles), chemical industries, electrical goods, machines, etc. It is used in making utensils, coins, furniture, sheets, packing material, photo-frames, pipes, etc. It is the basis of our telecommunication systems as it is used in radios, telegraphs, televisions and electrical wires. Due to its wide uses, it has been described as the ‘champion of metals’ or ‘the metal of the twentieth century’.

Question 3.
What is the importance of natural gas in our life and name the major areas in our country where it is found?
Answer:
Natural gas is produced in areas producing petroleum. When an oil well is dug, Natural gas is found in upper layers.

Use: It is used in homes for cooking, in vehicles and in industry.

Production: All the petroleum-producing countries produce Natural gas. The U.S.A. is the leading producer in the world. Russia, Middle East, Canada, Uzbekistan are other producers. Natural gas is produced in some parts of India. These include the Krishna-Godavari basin, Bay of Bengal-Orissa region and Barmer region of Rajasthan. Gulf of Cambay and Kutch region in Gujarat is a potential area. About 75% of the production of India comes from Bombay High.

Question 4.
Name the important factors which are favourable for the generation of Hydroelectricity?
Answer:
The development of water power (Hydro-electric power) depends upon the following factors:

Question 1.
What are energy resources? What is their contribution towards the development of the country? Write in detail about any two energy resources.
Answer:
Coal: Coal is the prime source of energy. It is often called the ‘Mother of Industries’. It has been the basis of industrial revolution. Coal is used as a raw material in iron and steel, chemical industries. India ranks seventh in the world as regards coal reserves. The total proven coal reserves are nearly 214,000 million tonnes. These reserves will not last long. The major states known for coal reserves are Jharkhand, Bihar, Orissa, West Bengal, Chhattisgarh, M.P., Andhra Pradesh and Maharashtra. Coal production is 330 million tonnes (4% of world).

(a) Gondwana coalfields: These belong to the period of Gondwana age. Nearly 3/ 4th of coal deposits are found in Damodar valley (Damuda series). Godavari, Mahanadi, Son and Wardha valley have also coal deposits. 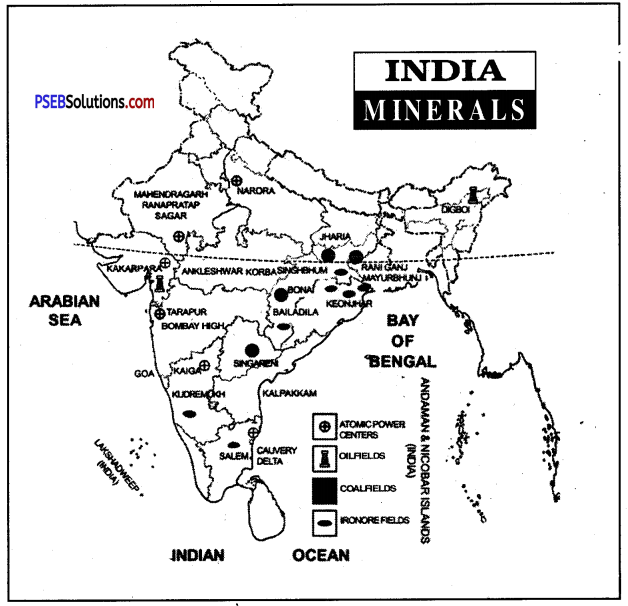 The first oilfield in India was discovered in 1867 at Makum in Assam. At present the production is as below (334 lakh tonnes) : The production of oil in India is increasing everywhere under the organization of Oil and Natural Gas Commission. 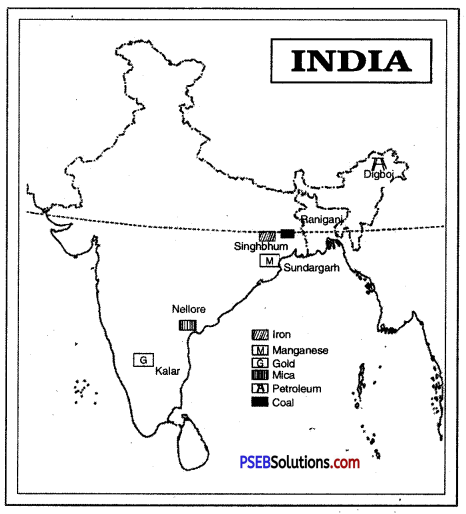 Question 6.
What is the name of mining shown in the picture?

Question 7.
Which source of energy is the activity in the picture associated with?
Or
Seeing the picture tell the source to which it belongs.

Fill in the Blanks :

Question 1.
Into how many categories can minerals be classified? Give two examples of each.
Answer:
Minerals are grouped into three categories :

What are the uses of Manganese?
Answer:

Question 4.
Where does India rank in the production of manganese in the world? Where is it found in India?
Answer:
India ranks second in world production of Manganese. In India the main producing areas are Karnataka, Orissa, Madhya Pradesh, Maharashtra, West Bengal and Goa.

Question 5.
What is Bronze? What is its use?
Answer:
It is a hard and strong product. Tin and copper are mixed to make it. It is used in making tools and weapons.

Question 6.
Where is copper found in the world ? Name the copper producing areas in India.
Answer:
USA, Russia, Chile, Zambia, Canada and Zaire are the main producers of copper. In India copper is found in Singhbhum (Jharkhand), Balaghat (Madhya Pradesh) and Jhunjhunu, Alwar (Rajasthan).

Question 7.
Which two states of India are large producer of Bauxite? Name two copper producing areas of these states.
Answer:
Jharkhand and Rajasthan are Bauxite producing states of India. Copper is mined at Singhbhum and Khetri.

Question 8.
What are the uses of Gold?
Answer:
Gold is a valuable metal :

Question 9.
What are the uses of copper?
Answer:
Copper is a soft and brown-coloured metal. It has been used by man for a very long time. It is mixed up with tin to be known as Bronze. It is used in the production of utensils, coins, electric wires.

Question 11.
Why is petroleum called Rock oil?
Answer:
Petroleum or ‘mineral oil is called rock oil because it is formed in sedimentary rocks. It is called crude oil.

Question 16.
Petroleum is referred to as “black gold”. Why?
Answer:
Nowadays petroleum is a major source of energy in the world. Many byproducts such as kerosene, fuel, lubricating oils etc. are obtained from it. Petrochemical products have become very useful. Petroleum is used in agro-industry, paints, perfumes, transport, etc. So it is rightly called the “black gold”.

Question 17.
Distinguish between conventional and non-conventional sources of energy.
Answer:

Question 21.
‘Human civilisations are associated with discovery of minerals.’ Give example.
Answer:
Mining is an age-old activity. The use of minerals is marked with different stages of human civilisation. During 5000 B.C., copper age existed. During 3000 B.C., Bronze age and during 1400 B.C., iron age were developed.

Question 23.
Many African countries have large potential of water resources but they have not used it to generate hydro-electricity.
Answer:
Large amount of capital is required for making dams on rivers, fixing machines and turbines and buying of transmission lines. So in spite of the water resources they are not used to generate hydro-electricity.

Question 25.
‘Mineral conservation can delay a crisis.’ Explain.
Answer:
Due to growing population, the use of minerals is increasing at an alarming rate. Minerals will not last long. We need to find substitutes, reduce consumption, recycle mineral resources. It can delay a mineral crisis.

Question 27.
List three basic ways through which energy is-obtained.
Answer:
Energy is the capacity to do work. It can be obtained by :

Question 29.
Describe the formation of coal.
Answer:
Coal is a black or brown rock consisting mainly of carbon. Coal is formed by the decomposition of vegetation of last ages. Most of coal deposits were formed in carboniferous age about 300 million years ago.

Question 33.
Give an account of nuclear power.
Answer:
Nuclear power:

Question 35.
Rajan lives in West Bengal. Which cereal crop should he sow in his field to maximise his profit?
Answer:
Rice.

It is due to two factors :

All these sources are renewable or inexhaustible.
1. Wind energy: It can be used for generating electricity. It is estimated that wind alone can provide 2000 MW of electricity. The states of Gujarat, Tamil Nadu, Maharashtra and Orissa are better placed in regard to this energy. Areas with constant and high speed winds are suitable for the purpose.

2. Tidal energy: The Gulfs of Kutch and Cambay are ideally suited to develop electricity from the energy produced by high tides entering to narrow creeks.

3. Geo-thermal energy: India is not rich in this source. However, efforts are on to utilize natural energy of the hot springs at Manikaran in Himachal Pradesh.

4. Energy from urban waste: A pilot for demonstration purposes had already been set up in Delhi to treat solid municipal waste for conversion into energy. It produces nearly 4 MW energy every year. Sewage in cities is used for generating gas and electricity.

Question 5.
Environmental aspects must be carefully looked into before building huge dams.
Answer:

Question 2.
Processing of digging out of minerals is known as __________
Answer:
quarrying

Question 1.
What is Hydel power? How is it generated? Describe its production in India and world.
Answer:
Hydel power is generated through falling water. Dams are built on rivers, the water is dropped from a height to rotate turbines. Due to friction, turbines generate electricity.

Hydel power in India. India produces sufficient Hydel power. But India’s share is only 1% in world production. Rivers and canals are the main sources.

Ganga, Brahmaputra and tributaries are snow fed and perennial rivers. So these have large capacity to generate water power with 18% of total potential of India. But peninsular rivers are seasonal and depend upon rainfall. So their capacity is low.

Question 2.
Describe the economic importance of minerals. Explain the main types of minerals.
Answer:
Minerals. Mineral resources are of great use to man. Minerals have been called ‘The Gifts of Nature’. Mineral resources have been used since pre-historic times. Human civilisation has seen many ages like the stone age, copper age and iron age. Modern industrial and economic development depends upon the production and utilization of minerals.

Types of Minerals: There are 70 to 80 minerals found on the surface of the earth. These can be divided into three types :

Question 3.
Describe the production of Petroleum in India.
Answer:
Production. In about 10 lakh sq. km. oil-bearing rocks are found in India. The oil reserves in India are estimated to be 50 crore metric tons.
The first oilfield in India was discovered in 1867 at Makum in Assam. At present the production is as under: