Diffused reflection is not failure of laws of reflection. It is only due to irregularities on the reflecting surface.

Question 5.
Describe an activity to show that the incident ray, the reflected ray, normal, the point of incidence lie in the same plane.
Experiment.
Take a white sheet, spread it on a table. Draw a line MM on it. Place a plane mirror vertically on this line. Now throw light on a comb in this ways that a parallel light rays fall on the mirror. Adjust it in such a way that a beautiful pattern of incident and reflected rays is formed. Now mark points A, B, C on incident ray and points D, E, F on its corresponding reflected ray. Switch off the torch and remove the mirror. Join the points and extend line to mirror. ABC will meet MM at O and DEF will all also be meeting at O. OA is incident ray and OF is reflected ray. Draw ON ⊥ MM . 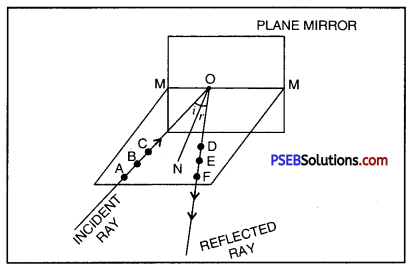 Measure the angle of incidence ∠AON and the angle of reflection ∠FON which would found to be equal. Incident ray, reflected ray and normal, all lie in one plane of paper.

Choose the correct option in the Questions 7-8.

Question 7.
Angle of incidence is equal to angle of reflection
(a) Always
(b) Sometimes
(c) Under special conditions
(d) Never.
Answer:
(a) Always.

Question 9.
Describe the construction of a Kaleiodeoscope.
Answer:

Construction of a Kaleiodeoscope. It is a toy to form many images by multiple reflections. A Kaleiodeoscope is made up of three strips of plane mirrors inclined at angles of 60° enclosed in a tube. One end of tube has a ground glass plate with a clear glass plate on its inner side. A metallic ring separates the two plates and the space is filled with coloured pieces of glass or broken bangles. A cardboard with a hole in the centre is fixed on the other end of the tube.

Question 11.
Gurmit wanted to perform activity 16.8 using a laser torch. Her teacher advised her not do so. Can you explain the basis of the teacher’s advice ?
Answer:
Laser torch has very sharp beams of light which can destroy the pupil or retina of the eye.

Question 12.
Explain how can you take care of your eyes.
Answer:
Care of eyes.
Eyes are the most precious gifts of nature. So we should take full care of our eyes by taking atleast following precautions.

Question 13.
What is the angle of incidence of a ray if the reflected ray is at an angle of 90° to the incident ray ?
Solution: 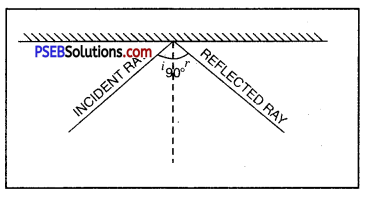 Question 14.
How many images of a candle will be formed if it placed between two parallel mirrors separated by 40 cm ?
Answer: 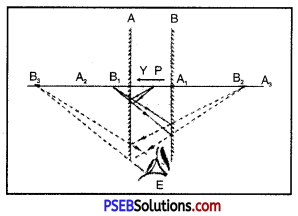 When mirrors are separated by 40 cm and are parallel to each other so that the angle between the mirrors is 0° which is not sulj-multiple of 360°. Then theoretically, the number of images formed would be infinite, but as a considerable amount of light is lost due to reflections so only a limited number of images are seen which is shown in figure.

Question 15.
Two mirrors meet at right angles. A ray of light is incident on one at an angle of 30° as shown is figure. Draw the reflected ray from the second mirror.

Question 16.
Bhoojo stands at A just on the side of a plane mirror as shown in figure. Can he see himself in the mirror ? Also can he see image of objects situated at P, Q and R ?

Solution:
Bhoojo cannot see his image in the mirror as he is standing outside the edge of mirror. He can see the images of P and Q easily but not the image of R.

Question 17.
(a) Find out the position of image of an object situated at A in plane mirror.
(b) Can Paheli at B see this image ?
(c) Can Bhoojo at C see this image ?
(d) When Paheli moves from B to C where does the image of A move ? 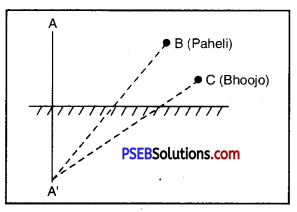 (a) The image of A in the mirror will be as far behind as the object in front of the mirror.
(b) Yes, Paheli can see the image.
(c) Yes, Bhoojo can see this image.
(d) When Paheli moved from B to C, the image of A will not move forward.

Question 1.
The plane and polished surface that returns light falling on it in the same direction or any other direction is called:
(a) Lens
(b) Prisom
(c) Mirror
(d) Kaleidoscope.
Answer:
(c) Mirror.

Question 4.
When you see in dim light the size of your pupil becomes:
(a) Small
(b) Large
(c) Neither small nor large
(b) Very small.
Answer:
(b) Large.

Question 5.
The Phenomena of splitting of light into its constituent colours is called:
(a) Reflection
(b) Refraction
(c) Dispersion
(b) Combination.
Answer:
(c) Dispersion.

Question 2.
It is what that helps us to see objects ?
Answer:
Light.

Question 4.
Is moon a luminous or a non-luminous body ?
Answer:
Non-luminous.

Question 5.
Where is a reflection seen ?
Answer:
In mirror.

Question 6.
Which surface can act as a mirror ?
Answer:
Any polished and smooth surface.

Question 8.
What is the angle of reflection, when a ray of light is incident normally on a plane mirror ?
Answer:
Zero.

Question 11.
Give one example of dispersion of light in nature.
Answer:
A rainbow.

Question 13.
What is the function of sclerotic in human eye ?
Answer:
Sclerotic provides a solid shape to the eye and protects it from external injuries.

Question 16.
What are cones ?
Answer:
Cones on retina are sensitive to different colours. If cones are absent or insufficient, the person is colour blind.

Question 17.
What is basic cause of colour blindness ?
Answer:
It is due to absence or insufficient number of cones on the retina. Seeing sun or towards it during solar eclipse may cause colour blindness.

Question 18.
Why cats and bats are able to see at night ?
Answer:
They have very large number of rods on retina. Hence, they are able to see even a small quantity of light.

Question 19.
At what rate the images pass one after the other on a cinema screen ?
Answer:
25 or more per second.

Question 20.
What type of photosensitive cells are present on the retina of the eye ?
Answer:
Cones and rods.

Question 21.
Name one device that can be used by short statured person to see over the head of a crowd.
Answer:
Periscope.

Question 22.
Find out the letters of English alphabet or any another language known to you in which the image formed in a plane mirror appears exactly like the letter itself.
Answer:

Question 1.
What are luminous and non-luminous bodies ? Give examples.
Answer:
Luminous Bodies.
Those objects which emit their own light, are called luminous bodies e.g. sun, stars, burning fire, radium etc.

Non-luminous Bodies.
Those objects which do not emit light of their own but shine due to other luminous bodies, are called Non-Luminous bodies. They are visible only, when light falls on them.
e.g. Moon, earth and other planets, things in a room.

Question 2.
How do we see objects ?
Answer:
When light from a light source falls on any object, it is scattered by it. The scattered light enters our eyes to form the image of the object and the object is, thus, seen.

Question 3.
Give the conditions necessary for seeing an object.
Answer:
Conditions for Seeing Objects. To see an object, the following three conditions are required to be satisfied:

Regular Reflection.
It takes place when a beam of light falls on a smooth and polished surface, e.g., a mirror. The reflected rays from an even surface form a clear image.

Question 13.
What is myopia ?
Answer:
Myopia.
The focal length of the eyes of some people is very small. Therefore, the image of distant object is not formed on their retina but it is formed at a point in front of the retina. In other words, they cannot see distant objects. This defect of vision is called Myopia or short sightedness.

Question 14.
What is hypermetropia ?
Answer:
Hypermetropia.
When people grow old, the muscles of the eyes lose their strength to control the curvature of the lens. As a result, the image of nearby objects is not formed at the retina, but it is formed behind the retina. So these people cannot see nearby objects clearly. This defect of vision is called Hypermetropia or Farsightedness.

Question 16.
The following picture shows the reflection of light: 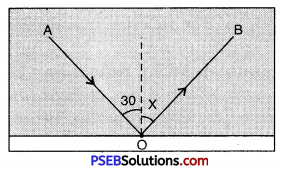