Marking:
The playfield should be marked with distinctive lines. These lines should not exceed five inches in width. Long lines are called touch lines and the short lines the goal lines. At each comer of the playfield a flag post is placed. Such a post should not be less than one yard outside the touch line. A circle shall be drawn in the centre of the field of play with a radius of ten yards.

Goal Area:
At each end of the playfield two lines shall be drawn which shall be at right angles to the goal lines. Each line shall extend upto 10 yards in the field, and shall be joined by a line drawn parallel to the goal line. The space encircled by these lines and the goal lines is called the goal area.

Goal Post:
Two posts shall be placed in the centre of goal lines at a distance of 8 yards or 24 feet. Their ends are joined by a crossbar. These are 8 high from the ground. The width and the thickness of goal posts and cross bars should not exceed 5″. Ball:
The shape of football is spherical. Its upper part is made of leather or of some other approved material. Its circumference is not less than 68.5 cms and not more than 71 cms. Its weight shall be from 14 to 16 ounces. The ball cannot be changed during the play without the permission of the referee.

Question 2.
How many players take part in the game of Foot Ball? Describe the duration of the game, dress, numbers of officials, and goal?
Answer:
Number of players:
A football match is played between two teams. Each team consists of 11 players and 5 extra players. In a match no team is allowed to substitute more than two players. The substituted player is not allowed to take part in the match again.

Dress:
The player can normally wear a shirt or jersey, underpants (knickers), socks and shoes. The colour of the goalkeeper’s shirt or jersey shall be different from that of other players. The shoes are to be worn compulsorily.

Officials:
Among the officials are a referee and two line men. The referee makes the players obey the rules of the game and decides any matter of big dispute. His decision, about what happened in the game and what was the result, is final.

Duration of the Game:
The game is played in two equal durations of 45 minutfes each. An interval of 5 minutes follows the first duration, and of 10 minutes with the consent of the two teams. The start of play. In the beginning of the play the choice of the first kick and the side is made by a toss. The toss winning team is free to choose either side and to kick first.

Score or Goal:
When a ball, according to rules, crosses completely the goal line under the cross bar between the goal posts, a goal is allowed. The team scoring more goals shall be declared the winner. In case, no goal is scored or an equal number of goals are scored, the game shall be termed a draw. But if the tournament is taking place as per league rules, then in case of a draw both the teams shall be awarded 1 point each.

If the football match ends in draw, the extra time for play will be given of which duration of play will be 15-15 minute each whenever during the period of a goal is scored by a team the match ends there and then. In case there is no result during the play, then 5-5 penalty strokes are made by each team till the winner is decided.

The Ball In and Out of play

The ball is out of play as a result of the following reasons:

The ball in the play

The ball remains in the play from the beginning to the end, but when it was in these situations:

Formation of Players:
The formation of players in football matches varies. Normally, it is 1-2-3-5. But in the European countries it is as follows:

The players continue to change the formation during the play according to the need.

Question 3.
What do you understand by off side, Free kick, Throw in, Penalty kick, Corner kick, Goal kick?
Answer:
(1) Off-side:
A player is off-side when he is in the half of his opponents or their goal line, and when there are no two opponents behind him. Even in such cases he is not off side if he is in the following situations:

The thrower at the time of delivering the ball must face the field. Either of his foot should be on or outside the touch line. The thrower will make use of both of his hands, and throw the ball from behind and over his head. He cannot play the ball until it has been touched or played by any other player.

(4) Penalty Kick:
This kick is taken from the penalty mark. When it is being taken, only the player taking the kick and the opposing goalkeeper remain in the field of play. This mark will be at least 10 yards away. In order to complete the penalty kick the half time or the full time may be extended.

(5) Corner kick:
When the ball passes over the goal line and it has last been played by one of the players of the defending team, a member of the offending team is asked to take comer kick. The player of the opposing team takes the comer kick in a quarter area of the nearest flag post. Until the comer kick is taken, the players of the opposing team shall remain away at a distance of 10 yards. The kicker cannot touch the ball until it has been touched or played by another player.

Fouls and Offences in the Game of Football

(a) If a player intentionally commits the following offences or infringement of rules, the opposing team shall be awarded an indirect free kick from the place of infringement:

If a player of the defending team commits any of these offences in the penalty area, the attacking team is given penalty kick.

(b) If a player, commits the following offences, the opposing team shall be awarded an indirect free kick from the place of infringement:

5. (a) When as a goalkeeper, he takes more than four steps without throwing the ball on the ground. (b) When as a goalkeeper he indulges in such tactics as hold up a game and waste the time, and tries to give undue advantage to his team.

(c) A player shall be warned that the opposing team shall be awarded an indirect free kick if:

Kicking:
Kicking is a way of moving the ball towards the required direction with the help of feet, with the required speed keeping in view that the ball reaches its destination. In the art of kicking, accuracy, speed, direction and distance are maintained not by left or right foot but by both feet.

The most important point in the training of the players is about the need of playing the game with both feet. It is easy to teach the young new players how to play with both feet. Without it, it is difficult for a player to reach any level of success in the game.

When the ball is kicked within a short distance these two variations are put into use. The ball moves slowly but a great improvement is brought about, as result of which this method is often put into use at the time of aiming towards the goals. Half Kick:
When the ball comes bouncing to the player or is in the air, there is then a sort of instability not only about its direction of bouncing because of the level of football ground but also about its height and speed. The most effective way of making it clear is the right time, co-ordination of the movements of kicking feet and the raising of the ball upto a proper height.

Over head kick:
This kick is taken with a three-fold purpose

To Make Pass:
The action of making ‘passes’ in football is the basis of team work. The pass increases the co-ordination among the team and adds to the growth of team work. Connected with the condition of the play a ‘pass’ is an evidence of the team play and hence is a basic element for which special time and attention should be given during the training and practice of the team. To achieve perfection at goals a team pass is a right type of kick by an individual player.

It is said that a successful pass is better than kicks. To give pass is an important part of inter-relatedness. It is to harmonize the complex structure of mutual movement between players with individual intelligence at the time of attack and defence during the play. In giving pass, one who makes ‘pass’ the ball and the one who receives the ‘pass’ are involved.

Making passes are normally categorised into long and short passes:

(a) Long passes:
These passes are made use of when there is rapid movement in the game. In such situations long passes prove to be very useful. In such passes, the ball can be moved both sideways and backward. In all long passes, the upper part of the foot or kick is used. The long passes strengthen the defence and facilitate short passes.

(b) Short passes:
Short passes are used for a distance of 15 yards or so, and they are more quick and accurate than long passes.

Low-pass:
It is shorter than push-pass. In it, the ball is raised high and bounced. It is used to cross the ball over the head of the opponent when he is quite near or is trying to take the throw-ball.

In contrast to the other two passes, the flick pass is used to flick or push the ball, having turned the feet inward. This type of pass is used to give pass towards the back while keeping the ball in possession and dribbling it.

Trapping:
Trapping is the basis of controlling the ball. The trapping of the ball means preventing the ball from going away from the player. It is not merely an activity of stopping the ball or making it stationary but also an essential technique used to take the ball in firm hold. Stopping the ball is first step of ball control, and the second part which the player brings into practice for his own benefit is also essential.

Note:
The training of traps should be given for
(a) dribbling ball and
(b) bouncing ball. Trap with the Under-foot:
Such a type of trapping is good if you have no hurry and enough freedom, and nobody is beside you.

Trap with Inner Parts of Feet

It is most effective and commonly used trap. Not only does this trap enable a player to trap the ball but also helps him in moving towards any direction. This trap is particularly good for the ball coming from a side or a comer. If the ball comes straight, the body is moved in the direction in which the ball is to go. 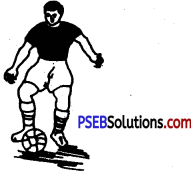 Trap with the Outer Part of Foot

It is like the earlier one but it is difficult for in it one has to keep the balance as the weight of the player’s body turns outside and off the centre.

When the ball is above the waist and cannot be effectively trapped with feet, it is taken on the abdomen or chest or as it bounces from the ground.

It is meant for those experienced players who are well-versed in the foundation of ‘heading’. 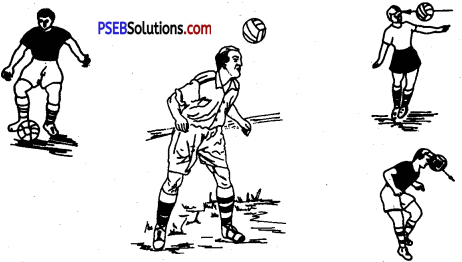 Important Information About the Football Game