Question 1.
Fill in the blanks:
(а) Micro-organisms can be seen with the help of a ……………. .
Answer:
microscope

Question 3.
Match the organisms in Column ‘A’ with their action in Column ‘B’

Question 6.
Name the micro-organisms which can fix atmospheric nitrogen in the soil.
Answer:

Beneficial aspects of Algae:
They help in the production of organic matter through photosynthesis which provides food to aquatic animals.

Question 8.
Write a short paragraph on the harms caused by microorganisms.
Answer:
Harmful effects of Microorganisms:
1. These microorganisms cause a large variety of diseases in plants, animals and human beings.
2. They spoil food items as well as other articles like clothes, leather etc.
3. Micro-organisms spoil food by: 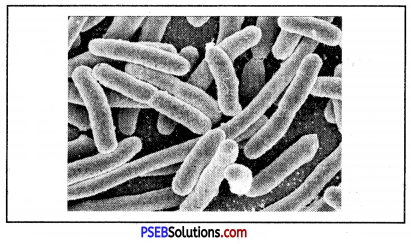 Question 2.
Is of which micro-organism is shown in the diagram ? Question 3.
The slide which is being shown below with the help of microscope is of which micro-organism ? 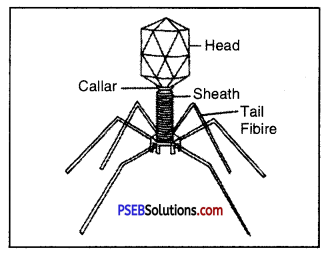 Question 5.
Today the teacher in the class showed a slide to his students with the help of microscope. To which micro-organism does this slide belong ? 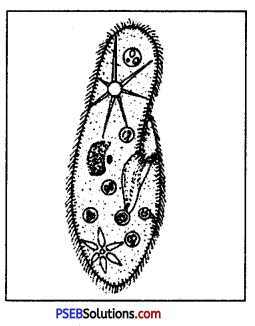 Question 9.
The most common carrier of communicable diseases is:
(a) Ant
(6) Housefly
(c) Dragonfly
(d) Spider.
Answer:
(b) Housefly

Question 12.
Which instrument is used to see micro-organisms ?
(a) Magnifying glass
(b) Microscope
(c) Telescope
(d) All the above.
Answer:
(b) Microscope.

Question 13.
Which of the following micro-organisms is responsible for causing cholera ?.
(a) Virus
(b) Protozoa
(c) Bacteria
(d) None of these.
Answer:
(c) Bacteria.

Question 1.
Fill in the blanks:

4. The poisonous substances produced by some pathogenic bacteria are known as ……………… .
Answer:
toxins

7. The product of algae used for raising bacterial culture is called ……………….. .
Answer:
agar

10. Microorganisms which form the borderline between the living and nonliving world are called …………..
Answer:
viruses

Question 2.
Define microscope.
Answer:
Microscope. It is an optical instrument which enables us to see the very tiny organisms called microorganisms.

Question 5.
What are micro-organisms ?
Answer:
Micro-organisms. These are small organisms which are too small to be seen with naked eyes.

Question 8.
Which is the smallest bacteria ?
Answer:
The smallest is rod-shaped bacteria measuring 0.15 mm.

Question 12.
How much nitrogen is fixed by blue-green algae in a paddy field in a year ?
Answer:
About 625 kg of nitrogen in one square km area.

Question 13.
Which micro-organism is used in the preparation of bread and alcohol ?
Answer:
Yeast.

Question 15.
What are the two major groups of fungi ?
Answer:
Yeast and moulds.

Question 16.
Under which group of micro-organisms Amoeba fall ?
Answer:
Protozoa.

Question 21.
Name a micro-organism which can live independently.
Answer:
Amoeba.

Question 24.
Which micro-organisms are used to prepare antiboitics ?
Answer:
Bacteria and Fungi.

Question 3.
What are the two groups of organisms of fungi ?
Answer:
Fungi consists of two main groups:
Yeasts and Moulds.

Question 4.
How do microbes survive adverse conditions ?
Answer:
Micro-organisms are very hardy. They can survive under extreme conditions of temperature and dryness by forming a hard outer coating called a cyst. Within this protective shell, they remain inactive as such, until more favourable conditions return. They, then emerge from their shell, multiply and go through their life cycles.

Question 5.
In what ways, are viruses different from other microbes ? Name two plant viruses and two animal viruses.
Answer:
Viruses are different from other microbes due to the following facts:
1. They are the smallest microbes.
2. They cannot be totally called living beings because they do not grow on their own.
3. They are mostly harmful and cause a number of diseases.

Question 6.
Why are viruses placed on the border line between living and nonliving things ?
Answer:
Viruses resemble living objects due to following reasons:

Viruses resemble non-living things due to the following reasons:

Question 7.
Differentiate between yeasts and moulds.
Answer:
Differences between Yeasts and Moulds

Question 9.
What are Bacteriophages ?
Answer:
Bacteriophage. Viruses are heterotrophic. Virus which depend on bacteria are called bacterial viruses or bacteriophages.
It is shaped like a rod. They destroy bacteria which are responsible for spoilage of organic matter.

Question 11.
How is bread formed ?
Answer:
When yeast together with some sugar and warm water is mixed with flour (atta or maida), the dough begins to rise. The presence of sugar and the warmth stimulates rapid growth of the yeast cells. During their reproduction, yeast cells produce carbon dioxide. Bubbles of CO2 fill the dough and make it rise. When baked into a loaf, the bread becomes light and spongy.

Question 13.
Suggest some methods to prevent the growth of moulds.
Answer:

Question 15.
What are the major differences between algae and fungi ?
Answer:

Question 16.
What are vaccines ?
Answer:
Vaccines.
A vaccine consists of antigens of mild strains of pathogens of a specific disease. When injected into the blood stream, it stimulates while blood cells to produce antibodies.

Question 19.
What is food poisoning ?
Answer:
Food Poisoning. Sometimes the microorganisms grow on our food items and spoil it. When we eat this food, it causes food poisoning. It causes serious illness and even death.

Question 20.
Explain the following terms in brief:
(a) Immunity
(b) Antibodies
(c) Vaccination.
Answer:
(a) Immunity.
Immunity is the ability of a person (or organism) to resist the development of a disease even when infective dose of the pathogen has been introduced. The science of development of resistance or defence to the causative agents of the diseases is termed as immunology. Foundations of immunology were laid by Edward Jenner (1796) who successfully developed first vaccine against small pox.

(b) Antibodies.
It is a substance occurring naturally in the blood or produced in response to the presence of antigen which is able to overcome the toxic effect of an antigen.

(c) Vaccination.
It is a process of injecting a substance (Vaccine) into a healthy person in order to develop immunity against a specific disease.

Question 22.
What is vaccine ? Describe the importance of vaccination.
Answer:
Vaccine. A vaccine consists of a small amount of dead or weakened germs of a particular disease that are injected into the body. Injecting or swallowing a vaccine is called the vaccination when the vaccine is injected into our body. Our body produces antibodies that fight with those dead or weakened germs. These antibodies stay in our body to prevent the future attack of such kind of microbes. Thus, our body develops immunity against the particular disease for which vaccination is provided. A typical cyanobacterial cell consists of a four layered cell-wall followed by plasma membrane. The cytoplasm contains gas vacuoles, ribosomes photosynthetic pigments such as chlorophyll a, carotenoids and circular double stranded naked DNA. The reserve food is in the form of cyanophycean starch, liquid globules and cyanophycean protein granules.

Question 24.
What are diatoms ? Sketch a few examples of diatoms.
Answer:
Diatoms.
They are microscopic unicellular algae found in fresh water springs, estuaries and marine water of ocean. They occur mostly as individual cells and some form colonies. Diatoms deposit silicon dioxide in their cell wall. They reproduce asexually as well sexually.
Examples of Diatoms 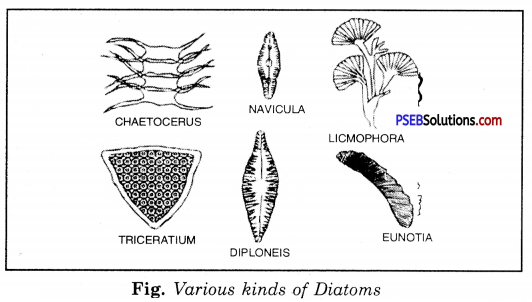 Question 25.
Ajit kneaded 1/2 kg maida along with lukewarm water. He also added some sugar and yeast in it. What will be the effect on kneaded flour after 2 hours ? Give reason for your answer. 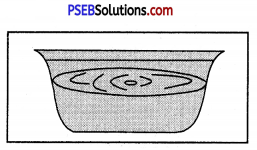 Answer:
The dough begins to rise. The presence of sugar and yeast stimulates rapid growh of the yeast cells. During their reproduction, yeast cells produce carbon dioxide. Bubbles of CO2 fill the dough and make it rise. Question 2.
Give in a tabulated form some of the common diseases affecting man and their mode of transmission and methods of prevention.
Answer:
Some Common Human Diseases Caused by Micro-organisms:

1. Dehydration and Sun Drying.
The process of removal of water from fruits, vegetables is called dehydration. It reduces the moisture content of food materials and, therefore, prevents the food from spoilage. Drying in the sun is one of the oldest method of food preservation.

2. Preservation by Salt and Sugar.
Common salt and sugar are good preservatives. These stop the bacterial growth in the food material. Pickles, jam, jelly, ketch up, squash, etc. are preserved by adding salt and sugar.

3. Deep Freezing. It is direct method for the prevention of bacterial growth. In this method, the food materials are cooled below 0 C. Fruits vegetables, meat, fish etc. can be easily preserved by this method.

4. Chemical Preservation. Certain chemicals can be used to preserve food. The substances which are added to the food materials to prevent their spoilage are called food preservatives. Benzoic acid, Potassium meta bisulphite, etc. can be used. Irradiation, canning and bottling are also used for preservation of food.