Question 1.
Name the essential components of a communication system.
Answer:
Transmitter, medium or channel, and receiver.

Question 3.
What is the function of a repeater in a communication system?
Answer:
Repeater pick up the signals from the transmitter, amplifies it and transmits it to the receiver. Thus, repeater comprises up of receiver, transmitted and amplifier. Its function is to extend the range of communication.

Question 4.
Define bandwidth and describe briefly its importance in communicating signals.
Answer:
It is defied as the frequency range over which given equipment operates.
Importance: To design the equipment used in communication system for distinguishing different message signals.

Question 6.
How are microwaves produced?
Answer:
A type of electromagnetic wave is microwave whose wavelength ranging from as long as metre to as short as millimeter and having the frequency range 3000 MHz to 300 GHz. This also includes UHF, EHF and various sources with different boundaries.

Question 9.
How are sidebands produced?
Answer:
Sidebands are produced due to the superposition of carrier wave of frequency ωc over modulating or audio signal of frequency ωm. The frequency of lower sideband is ωc -ωm and the upper side band is ωc+ωm

Question 10.
Why are broadcast frequencies (carrier waves) sufficiently spaced in amplitude modulated wave?
Answer:
To avoid mixing up of signals from different transmitters. This can be done by modulating the signals on high-frequency carrier waves, e.g., frequency band for satellite communication is 5.925 – 6.425 GHz.

Question 12.
What is the function of a bandpass filter used in a modulator for obtaining AM signal?
Answer:
Bandpass filter rejects DC and sinusoid of frequency ωm, 2ωm, and 2ωc and retains frequencies ωc + ωm.
Thus, it allows only the desired frequencies to pass through it.

Now, according to question, the total radiated power is due to energy carried by
ωc, (ωc – ωm) and (ωc +ωm)
Thus to minimize the cost of radiation without compromising on information, ωc can be left and transmitting
(ωc +ωm), (ωc – ωm) or both (ωc +ωm) and (ωc – ωm). Functions are as follows :
(a) Transmitter: It comprises of message signal source, modulator and transmitting antenna. Transmitter makes signals compatible for communication channel via modulator and antenna.
(b) Channel: It is a link for propagating the signal from transmitter to receiver.
(c) Receiver: It recovers the desired original message signals from the received signals at the end of channel.

Question 2.
Explain the terms
(i) Attenuation and
(ii) Demodulation used in communication system.
Answer:
Attenuation: The loss in strength of a signal while propagating through a medium is known as attenuation.
Demodulation: The process of retrieval of information, from the carrier wave at the receiver end. This is the reverse process of modulation.

Question 3.
(a) Distinguish between ‘Analog and Digital signals’.
(b) Explain briefly two commonly used applications of the Internet.
Answer:
(a) A signal that varies continuously with time (e. g., sine waveform) is called an analog signal.
A signal that is discrete is called a digital signal. The presence of signal is denoted by digit 1 and absence is denoted by digit 0. 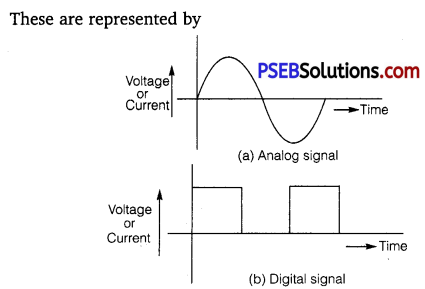 Question 4.
What is ground wave communication? Explain why this mode cannot be used for long-distance communication using high frequencies.
Answer:
The mode of wave propagation in which wave guided along the surface of the earth is called ground wave communication.
The maximum range of propagation in this mode depends on
(i) transmitted power and
(ii) frequency (less than a few MHz)
At high frequencies, the rate of energy dissipation of the signal increases and the signal gets attenuated over a short distance.

Question 6.
Define modulation index. Why is it kept low? What is the role of a bandpass filter? Give its physical significance.
Answer:
Modulation index is the ratio of the amplitude of modulating signal to that of carrier wave. Mathematically,
µ = \(\frac{A_{m}}{A_{c}}\)
Reason: It is kept low to avoid distortion.
Role: A bandpass filter rejects low and high frequencies and allows a band of desired frequencies to pass through it.
Physical Significance: It signifies the level of distortion or noise. A lower value of modulation index indicates a lower distortion in the transmitted signal.

Question 8.
What is space wave propagation? State the factors which limit its range of propagation. Derive an expression for the maximum line of sight distance between two antennas for space wave propagation.
Answer:
Space Wave Propagation
The mode of propagation in which radio waves travel, along a straight line, from the transmitting to the receiving antenna.
Limiting Factors
(i) Curvature of the earth
(ii) Insufficient height of the receiving antenna
(iii) LOS distance (> 40 MHz) travel in straight line 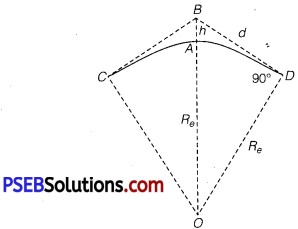 Question 9.
(a) Explain any two factors which justify the need of modulating a low-frequency signal.
(b) Write two advantages of frequency modulation over amplitude modulation
Answer:
(a) (i) If λ is the wavelength of the signal then the antenna should have a length at least \(\frac{\lambda}{4}\)
For an electromagnetic wave of frequency 20 kHz, the wavelength λ is 15 km. Such a long antenna is not possible to construct and operate. So, there is need to modulate the wave in order to reduce the height of antenna to a reasonable height.

(ii) The power radiated by a linear antenna (length l) is proportional to \(\left(\frac{l}{\lambda}\right)^{2}\).
This shows that power radiated increases with decreasing λ. So, for effective power radiation by antenna, there is need to modulate the wave.
(b)

Question 10.
Given reasons for the following :
(i) For ground wave transmission, size of antenna (l) should the comparable to wavelength (λ) of signal, i.e. I = \(\frac{\lambda}{4}\)
(ii) Audio signals converted into an electromagnetic wave are not directly transmitted.
(iii) The amplitude of a modulating signal is kept less than the amplitude of carrier wave.
Answer:
(i) To radiate the signals with high efficiency.
(ii) Because they are of large wavelength and power radiated by antenna is very small as
P ∝ \(1 / \lambda^{4}\)
(iii) It is so to avoid making over modulated carrier wave. In that situation, the negative half cycle of the modulating signal is dipped and distortion occurs in reception.

Question 11.
Which of the following would produce analog signals and which would produce digital signals?(NCERT Exemplar)
(a) A vibrating tuning fork
(b) Musical sound due to a vibrating sitar string
(c) Light pulse
(d) Output of NAND gate
Answer:
Analog and digital signals are used to transmit information, usually through electric signals. In both these technologies, the information such as any audio or video is transformed into electric signals. The difference between analog and digital technologies is that in analog technology, information is translated into electric pulses of varying amplitude. In digital technology, translation of information is into binary formal (zero or one) where each bit is representative of two distinct 4 amplitudes. Thus, (a) and (b) would produce analog signals and (c) and (d) would produce digital signals.

Question 12.
Why is AM signal likely to be more noisy than a FM signal upon transmission through a channel? (NCERT Exemplar)
Answer:
In case of AM, the instantaneous voltage of carrier waves is varied by the modulating wave voltage. So, during the transmission, noise signals can also be added and receiver assumes noise a part of the modulating signal.
In case of FM, the frequency of carrier waves is changed as the change in the instantaneous voltage of modulating waves. This can be done by mixing and not while the signal is transmitting in channel. So, noise does not affect FM signal. Question 2.
(a) Distinguish between sinusoidal and pulse-shaped signals,
(b) Explain, showing graphically, how a sinusoidal carrier wave is superimposed on a modulating signal to obtain the resultant amplitude modulated (AM) wave.
Answer:
(a) In the process of modulation, some specific characteristics of the carrier wave is varied in accordance with the information or message signal. The carrier wave maybe
(i) Continuous (sinusoidal) wave, or
(ii) Pulse, which is discontinuous.
A continuous sinusoidal carrier wave can be expressed as,
E = Eo sin (ωt +Φ)
Three distinct characteristics of such a wave are amplitude (E0), angular frequency (ω) and phase angle fcj)).
Any one of these three characteristics can be varied in accordance with the modulating baseband (AF) signal, giving rise to the respective Amplitude Modulation;
Frequency Modulation and Phase Modulation.

(b) Amplitude Modulation: When a modulating AF wave is superimposed on a high-frequency carrier wave in a manner that the frequency of modulated wave is same as that of the carrier wave, but its amplitude is made proportional to the instantaneous amplitude of the audio, frequency modulating voltage, the process is called amplitude modulation (AM).