Kho Kho Game History
The existence of the game can be traced long back in the state of Maharashtra. It was one of the most popular traditional sport in India.
Earlier during prehistoric period it was played on ‘raths’ or ‘chariots’ and was called Rathera. The basic idea of the game was to ‘Run and Chase.’ The first National Kho- Kho Championship was organized in the year 1960. The Kho-Kho Federation of India (KKFI) came into existence in 1960. Kho- Kho was a part of Berlin Olympic Games in 1936 as a demonstration sport. 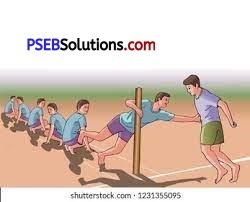 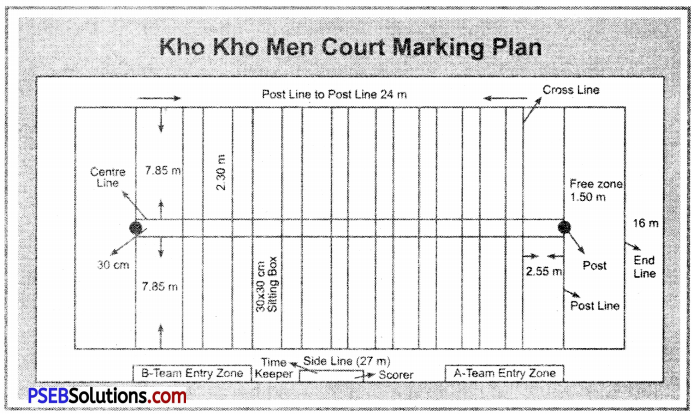 Kho Kho Game Rules And Regulations
1. An inning consists of nine minutes chasing and nine minutes for defending. Eight members of chasing team sit on the squares facing in an alternating direction.
2. The ninth member called chaser or active chaser shall stand at either posts to start the chase.
3. The defender or runner try to avoid being touched by the chaser for maximum duration within the play field.
4. In order to catch the runner or defender, the chasing team member, continue to tap on the back of sitting member with hand and saying “kho” loudly.
5. The team taking lesser time to catch maximum members of opponent team shall be declared winner of the game.
6. It is mendatory to give loud and clear ‘kho’ to a sitting chaser.
7. Once an active chaser has taken a direction towards one pole, he shall not move to opposite direction, unless he turns or touches the posts or posts line. 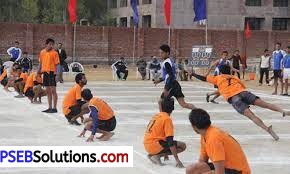 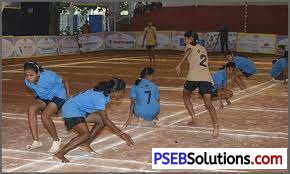 2. Chasing Skills:
Chasing skills includes the way of giving ‘kho’ to the player sitting in blocks with loud and clear voice. It includes running with long steps for a runner at a distance and continuous kho for a runner is a close priority. Further, it can be explained as follow:

(i) Diving: If a chaser feels that the runner is very close to him, can be caught with the horizontal flight. It is mainly a horizontal jump towards runner.

(ii) Thrning at Pole:
It needs a specific training to learn this skill, to turn around the pole. In this one hand is used to hold the pole and another hand is extented over the pole to catch the runner.

3. Dodging: Dodging is particularly a movement that is least expected by the catcher. It is the sudden change of the direction by the runner

Question 1.
What is the dimension of Kho-Kho field?
Answer:
The length of a kho-kho field is 29 m and width is 16 m.

Question 2.
What is the total number of squares in kho-kho field?
Answer:
There are 8 squares of 30 cm x 30 cm in the kho-kho field.

Question 3.
What do you mean by cross lane?
Answer:
This is the exact place where the chaser sits in a crouch position.

Question 4.
What is follow on in kho-kho?
Answer:
If after competing first inning, the points of chasing team exceeds by six or more, the former side shall have the option for later side to follow on.

Question 5.
What is an inning?
Answer:
An inning consists of chasing and running turns of 9 minutes duration for each team.

Question 7.
How many players consists a kho-kho team?
Answer:
Nine players on the field and 3 substitutes.