Badminton Game History
The word ‘Badminton’ originated from the name of city “Badminton”, an estate in Gloucestershire (England). In 1873, the first Badminton club came into existence at England. However, it is believed that similar type of ‘battedore’ named game was a part of China before modem era. 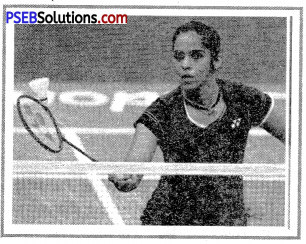 Toss: A toss shall be conducted before the start of game and winning side has the choice to serve or receive first.

Change of Ends: The ends change at the end of first game, second game and in third game after 11 points.

Let Rule:
‘Let’ is a term called by umpire to halt the play.

Dimensions of Play Field / Court or Equipment:
1. The Court:
The size of badminton court is rectangular court with the length of 13,4 metres (44 feet) both for singles and doubles. The width of court is 6.1 metres (20 feet) for doubles and reduced to 5.18 metres (17 feet) for singles. The court is marked with 40 mm wide lines.

2. Posts:
The posts are 1.55 m high from the surface of the court. The posts are fixed on the doubles side lines irrespective of singles or doubles is being played.

4. Racket:
The frame of the racket must be attached with the help of shaft. The racket mainly have three parts head, shaft and throat. The head shall not exceed 280 mm in length and 220 mm in width. The total length of the racket should be 680 mm and width 230 mm. 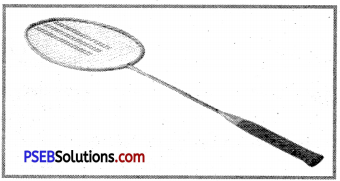 5. Shuttle:
The shuttle may be made from natural or synthetic material. The base of the shuttle i.e. cork must have diameter between 25 to 28 mm. The total length of feather shall be between 62 to 70 mm. The shuttle must weight 4.74 to 5.50 gm. 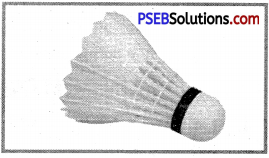 Fundamentai Skills
1. Holding the Racket:
The most important and basic skill in the game is to hold the racket or grip. The wrist while holding the racket should not be stiff. There are mainly two styles of gripping the racket i.e. frying pan grip and back hand grip.

3. Strokes:
The contact between the shuttle and racket is termed as stroke. The different strokes can be categorized mainly into three categories:
(a) Forehand Stroke
(b) Backhand Stroke
(c) overhead stroke.

(a) Forehand Stroke :
This is used most often in the game, this stroke is performed when a shuttle falls in front of active side of tire receiver. Its easy to direct the shuttle to any point of the opponent’s court.

(b) Backhand Stroke:
It is normally difficult shot as the shuttle falls towards non playing side arm of the player. It is difficult to return this shot strongly or forcefully.

(c) Overhead Stroke : The action of hitting a shuttle approaching above the head.

4. Drop Shot:
The drop shots are delicate badminton shots w’hich is mainly executed with a deceptive move to win a point. The purpose of this shot is to force an opponent to make weak return.

5. Lob Shot:
Shuttle hit high and deep to the base line of opponent. In this the high serve played at full stretch with a lunge.

6. Smash: It is an overhead attacking stroke hit hard which forces shuttle to fall sharply downwards in opponent’s court.

Question 1.
When did the International Badminton Federation came into existence?
Answer:
In the year 1934.

Question 5.
Give the number of feathers in a shuttle.
Answer:
14 to 16 feathers.

Question 6.
How many officials are required for badminton match?
Answer:
1 Umpire, 1 Service Umpire, 1 Referee and 10 Linemen.

Question 7.
What do you know about toss in badminton?
Answer:
A toss shall be conducted before the start of the game and winning side has the choice either to serve or receive first.

Question 9.
What is meant by the term deuce?
Answer:
It is a term used when score reaches 20-20. In case of deuce a lead by 2 points must be scored in order to win the game.

Question 10.
What is the height of posts?
Answer:
The posts are 1.55 m high from the surface of the court.