Swimming Game History
Swimming was an ancient game and found on the rock painting at Egypt and Babylonion caves. In India, swimming pool was found in Mohenjodaro’s palace. Swimming became a competitive sport in the early 1800s. It came into prominence when Matthew Webb crossed English Channel. He became the first person to swim across the English Channel. Swimming was one of the events in First Modem Olympic Games held in Athens in 1896.

In the inaugural Modem Olympics men competed in four swimming events and women first participated in the year 1912 Summer Olympics at Stockholm. FINA (International Swimming Federation) was established on 19 July 1908. Swimming Federation of India was formed in 1948. 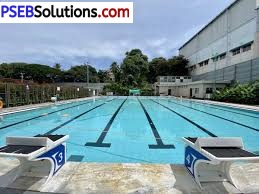 Fundamental Skills:
1. Free Style:
Free style, often called the “crawl,” is the most flexible in its rules, and it is typically the fastest stroke. Freestyle is swum face-down with alternating arm strokes; side-breathing; and rapid, alternating up-and-down kicks.

2. Back Stroke:
Backstroke is often thought of as “upside-down freestyle.” As in freestyle, backstroke is swum with alternating arm strokes and rapid, alternating, up-and-down kicks. Unlike freestyle, the swimmer must be on his/her back, facing the sky.

3. Breast Stroke:
Breaststroke is often thought of as the “frog stroke,” as the kick is reminiscent of a frog’s kick. A breaststroke swimmer’s arms and legs must move simultaneously, on the same horizontal plane, and identically to each other. The arms and legs stay mostly underwater, but a swimmer’s head must break the surface every stroke. So-called scissor kicks are not allowed. The arm stroke begins and ends in streamline position. The hands scoop water out to the sides, before sweeping in toward the middle of the body and then shooting forward. Swimmers are not allowed to pull their hands down past their hips, and must keep their elbows in the water when their hands are shooting forward.

4. Butterfly Stroke:
Butterfly is swum with an undulating, dolphin-like movement at the surface of the water. The arms pull underwater simultaneously, and recover over the water, also simultaneously. Both hands must come out of the water at the same time on every stroke. During each arm pull, swimmers perform two dolphin kicks, one when the hands enter the water, and the other when the hands exit the water. A swimmer’s feet must kick up and down together, ideally with the feet kept close together.

Rules In Swimming:
There are few rules as follow:
The four competitive strokes are
1. Free Style
2. Back Stroke
3. Breast Stroke
4. Butterfly.
Events are held in all of the competitive strokes at varying distances depending on the age- group of the swimmer. In addition, there is a combination of the strokes swum by one swimmer called the individual medley (IM). Other swimming events include relays, which are a group of four swimmers who either all swim freestyle (freestyle relay) or each swim one of the competitive strokes in the order of backstroke, breaststroke, butterfly and freestyle (medley relay).

1. Free Style:
In freestyle events, the competitor may swim any stroke. The stroke most commonly used is sometimes called the crawl, which is characterized by the alternate stroking of the arms over the water surface and an alternating (up- and-down) flutter kick. On turns and finishes, some part of the swimmer must touch the wall. Most swimmers do a flip turn.

2. Back Stroke:
The backstroke consists of an alternating motion of the arms with a flutter kick while on the hack. On turns, swimmers may rotate to the stomach and perform a flip turn and some pari of the swimmer must touch the wall. The swimmer must finish on the back. 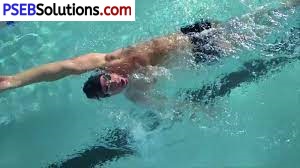 3. Breast Stroke:
The breaststroke requires simultaneous movements of the arms on the same horizontal plane. The hands are pressed out from in front of the breast in a heart shaped pattern and recovered under or
on the surface of the water. The kick is a simultaneous somewhat circular motion similar to the action of a frog. On turns and at the finish, the swimmer must touch the wall with both hands simultaneously at, above or below the water surface. 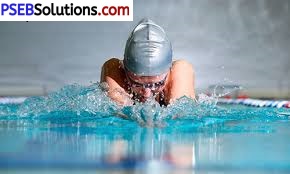 4. Butterfly:
The butterfly features a simultaneous recovery of the arms over the water combined with an undulating dolphin kick. In the kick, the swimmer must keep both legs together and may not flutter, scissors or use the breaststroke kick. Both hands must touch the wall simultaneously on the turns and the finish, 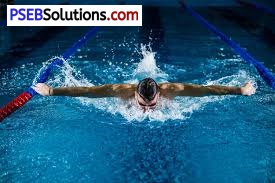 5. Individual Medley:
Commonly referred to as the I.M., features all four strokes. In the EM. the swimmer begins with the butterfly, then changes after one-fourth of the race to backstroke, then breaststroke and finally freestyle.

6. Starts:
The swimmers are not allowed a false start. If they jump the start and the starter thinks they are trying to get an advantage, they will be taken out of the race. This is not like the Olympics where they are allowed two false starts.

Turns And Finishes:
Technical rule violations for each stroke may include:
1. Free Style:
Feet have to touch the wall.

2. Back Stroke:
Swimmers have to be on their back when they touch the wall. After he/she touches, he/she can then turn around, but he/she must push off on their back. At the finish a swimmer must finish on his/her back. A swimmer may not roll over and grab the wall until they have first touched it.

Swimming Game Important Terminologies
1. Lane Line:
In swimming, a specific lane is assigned to swimmer. These lanes often are numbered. The assigned lane is your designated swimming area. The lanes are separated by lane lines, or floating markers attached to cables.

2. Flag:
Rags are triangular banners featuring two or more colors and hanging down over the lanes on lines. Backstroke flags are placed at the end of each lane to let the swimmers performing backstroke, who have limited visibility, know that they are approaching the wall.

3. Deck and Lap:
The pool is surrounded by a hard surface called a deck. When an athlete swim from one end of a pool to the other, the distance is commonly called a lap, although a lap also can be used to mean the down-and-back distance that is twice the length of the pool.

4. Back Stroke:
Breast Stroke and Freestyle. The backstroke, is performed lying on the back. The breaststroke, in which a swimmer keep his body on his breast. The freestyle, or crawl, is the most common stroke, which is performed on stomach while alternating your arms and using a flutter kick.

5. Diving and Relay: Other common terms include diving, a method of entering the water by jumping in head first.

Question 4.
How many lanes are in the swimming pool?
Answer:
Total numbers of the lane are 08 in the pool.