Question 1.
Which of the following is a natural polymer? Buna-S, Proteins, PVC
Answer:
Proteins.

Question 2.
Can enzyme be called a polymer? [NCERT Exemplar]
Answer:
Enzymes are biocatalysts which are proteins and are thus polymers.

Answer:
Chain growth polymerisation, as there is no loss of small molecules like water; methanol, etc.

Question 7.
Can nucleic acids, proteins and starch be considered as step growth polymers? [NCERT Exemplar]
Answer:
Yes, step-growth polymers are condensation polymers and they are formed by the loss of simple molecules like water leading to the formation of high molecular mass polymers.

Question 8.
Write the structure of the monomer used for getting the melamine-formaldehyde polymer.
Answer:
Melamine and formaldehyde

Question 9.
How is the following resin intermediate prepared and which polymer is formed by this monomer unit?

Answer:
Melamine and formaldehyde are starting materials for this intermediate. Its polymerisation gives melamine polymer.

Question 1.
Which of the following polymers soften on heating and harden on cooling? What are the polymers with this property collectively called? What are the structural similarities between such polymers? Bakelite, urea-formaldehyde resin, polythene, polyvinyls, polystyrene. [NCERT Exemplar]
Answer:
Polythene, polyvinyls and polystyrene soften on heating and harden on cooling. Such polymers are called thermoplastic polymers. These polymers are linear or slightly branched long-chain molecules. These possess intermolecular forces whose strength lies between strength of intermolecular forces of elastomers and fibres.

Question 4.
Differentiate between rubbers and plastics on the basis of intermolecular forces. [NCERT Exemplar]
Answer:
Rubber is a natural polymer which possess elastic properties. Natural polymer is a linear polymer of isoprene (2-methyl-1, 3-butadiene).
In natural rubber cis-polyisoprene molecules consists of various chains held together by weak van der Waals’ interaction and has coiling structure. So, it can be stretched like a spring.

Plastics are generally polymers of ethene known as polythene. Polythene is thermoplastic polymer which may be linear (HDP) or branched (LDP) these type of polymers. Possesses intermediate intermolecular forces of attraction. It has linear, structure that can be moulded but can’t be regained on its original shape after stretching.

Question 5.
A natural linear polymer of 2-methyl-l, 3-butadiene becomes hard on treatment with sulphur between 373 to 415 K and -S-S- bonds are formed between chains. Write the structure of the product of this treatment? [NCERT Exemplar]
Answer:
The product is called vulcanised rubber. Its structure is as follows : Question 6.
Name the type of reaction involved in the formation of the following polymers from their respective monomers
(i) PVC.
(ii) Nylon6.
(iii) PHBV.
Answer:
(i) Addition
(ii) Condensation/Hydrolysis
(iii) Condensation.

Question 1.
Explain the following terms giving a suitable example for each:
(i) Elastomers
(ii) Condensation polymers
(iii) Addition polymers
Answer:
(i) Elastomers: These are the polymers having the weakest intermolecular forces of attraction between the polymer chains. The weak forces permit the polymer to be stretched. A few ‘cross links’ are introduced between the chains, which help the polymer to retract to its original position after the force is released as in vulcanised rubber. Elastomers thus possess an elastic character. For example, buna-S, buna-N, neoprene, etc. 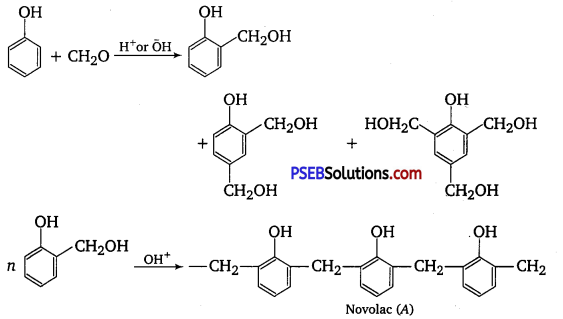 Structural difference in between these two is that novolac is a linear polymer while bakelite is a cross-linked polymer.