Question 3.
A calorie is a unit of heat or energy and it equals about 4.2 J where 1 J = 1 kgm2 s-1.
Suppose we employ a system of units in which the unit of mass equals a kg, the unit of length equals β m, the unit of time is y s. Show that a calorie has a magnitude 4.2 α-1β-2γ2 in terms of the new units.
Solution:
Given that,

Question 4.
Explain this statement clearly:
“To call a dimensional quantify Targe’ or ‘small’ is meaningless without specifying a standard for comparison”. In view of this, reframe the following statements wherever necessary:
(a) atoms are very small objects
(b) a jet plane moves with great speed
(c) the mass of Jupiter is very large
(d) the air inside this room contains a large number of molecules
(e) a proton is much more massive than an electron
(f) the speed of sound is much smaller than the speed of light.
Answer:
The given statement is true because a dimensionless quantity may be large or small in comparision to some standard reference. For example, the coefficient of friction is dimensionless. The coefficient of sliding friction is greater than the coefficient of rolling friction, but less than static friction.

(a) An atom is a very small object in comparison to a soccer ball.
(b) A jet plane moves with a speed greater than that of a bicycle.
(c) Mass of Jupiter is very large as compared to the mass of a cricket ball.
(d) The air inside this room contains a large number of molecules as compared to that present in a geometry box.
(e) A proton is more massive than an electron.
(f) Speed of sound is less than the speed of light.

(c) Least count of an optical device = Wavelength of light ~10-5 cm
= 0.00001 cm
Hence, it can be inferred that an optical instrument is the most suitable device to measure length.

Question 8.
Answer the following
(a) You are given a thread and a metre scale. How will you estimate the diameter of the thread?

(c) The mean diameter of a thin brass rod is to be measured by vernier callipers. Why is a set of 100 measurements of the diameter expected to yield a more reliable estimate than a set of 5 measurements only?
Answer:
(a) Wrap the thread on a uniform smooth rod in such a way that the coils thus formed are very close to each other. Measure the length of the thread using a metre scale. The diameter of the thread is given by the relation,
Diameter = \(\frac{\text { Length of thread }(l)}{\text { Number of turns }(n)}\)

(c) A set of 100 measurements is more reliable than a set of 5 measurements because random errors involved in the former are very less as compared to the latter.

(c) The given quantity is 0.2370 g cm-3.
For a number with decimals, the trailing zeroes sire significant. Hence, besides digits 2, 3 and 7, 0 that appears after the decimal point is also a significant figure.

(e) The given quantity is 6.032 Nm-2.
All zeroes between two non-zero digits are always significant.

(b) Difference in masses = 20.17 – 20.15 = 0.02 g
In subtraction, the final result should retain as many decimal places as there are in the number with the least decimal places.

But the argument of the trigonometric function must be dimensionless, which is not so in the given case. Hence, the formula is dimensionally incorrect.

Since the argument of the trigonometric function must be dimensionless (which is true in the given case), the dimensions of y and a are the same. Hence, the given formula is dimensionally correct.

Question 15.
A famous relation in physics relates ‘moving mass’ m to the ‘rest mass’ m0 of a particle in terms of its speed v and the speed of light, c. (This relation first arose as a consequence of special relativity due to Albert Einstein). A boy recalls the relation almost correctly but forgets where to put the constant c. He writes:
m = \(\frac{m_{0}}{\left(1-v^{2}\right)^{\frac{1}{2}}}\)

Hence, the molar volume is 7.08 × 104 times higher than the atomic volume. For this reason, the inter-atomic separation in hydrogen gas is much larger than the size of a hydrogen atom.

Question 18.
Explain this common observation clearly: If you look out of the window of a fast moving train, the nearby trees, houses etc. seem to move rapidly in a direction opposite to the train’s motion, but the distant objects (hill tops, the Moon, the stars etc.) seem to be stationary. (In fact, since you are aware that you are moving, these distant objects seem to move with you).
Answer:
Line of sight is defined as an imaginary line joining an object and an observer’s eye.

When we observe nearby stationary objects such as trees, houses, etc. while sitting in a moving train, they appear to move rapidly in the opposite direction because the line of sight changes very rapidly.

On the other hand, distant objects such as trees, stars, etc. appear stationary because of the large distance. As a result, the line of sight does not change its direction rapidly.

Question 19.
The principle of ‘parallax’ is used in the determination of distances of very distant stars. The baseline AB is the line joining the Earth’s two locations six months apart in its orbit around the Sun. That is, the baseline is about the diameter of the Earth’s orbit ≈ 3 × 1011 m. However, even the nearest stars are so distant that with such a long baseline, they show parallax only of the order of 1″ (second) of arc or so. A parsec is a convenient unit of length on the astronomical scale. It is the distance of an object that will show a parallax of 1″ (second) of arc from opposite ends of a baseline equal to the distance from the Earth to the Sun. How much is a parsec in terms of metres?
Solution:
The parallax (θ) of a star is the angle made by semi-major axis of the Earth’s orbit ⊥ to the direction of the star as shown figure.
b = AB = Base line
= Diameter of Earth’s orbit
= 3 × 1011 m 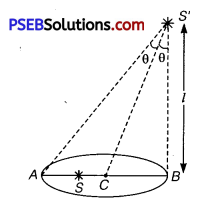 Question 21.
Precise measurements of physical quantities are a need of science. For example, to ascertain the speed of an aircraft, one must have an accurate method to find its positions at closely separated instants of time. This was the actual motivation behind the discovery of radar in World War H. Think of different examples in modern science where precise measurements of length, time, mass etc. are needed. Also, wherever you can, give a quantitative idea of the precision needed.
Solution:
Precise measurement of physical quantities such as length, time, mass etc. is a basic requirement of development of astronomy, nuclear physics, medical sciences, crystallography etc.

In the measurement of astronomical distances such as the distance of moon from earth by laser beam, an accurate measurement of time is required. A very small mistake in the measurement of that time can produce a large mistake in the accurate distance of moon from the earth which can be a cause of failure to reach the moon. This time is of the order of 10-9 s.
In atomic or nuclear reactions, in nuclear weapons and in nuclear power plants a precise measurement of mass and time is required which is of the order of 10-9 kg and 10-9s. A small mistake can be a cause of an accident such as take place in Japan recently.

(c) Wind speed during a storm can be measured by an anemometer. As wind blows, it rotates. The rotation made by the anemometer in one second gives the value of wind speed.

(d) If we assume a uniform distribution of strands of hair on our head then,

Then, area of cross-section of human hair

The mass density of the Sun is in the density range of solids/liquids and not gases. This high density is attributed to the intense gravitational attraction of the inner layers on the outer layer of the Sun.

Question 25.
A man walking briskly in rain with speed υ must slant his umbrella forward making an angle 6 with the vertical. A student derives the following relation between θ and υ: tanθ = υ and checks that the relation has a correct limit: as υ → 0, θ → 0, as expected. (We are assuming there is no strong wind and that the rain falls vertically for a stationary man). Do you think this relation can be correct? If not, guess the correct relation.
Solution:
The relation is tanθ = υ.
Dimension of R.H.S. =M0L1T-1
Dimension of L.H.S. = M0 L0 T0
( ∵ The trigonometric function is considered to be a dimensionless quantity)
Dimension of R.H.S. is not equal to the dimension of L.H.S. Therefore, the given relation is not correct.
To make the given relation correct, the R.H.S. should also be dimensionless. One way to achieve this is by dividing the R.H.S. by the speed of rainfall u.
Therefore, the relation reduces to tanθ = \(\frac{v}{u}\) This relation is dimensionally correct.

Yes, both densities are of the same order of magnitude, i.e., of the orderof 103.
This is because in the solid phase atoms are tightly packed, so the atomic mass density is close to die mass density of the solid.

Question 32.
It is a well known fact that during a total solar eclipse the disk of the moon almost completely covers the disk of the Sun. From this fact and from the information you can gather from examples 2.3 and 2.4, determine the approximate diameter of the moon.
Solution:
The position of the Sun, Moon, and Earth during a lunar eclipse is shown in the given figure.

Question 33.
A great physicist of this century (PAM. Dirac) loved playing with numerical values of Fundamental constants of nature. This 1 led him to an interesting observation. Dirac found that from the basic constants of atomic physics (c, e, mass of electron, mass of proton) and the gravitational constant G, he could arrive at a number with the dimension of time. Further, it was a very large number, its magnitude being close to the present estimate on the age of the universe (~15 billion years). From the table of fundamental constants in this book, try to see if you too can construct this number (or any other interesting number you can think of). If its coincidence with the age of the universe were significant, what would this imply for the constancy of fundamental constants?
Solution:
Few basic constants of atomic physics are given below
e = Charge of electrons = 1.6 × 10-19C
ε0 = Absolute permittivity = 8.85 × 10-12N-m2/C2
mp = Mass of protons = 1.67 × 10-27kg
me = Mass of electrons = 9.1 × 10-31 kg
c = Speed of light = 3 × 108 m/s
G = Universal gravitational constant = 6.67 × 10-11 N-m2 kg-2
One relation consists of some fundamental constants that give the age of the Universe by: 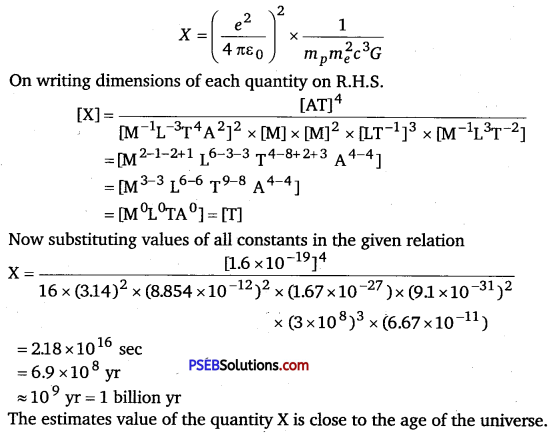