The thickness of each line is 2 cms. Each lane is 2.10 m. long Each outside lane and pole line are 2.25 metres from each other Each pole line is farther from outside boundary by 2.70 metres. There is a lobby 3 metre wide along the four sides of the playground.

1. Posts:
Two posts are fixed at the end of the central lane. Thej are 1.20 cms. high above the ground. Their circumference cannot be less than 30 cms and not more than 40 cms.

3. Cross Lane:
Each rectangle is 15 m. long and 30 cm. wide. It crosses the central lane at right angles (90°). It is itself divided into two halves. It is called cross-lane.

5. The Line of the Post:
The line that goes to the centre of the post, parallel to cross lanes, is known as the line of the post.

6. Rectangle:
The area which is outside the line of post is known as rectangle. 7. Limits:
The lines on both sides and at a distance gf 7.30 m. from the central line, and parallel to it, are called limits.

8. Chasers:
The players who sit in the squares are called chasers. A player who actively pursues the players of the rival team is termed an active chaser.

9. Runners:
The players of the opposite side other than those of chasers are called runners.

10. To give Kho:
In order to give good Kho, an active chaser should touch the sitting chaser from behind, uttering clearly and loudly the word “Kho”. The action of touching and uttering of the word “Who” should be done simultaneously.

11. Foul:
If a sitting or active chaser breaks any rule, that is called a foul.

12. To take a Direction:
The taking of direction is to go from one post to another post.

13. To turn the Face:
At a time when an active chaser, going in a particular direction, turns his or her shoulders at 90°, he or she is said to have turned the face. It is a foul.

14. Returning:
When the active chaser, going in a particular direction, changes his direction to the opposite, he or she is said to have returned or receded. This is also a foul.

15. To Leave the Post Line:
When an active chaser leaves hold of a post, and leaves the rectangle or goes beyond it, such actions are known as leaving the post line.

16. Foot Out:
When a runner’s feet touch the ground outside the limits, it is called Foot-out, and the runner is out.

17. Lona:
When all runners are out within 7 minutes, the chaser will mark “Lona” against the runners. But no point is awarded for “Lona.”

How to begin the Play:
The game of Kho-Kho is started with a toss. The toss winning captain of the team shall decide to touch or be touched, and inform the referee about his decision. The players who sit are called chasers. The opposing players of the chasers are known as runners. Except one chaser, all the chasers sit in such a way that no two adjacent chasers face the same side. At the start of the game, the ninth chaser stands near a pole. When the referee whistles, the action of touching begins.

Question 2.
Discuss the rules in the Kho-Kho game?
Answer:
Rules Of The Play

Question 3.
Discuss the rules of the match in the Kho-Kho game?
Answer:
Rules About the Match

1. Each team shall have 9 members with 3 extras.

2. Each innings shall Mve four running and chasing turns which shall be of 7-7 minute duration. The two innings are for touching, and two for running.

3. Before the start of the match the captains of both teams shall decide about the turn of chasers or runners by toss.

4. Runners, in order of playing, shall get their names recorded with the scorer. At the beginning of a turn, the first three players shall be within the limit. When these three players are out, the next three shall succeed them before the kho is given. The players who fail to enter within that period shall be out. The players who enter out of turn shall also be declared out. This process will continue until the end of the term. The active chaser who has removed the third runner shall not pursue the newly entered runner. He will give Kho. The runners of each team shall enter the field from one side only.

5. The chaser and the runner have the option to end the turn before the given time. The captain of the runner or chaser team shall inform about his decision to the referee, and shall request the referee to declare the turn close. On such a request, the referee shall stop the game to end the turn. There shall be a rest of two minutes after this turn, and of five minutes in between two innings.

6. The chaser, on each runner’s being out, shall score one point. A ‘Lona’ is scored against all the runners who are out before time. Afterwards, that team sends its runners in the same turn. No extra point is given for scoring a Lona. The play shall continue in the same way until the close of the innings. The order of runners during the innings can be changed.

In the league system, the winning team scores two points and the losing one scores zero point, and in case of a tie, each team is awarded one point. If in a league system, the league points are equal, the team or teams shall replay the game by lots. Such matches shall be played on knock-out system.

8. If due to any reason match is not completed, it shall be played at some other time, and the previous score shall not be counted. The match shall be replayed from the beginning.

10. If a player gets hurt during the play, he can be replaced by a substitute on the referee’s permission.

Question 4.
Mention the number of officials conducting the game of Kho-Kho?
Answer:
Officials:
The following officials are appointed to conduct the match:

1. Umpire:
The umpire shall stand outside the lobby ground and shall supervise the match from the central lane. He shall give all decisions of his half, and shall help the other umpire to make correct decisions in the other half.

2. Referee:
There is only one referee in the game of Kho-Kho. His duties as referee are as follows:

3. Time Keeper:
The duty of the time keeper is to record time. He signals the start and the end of the innings by blowing a whistle.

4. Scorer:
The scorer makes it certain that the players enter the field in accordance with the approved order. He keeps a record of the runners who are out. At the end of each term, he enters makes on the score sheet and prepares the score of the chasers. At the end of the match, he prepares the result and hands over the same to the referee for announcement.

Question 5.
Write down the score sheet of Kho-Kho game.
Answer: 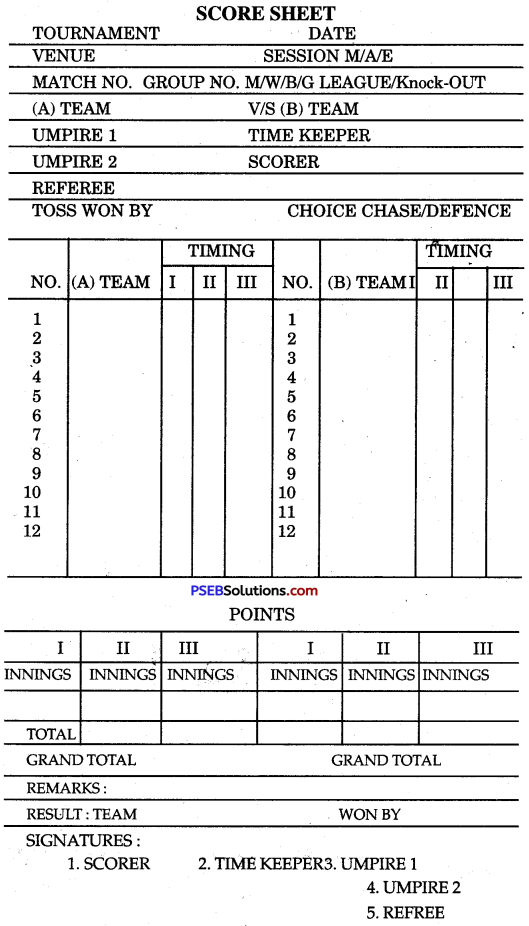 Important Information About the Kho-Kho Game