Question 1.
Describe the Judo playground, Officials, Costume and Duration of the bout.
Answer:
Playground:
Judo playground is called ‘Shiajo’. It is a square platform. Its each side is 30 feet. It is at some height from the ground. It is covered with 50 mat pieces of canvas. Each mat piece is 3 x 6 in size.

Officials:
Normally, three officials conduct Judo. One of them is a referee and the other two are judges. The bout is conducted by the referee whose decision is final. No appeal can be made against his decision. Keeping himself in the playground, the referee keeps a watch on the performance of the players. 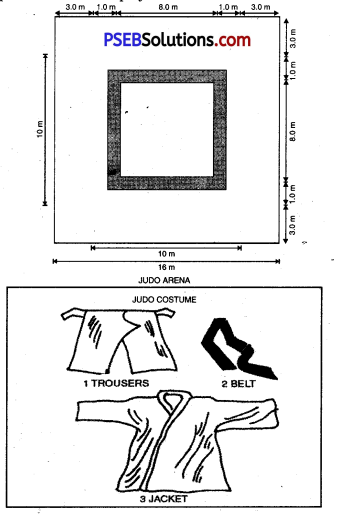 Costume:
The Judo player’s dress is known as ‘Judogi’. In case ‘Judogi’ is not available, a player can wear a dress the belt of which is so long as to cover the body twice. After a square knot is tied, 3 inch belt on each side is left. The jacket should be so long that it covers the hips after being tied with a belt. The sleeves should be loose. There should be a gap of 114 inches between the cuffs and i sleeves and should hang upto the mid-arm. Trousers used should also be quite loose. The Judo player cannot wear ring, bracelet, etc. because they may injure a player. Finger nails of players should be properly pared.

Question 2.
Mention the various rules which players of Judo have to follow during competition.
Answer:
Rules for Judo Players:

The Start of Judo Play and Various Techniques:
Start of Judo Competition. The Judo competitors should stand at a distance of 12 feet from each other. Their faces should be in front of each other. They salute each other in the standing position. Then the referee begins the bout by uttering the world ‘Hijame’ which means ‘begin’.

Judo Techniques:
The following techniques are adopted in Judo-

These two techniques are taken into account while giving a decision. Normally, the decision is not given more than one ‘Ippon’ (one full point). Important Information about the Judo Game