Question 1.
Describe about the Table, Net, Ball and Racket in the game of Table Tennis?
Answer:
Table:
In table tennis, the table used is of rectangular shape. It is 2.74 metres in length and 1.52 metres in width. Its height from the ground is 76 cm. It can be made of any material. A ball when dropped from a height of 30.5 cm. on its surface shall give a bounce of not less than 22 cm. and not more than 25 cm. 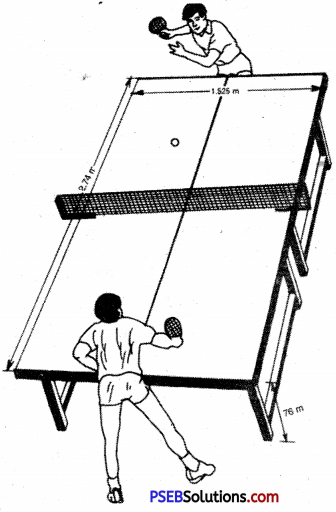 Rackets:
The racket may be of any size, shape or weight. But its surface should be of dark colour. This game has 21 points.

Good Service:
The server places the ball on the palm of his free hand, open and flat, with fingers pressed together and thumb free. Then he shall project the ball in the air and do the service in a manner that the ball remains visible to the judge. Then the ball shall be struck in a way that it touches the server’s court and passes directly over or around the net, and touches the receiver’s court.

Good Return:
After having been served or returned in play, the ball shall be so struck as to pass directly over or around the net. It should touch directly the opponent’s court.

Ball in Play:
The ball is in play when it is projected from the hand for service. It shall be deemed to be in play until:

A let:
A ball in play is called rally. A rally may be let if:

Question 3.
How are points scored in the game of Table Tennis?
Answer:
Points:
A player shall lose a point in case:

The Choice of Ends and Service

Change the Ends and Service

The change of ends and service shall be made in the following manner:

In the play, a player or pair who starts a game at one end shall be at the other end in the second game, and so on. This will continue till the end of the match. The ends change when any player or pair score first ten points in the last possible game in a match. In Singles, the service is changed after five points, which means that the server shall become receiver, and recevier shall become server.

Out of Order of Ends, Serving or Receiving

In case the players have not changed ends in time, they shall change the ends as soon as the mistake is detected provided the game is not completed. In case the game has been completed, all points scored shall be counted. If a player serves or receives out of turn, the play shall be stopped as soon as the error is detected. The game shall be started again by the server who was serving at the start of the game, or at the time when the score was 10. In such circumstances, the scores made before the error is detected shall be counted.