Question 1.
What is the term used for secretions of endocrine glands responsible for changes taking place in the body ?
Answer:
Hormones.

Question 2.
Define adolescence.
Answer:
Adolescence.
The period of life, when the body undergoes changes, leading to reproductive maturity is called adolescence. Adolescence begins around the age of 11 and lasts upto 18 or 19 years of age. The adolescents are also called “teenagers”. Adolescence in girls may begin a year or two earlier than in boys. Also the period of adolescence varies from person to person.

Question 3.
WTaat is Menstruation ? Explain.
Answer:
Menstruation.
The rhythmic changes in the uterus which occur about every 28 days throughout the reproductive cycle of women except the pregnancy is called menstrual cycle. The female sex hormones initiate the thickening of the uterine wall for the implantation of a fertilized ovum. If the ovum is not fertilized, the lining wall is broken down the discharge from the body. This is called menstruation. Normally the menstrual cycle starts at the age of 10-14 years and stops at the age of 45-50 when menopause is reached.

Question 4.
List changes in the body that takes place at puberty.
Answer:
Puberty. Puberty is period between the age of 11 to 19 years. Following changes take place at the onset of puberty.

Question 6.
What are sex hormones ? Why are they named so ? State their function.
Answer:
Sex hormones.
There are the hormones secreted by testes in males and ovaries in females. They are named so because they are secreted by male and female sexes separately.

Male Sex hormone (Testosterone).
It is secreted by testes. It causes changes in boys like growth of facial hair. It also stimulates spermatogenesis.

Female sex hormone (Estrogen).
It is secreted by ovaries. It controls the development of secondary sexual characters in females, appearance of mammary glands etc. It maintains pregnancy. 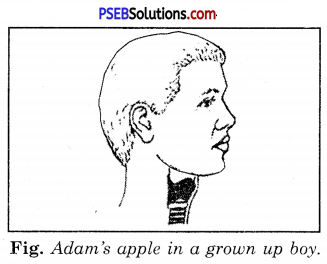 At puberty boys develop larger voice box or larynx. This box in boys is seen as a protruding part of the throat called Adam’s apple.

(b) Secondary sexual characters.
We know testis and ovaries are the reproductive organs. They produce the gametes i.e. sperms and ova. In girls, breasts begin to develop at puberty and boys begin to grow facial hair, i.e. moustaches and beard. As these features help to distinguish the male from the female they are called secondary sexual characters. Boys also develop hair on their chest. In both boys and girls hairs grow under the arms and in the region above the thighs or the pubic region. 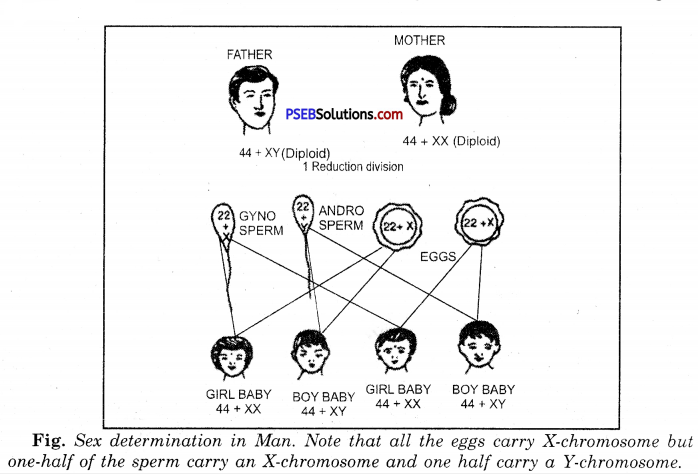 Question 9.
Word game : Use the clues to work out the words.
Across
3. Protruding voice box in boys
4. Glands without ducts
7. Endocrine gland attached to brain
8. Secretion of endocrine glands
9. Pancreatic hormone
10. Female hormone 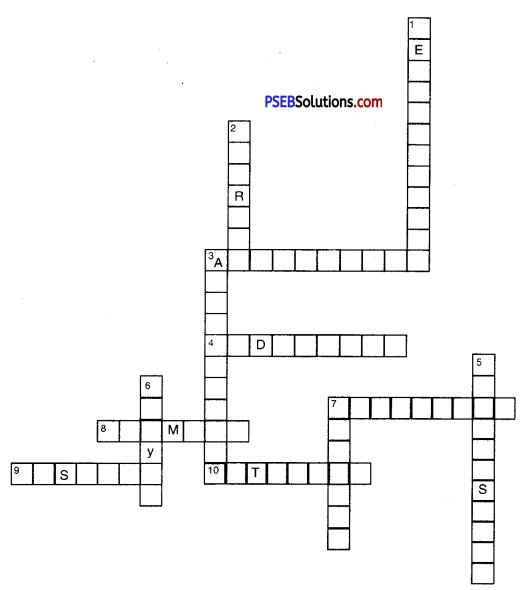 Question 10.
The table below shows the data on likely heights of boys and girls as they grow in age. Draw graphs showing height and age for both boys and girls on the same graph paper. What conclusions can be drawn from these graphs? 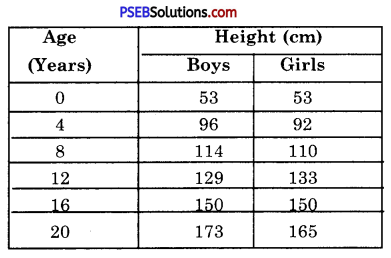 The above graph shows that the increase in the growth in heights of boys and girls is same. The increase in growth is less in girls upto first eight years and after that it remains the same upto twenty years.

Question 4.
The stoppage of menstrual cycle is called:
(a) Menopause
(b) Menstruation
(c) Metaphorsis
(d) None of these.
Answer:
(a) Menopause.

Question 4.
When do human stop growing ?
Answer:
Human stops growing after about 20-25 years of age.

Question 5.
What is the main element of thyroxine hormone ?
Answer:
Iodine.

Question 6.
In which part adrenaline is produced ?
Answer:
Adrenal gland.

Question 8.
Name the following:
(i) The types of glands that secrete hormones.
(ii) The other name of hormones.
(iii) The gland which is called ‘Master gland’.
(iv) The hormone secreted by thyroid gland.
(v) The disease caused by the deficiency of iodine.
(vi) The hormones that control blood glucose level.
(vii) The gland which produces the so called ‘emergency hormone’.
Answer:
(i) Endocrine glands or ductless glands
(ii) Chemical coordinators
(iii) Pituitary gland
(iv) Thyroxine
(v) Goitre
(vi) Insulin and glucagon
(vii) Adrenalin.

Question 10.
How many chromosomes are found in human cells ?
Answer:
46 (44 autosomes and a pair of sex chromosomes).

Question 12.
The glands which pour their secretions directly into the blood stream is called ……………. ?
Answer:
Endocrine glands.

Question 13.
What is target site ?
Answer:
Target Site. Target site is a body part where the hormones act.

Question 17.
What are the sex chromosomes in males and females ?
Answer:
Females have two X-chromosomes (XX), Males have one X and one Y-chromosome (XY).

Question 19.
Name the hormones which control metamorphosis in insects and frog.
Answer:
In insects-Insect hormone In frog-Thyroxine.

Question 21.
What is the legal age of marriage in India ?
Answer:
The legal minimum age for marriage is 18 years for girls and 21 years for boys.

Question 1.
How does hormone affect a girl’s body between the age of 10-15 years ?
Answer:
Hormones affect girl’s body by making the breast to become bigger and hips becoming more rounded.

Question 2.
How does hormone affect a boy’s body between the age of 11-16 years ?
Answer:
In boy’s body, the following changes are caused by hormones:

Question 3.
Write short notes on :
(i) Menstruation
(ii) Menopause.
Answer:
(i) Menstruation.
Destruction of the mucous membrane of foetus and consequent bleeding which occur periodically in human and other mammals.

(ii) Menopause.
Stoppage of menstrual flow and other events is called menopause. It occurs between 45 to 55 years.

Question 4.
Explain sexual cycle in human female.
Answer:
Sexual cycle.
The rhythmic changes in the uterus which occur about every 28 days throughout the reproductive cycle of woman except the pregnancy period is called menstrual cycle. The female sex hormones initiate the thickening of the uterine wall for the implantation of a fertilized ovum.

If the ovum is not fertilized, the lining wall is broken down and discharged from the body. This is called menstruation. Normally the menstrual cycle starts at the age of 10-14 years and stops at the age of 45-50 when menopause is reached.

If the ovum is fertilized by sperm, the zygote develops in the wall of uterus and developing embryo called foetus is nourished by placenta. During the period, ovulation or ‘menstruation does not occur. However these activities are restored after child birth.

Question 7.
Differentiate between menarch and menopause.
Answer:
Differences between Menarch and Menopause

Question 8.
Write whether True (T) or False (F):
(i) Fertilization is process of fusion of sperm and ovum.
Answer:
True

(iii) Onset of menstruation is termed as menopause.
Answer:
False

Question 10.
Which gland secretion reduces pituitary secretion ?
Answer:
Increased secretion of thyroxin from the thyroid gland reduces the production of hormones by the pituitary gland. Question 15.
Why do adolescents become independent than before ?
Answer:
Adolescents are more independent than before and are also self conscious. It is a period of change in a person’s way of thinking. Intellectual development takes place and they tend to spend more time in thinking. In fact, it is often the time in one’s life when the brain has the greatest capacity for learning. Sometimes, however, an adolescent may feel insecure while trying to adjust to the changes in the body and mind.

Question 16.
How will you explain that sex hormones are under the control of pituitary glands ?
Answer:
The sex hormones are controlled by pituitary gland. The gland secretes many hormones, one of which is FSH or Follicle Stimulating Hormone. It makes ova and sperms mature in the ovaries and testis respectively. It can be shown as follows:
Hormones from pituitary stimulates gonads to release Testosterone (in male) and Estrogen (in female)
Released in the blood stream and reach parts of the body (Target site)
Stimulate changes in the body and onset of puberty.

Question 17.
Adolescent should say ‘No’ to the drugs. Why ?
Answer:
Adolescence is a period of much activity in the body and mind. So, do not feel confused or insecure. If anybody suggests that you will get relief if you take some drugs, just say ‘No’ unless prescribed by doctor. We know that drugs are addictive, if you take them once, you feel like taking them again and again. They harm the , body in the long run. They ruin health and happiness.

Question 18.
Give some myths about adolescents.
Answer:
One comes across many myths and taboos. We should discard them. These myths are as follows-

Question 19.
What changes occur in voice at the time of puberty ?
Answer:
At puberty, the boys develop larger voice box and it can be seen as a protruding part. The voice of boys becomes hoarse and cracked due to increase in larynx. Such kind of difference is not visible in the voice box or larynx of girls. The girls have a high pitched and sweet voice due to smallness of larynx.

Question 22.
What is reason behind this fact that boys and girls should not be married in young age ?
Answer:
In young age, the body of adolescents, especially reproductive organs, are not ready for motherhood. If marriage takes place in such a situation, then such couples may face many health problems which can cause stress. In our country, the legal age for marriage is 18 years for girls and 21 years for boys when adolescents are allowed to get married. The adolescents below this age are not allowed to marry under the law of marriage and it is legally wrong doing so.

Question 23.
Why there is great possibility of disease HIV-AIDS in adolescents ?
Answer:
Many adolescents start taking drugs to make themselves stress free. By taking drugs from HIV contaminated needle of injection, this dangerous virus spreads in other adolesqents. The other reason of spreading this virus is unsafe sexual relationship. In many cases, this virus may enter in infants through the milk of mother.
So,it is very necessary for adolescents to remain aware to save their precious life from HIV.

Question 24.
List any two changes in the body that take place at puberty.
Answer:
Changes taking place in boys at puberty.

Question 1.
Give a chart showing the average rate of growth in height with age.
Answer: Question 2.
Describe the various conditions or factors needed for keeping the body healthy during adolescence.
Answer:
During adolescence following conditions are essential for healthy body—
1. Nutritional needs.
Adolescence is a stage of rapid growth and development, hence the diet for an adolescent has to be carefully planned. A balanced diet means that the meals should include proteins, carbohydrates, fats, vitamins and minerals in the requisite proportion. Our Indian meal of roti/rice, dal (pulses) and vegetables, milk, fruits is a balanced meal.

Chips and packed or tinned snacks, though very tasty should never replace regular meals as they do not have adequate nutritional value. 2. Personal hygiene.
Having bath at least once everyday is more necessary for teenagers because the increased activity of sweat glands sometimes makes the body smelly. All parts of the body should be washed and cleaned everyday. If cleanliness is not maintained, there are chances of catching bacterial infection. Girls should keep track of their menstrual cycle and be prepared for the onset of menstruation. Undergarments should be changed everyday. Cotton undergarments should be preferred.