Question 4.
Supose your writing desk is tilted a little. A book kept on it starts sliding down. Show the direction of frictional force acting on it.
Answer:
Upward direction.

Question 5.
You spill a bucket of soapy water on a marble floor accidently. Would it make it easier or more difficult for you to walk on the floor ? Why ?
Answer:
Soapy water will make the walking more difficult.
Soapy floor acts as a smooth surface as it has no irregularities in it and soap is also very slippery in nature. So, when we walk on soapy floor, we do not have opposing force with the result we slip.

Question 7.
Iqbal has to push a lighter box and Seema has to push a similar heavier box on the same floor. Who will have to apply a larger force and why ?
Answer:
Seema will experience a more frictional force since heavier box applies greater pressure on the floor as compared to lighter box due to its weight.

Question 8.
Explain why sliding friction is less than static friction.
Answer:
When a body is at rest, then the force active between the two surfaces in contact is more due to irregularities on two surfaces locked into one another.

But when a body is moving or sliding, the contact points do not get enough time to lock into one another. So sliding friction is always less than’ static friction.

Question 9.
Give examples to show that friction is both a friend and a foe.
Answer:
Friction as a friend.

Friction as a foe.

Question 10.
Explain why objects moving in fluids must have special shapes.
Answer:
When objects move through fluids, they have to overcome friction acting on them. In this process, they lose energy. Efforts are made to minimize friction by giving special shapes to the moving objects.

Question 1.
In which direction the force of friction acts ?
Answer:
It acts in a direction opposite to the direction in which the force is applied.

Question 2.
It is difficult to move a cycle along a road with its brakes on. Why ?
Answer:
Sliding friction is more than rolling friction.

Question 3.
Why a rolling ball stops after some time ?
Answer:
Due to opposing force of air and friction between the ball and the ground.

Question 4.
What is friction ?
Answer:
Friction.
It is the resistance offered to the movement of one material object against another when the two are in contact with each other.

Question 5.
Why are tyres made circular ?
Answer:
Rolling friction is less than sliding friction.

Question 6.
Friction is a self-adjusting force. Is it correct ?
Answer:
Till the body moves, forces of friction adjusts itself in such a way that it is equal and opposite to the applied force.

Question 8.
What is a spring balance ?
Answer:
Spring balance. It is a device used to measure force dcting on an object.

Question 1.
Why a horse has to apply more force to start a tonga than to keep it moving ?
Answer:
In the first few steps the horse has to do work against the force of friction as well as has to give acceleration (has to increase kinetic energy) to the tonga. After when it begins to move it has to work only against friction.

Question 4.
Out of the given two situations, which one will be easy to push the object and why ?

Answer:
In situation 1 it is easy to push the object because rolling friction is less than sliding friction.

Question 1.
Define friction. What is the cause of friction ? Give factors affecting friction. Explain that friction is necessary evil.
Answer:
Friction.
It is the opposing force or retarding force; which is called into play when a body actually moves or tends to move over the surface of another body.

When an object is pushed with a small amount of force, it does not move at all. It means that the other surface on which object is lying exerts some force on the object which is in a direction opposite to our push. The opposing force is called friction.

Cause of friction.
Every surface, howsoever, consists of irregularities in the form of mounds and grooves. When one surface tends to move over the other surface, these irregularities get interlocked with one another and hence motion is opposed. This gives rise to frictional force. Thus, force of friction is due to roughness of the surface.

Advantages of friction.
Friction plays a very important role in our daily life.
1. We can walk, run, climb up the mountains and the trees only due to friction. Steps of the stairs are made rough to increase friction and hence avoid slipping.

2. The moving vehicles can only be stopped by applying brakes. Due to lack of friction, it is very difficult to drive a vehicle out of mud. Tyres of the vehicles have special projections and depressions, so as to avoid slipping.

3. Belts and pulleys are capable of driving machine only because of friction.

4. If friction were absent, a knot could not be tied; a nail could not be fixed in the wood, the buildings would have tumbled down, the eatables could not be held in fingers and not chewed by the teeth. The clothes could not be stitched and the writing with pen was not possible. 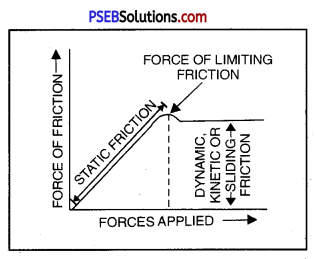