Question 1.
Indicate whether the following statements are True [T] or False [F].
(a) Unicellular organisms have one-celled body.
Answer:
True

(c) The basic living unit of an organism is an organ.
Answer:
False

Question 2.
Make a sketch of the human nerve cell. What function do nerve cells perform ?
Answer: Question 3.
Write short notes on the following :
(a) Cytoplasm
(b) Nucleus of a cell.
Answer:
(a) Cytoplasm.
It is a jelly-like fluid present inside the cell membrane. Various cell organelles are present in it. It contains water, sugar, minerals, lipids proteins etc.

(b) Nucleus.
As true nucleus is present in all the eukaryotic cells except mammalian RBCs, sieve tube cells, tracheids and vessels. It is formed of four components:
(i) Nuclear Membrane.
It is a two-layered envelope around the nuclear sap. It is porous (with nuclear pores) and semi-permeable membrane. Outer membrane is studded with ribosomes. It regulates exchange of materials between nucleoplasm and cytoplasm.

(ii) Nucleoplasm.
It is a semifluid colloidal substance in which nucleoli and chromatin fibres are present. It acts as nuclear skeleton and forms spindle for the cell division.

(iii) Nucleolus.
It is dense, spherical, naked and darkly stained structure and it is site of formation and store house of RNA.

(iv) Chromatin Fibres.
These are long, fine and darkly stained threads which collectively form nuclear reticulum. During prophase of mitosis and meiosis, these condense to form a specific number of rods, called chromosomes. These are embedded with genes which are chemically formed of DNA and act as units of heredity and variation. They also help in the synthesis of structural and enzymatic protein. 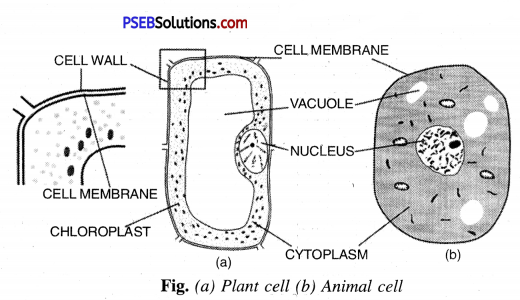 Question 6.
State the difference between eukaryotes and prokaryotes.
Answer:
Eukaryotes.
These are the organisms whose cells contain well defined nucleus with a clear nuclear membrane. Examples are onion cells, cheek cells.

Prokaryotes.
These are the organisms whose cells have no definite nucleus i.e. without nuclear membrane. Examples are bacteria, blue green algae.

Question 7.
Where are chromosomes found in a cell ? State their function.
Answer:
Chromosomes are found in nucleus of a cell. Chromosomes carry genes and help in inheritance or transfer of characters from the parents to the offspring.

Question 10.
Complete the crossword with the help of clues given below.
Across
1. This is necessary for photosynthesis.
3. Term for component present in the cytoplasm.
6. The living substance in the cell.
8. Units of inheritance present on the chromosomes.

Down
1. Green plastids.
2. Formed by collection of tissues.
4. It separates the contents of the cell from the surrounding medium.
5. Empty structure in the cytoplasm.
7. A group of cells. Question 1.
A slide is given in the figure below. What does this show ? Question 2.
What is the name of basic structural unit in living organism ?
(a) Tissue
(b) Organ of body
(c) Cell
(d) Molecule.
Answer:
(c) Cell.

Question 3.
Which out of the following cell-organ is found in plants only ?
(a) Mitochondria
(b) Chloroplast
(c) Cell membrane
(d) Nucleus
Answer:
(b) Chloroplast.

Question 11.
Which organ of the cell is found in plant cell only?
(a) Cell wall
(b) Chromosome
(e) Nucleus
(d) Cytoplasm
Answer:
(a) Cell wall.

Question 3.
What is structural and functional unit of life ?
Answer:
Cell.

Question 4.
What is the contribution of Robert Brown in cell biology ?
Answer:
He discovered nucleus in the cells of orchid.

Question 8.
Who called the protoplasm as the physical basis of life ?
Answer:
Huxley.

Question 9.
Give the contribution of Rudolf Virchow in the field of biology.
Answer:
He stated “omnis cellula e cellula” which means new cells are formed by the growth and division of pre-existing cells.

Question 10.
What are two types of cells on the basis of nature of nucleus ?
Answer:
Prokaryotic and Eukaryotic cells.

Question 11.
What is nucleoid ?
Answer:
Nucleoid. It is incipient nucleus of prokaryotes like bacteria and blue-green algal cells and is without nuclear membrane.

Question 12.
What is contribution of Robert Hooke in the field of cell biology ?
Answer:
Robert Hooke discovered the cell.

Question 13.
What are the three functional regions of a cell ?
Answer:
Plasma membrane, cytoplasm, nucleus.

Question 14.
Give the primary function of plasma membrane.
Answer:
It regulates exchange of material between cytoplasm and extra-celluar fluid.

Question 19.
What are organs ?
Answer:
Organs. Various body parts of animals and plants are called organs.

Question 21.
Why Robert Hooke coined the word cell ?
Answer:
Robert Hooke was excited when he observed spaces in a cork slice those appeared like honeycomb. He called these compartments as cells.

Question 24.
What is size of the smallest cell ?
Answer:
0.1 micron (μm) i.e. ten thousandth part of a millimetre.

Question 25.
What is yellow yolk in the egg of a hen ?
Answer:
It represents single cell.

Question 28.
What role does cell membrane play in a cell ?
Answer:
Cell membrane encloses a liquid substance known as protoplasm. It regulates the flow of substances both into the cell and out of it.

Question 30.
What is nucleoplasm ?
Answer:
Nucleoplasm. It is the liquid protoplasm in the nucleus.

Question 31.
Who controls the activities of a cell ?
Answer:
Nucleus.

Question 32.
What do chromosomes do ?
Answer:
Chromosomes help in inheritance or transfer of characters from the parents to next generation.

Question 33.
What are chloroplasts ?
Answer:
The green plastids in the plants are called chloroplasts.

Question 34.
What is the shape of mitochondria ?
Answer:
Rod-shaped or spherical.

Question 35.
Name the power house of a cell.
Answer:
Mitochondria.

Question 1.
What is a cell ?
Answer:
Cell.
Just as the bricks are the units of all types of houses, the cells are the units or building blocks of living organisms. Animals and plants like ant, housefly, dog, elephant, sunflower, neem etc. consist of cells.

Question 3.
What is the difference between the plasma membrane and cell wall ? Give the functions of each one.
Answer:

Question 4.
Which cell organelle is called “suicidal bag” and why ?
Answer:
Lysosome is commonly called suicidal bag of cell. It is so as it contains hydrolytic enzymes which help in digestion of foreign food or bacteria (by heterophagy) ; or reserve food or certain cell organelles (by autophagy) ; or the whole cell after the cell death (by autolysis).

Question 5.
Which cell organelle is called “power house” of the cell ? Write about its function briefly.
Answer:
Mitochondrion is commonly called “power house” of the cell because it is site of oxidative breakdown of glucose in aerobic cell respiration to produce energy- rich ATP molecules. One mole of glucose, in aerobic respiration, produces 36 ATP molecules.

Question 6.
Define the following terms :
(a) Protoplasm
(b) Cytoplasm
(c) Nucleoplasm.
Answer:
(a) Protoplasm is the physical basis of life and lies inside the cell membrane. It includes both cytoplasm and nucleoplasm.

(b) Cytoplasm lies between the cell membrane and nucleus. It contains various types of cell-organelles and cell-inclusions. It undergoes cyclosis. It is the site of protein synthesis, glycolysis, etc.

(c) Nucleoplasm lies inside the nucleus and contains only nucleoli and chromatin fibres. It does not undergo cyclosis. It forms spindle during cell division. Multicellular Organisms. The organisms whose body is made of many cells is called a multicellular organisms, e.g. Man, Hydra, Dog, Elephant etc.

Question 11.
Draw the diagrams of different kinds of cells.
Answer: Question 12.
How was the first cell discovered?
Answer: Robert Hooke in 1665 observed slices of cork under a simple magnifying device. Cork is part of the bark of a tree. He took thin slices of cork and observed them under his microscope. He noticed partitioned boxes or compartments in the cork slice. These boxes appeared like a honey comb.

He also noticed that one box was separated from the other by a wall or partition. Hooke coined the term ‘cell’ for each box. Cell in Latin means ‘hollow space.’

Question 13.
Discuss about the various shapes of cells.
Answer:

Generally cells are round, spherical or elongated. Some cells are long and pointed at both ends. They exhibit spindle shape. Cells sometimes are quite long and thread like. Some are branched like the nerve cell or neuron.

Question 1.
Describe the structure of a typical cell in detail.
Answer:
Structure of cell
A cell is the basic unit of life. It is capable of performing all functions of life and to fulfil all the functions, cell is made up of different parts. Basically, a cell is formed of three parts:
1. Cell membrane or plasma membrane
2. Nucleus.
3. Cytoplasm.

The cytoplasm is surrounded by cell membrane and nucleus constitutes the protoplasm of a cell. The typical structure of plant and animal cells are shown ahead:

1. Cell Membrane.
It is a delicate, thin membrane. It is also called plasma membrane. It forms the outermost layer in animals but in plant cells an additional membrane is present. It is called cell membrane in animal’s cell and cell wall in plant’s cell. Cell membrane has following functions:
(i) It provides shape to the cell.
(ii) It allows the flow of some substances into the cell and out of the cell.
(iii) It acts as a barrier to protect internal parts. 2. Nucleus.
The oval or spherical structure, which is the controlling centre of all activities of the cell is called nucleus. Nucleus is made up of following parts:
(i) Nuclear Membrane. It is the membrane having pores which separates contents of nucleus from cytoplasm.
(ii) Nucleoplasm. The fluid present in nucleus is called nucleoplasm.
(iii) Nucleolus. Small spherical body made up of nucleoprotein. RNA is also present in nucleus.
(iv) Chromatin Material. Several thread like structures forming a network are present in nucleoplasm. Chromatin material is in the form of chromosomes which carries genes on it.

The nucleus has following functions:
Chromatin material of nucleus transmits characters from one generation to other.
It contains informations for carrying out all basic functions.

3. Cytoplasm.
The jelly like fluid inside the membrane of cell is cytoplasm. All tiny structures performing different functions, are present in it. These are called organelles.

It also contains water, sugar, minerals, lipids, proteins etc. The various cell organelles present in cytoplasm are:
(i) Mitochondria. They are commonly called Tower house of the cell’ because they help in release of energy from food. They also store energy. Mitochondria (singular mitochondrion) are oval or rod shaped organelle bounded by two membranes.

(ii) Endoplasmic Reticulum. A complex network of membranes which are present either attached to nucleus or free from it are endoplasmic reticulum. Its network extends from nuclear membrane to cell membrane. It helps in protein synthesis and also in transport of various substances.

(iii) Plastids. These organelles are present only in plant cells. These are of three types:
(а) Chloroplasts. Green coloured plastids are chloroplasts. The green colour is due to the presence of pigment chlorophyll. They are commonly known as ‘Kitchen of the’ cell’ because chloroplasts are the site of photosynthesis i.e. process of making food.

(b) Leucoplasts. Colourless plastids are called leucoplasts. These are present in the roots and underground modified stems.

(c) Chromoplasts. These are coloured plastids. These are present mainly in flowers, petals and fruits.

(iv) Golgi Bodies. These are membrane bound, pile of many flattened sacs. In plants, golgi bodies are known as dictyosomes. They are mainly secretory in function.

(v) Vacuoles. The fluid filled organelles present in a cell are vacuoles. In plant cell, vacuoles are few in number and larger in size whereas in animals, they are more in number and smaller in size. They maintain turgidity of plants cells. Vacuoles also serve as a waste deposit bin in which unwanted materials may be diverted.

(vi) Lysosomes. Small spherical bodies having single membrane are lysosomes. They sacrifice their ownselves to destroy and digest various materials. They are also called ‘suicidal bags’. Plant cells do not have lysosomes.

(vii) Ribosomes. These are small rounded bodies which are present free or attached with endoplasmic reticulum. They perform the function of protein synthesis.

(viii) Centrosome. It is a rod like structure. It occurs close to the nucleus and help in cell-division.