Question 1.
An athelete completes one round of circular track of diameter 200 m in 40 s. What will be the distance covered and the displacement at the end of 2 min 20 s?
Solution: 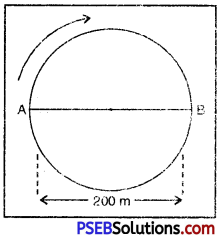 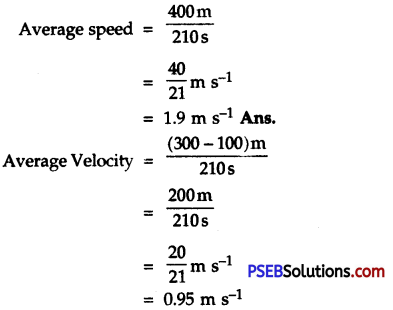 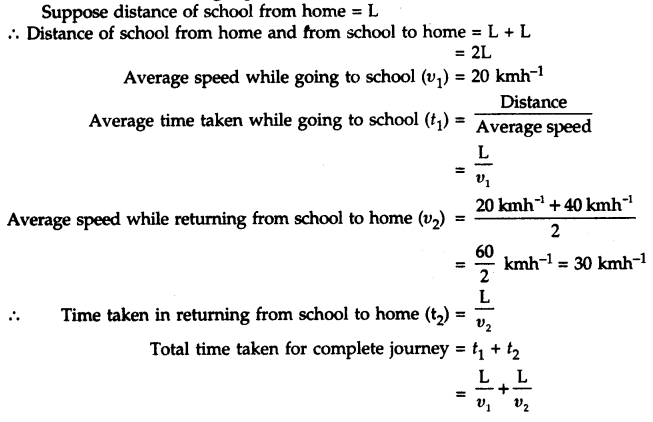 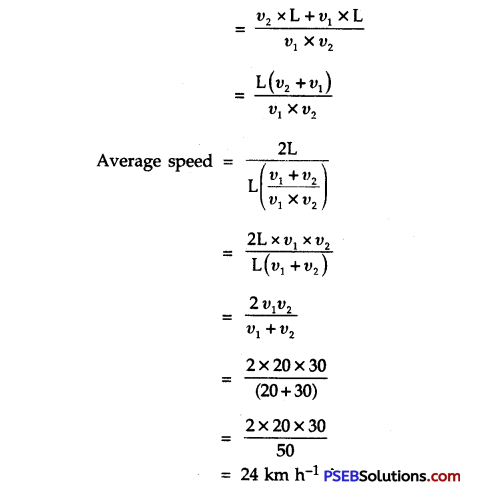 Question 5.
A driver of a car travelling at 52 kmh-1 applies the brakes and accelerates uniformly in opposite direction. The car stops in 5 s. Another driver going at 3 km h-1 applies his brakes slowly and stops in 10 s. On the same graph paper plot the speed versus time graph for the two cars. Which of the two cars travelled farther after the brakes were applied?
Solution:
In the figure AB and CD represent velocity-time graphs of two cars which have their speeds 52 kmh-1 and 30 kmh-1 respectively. 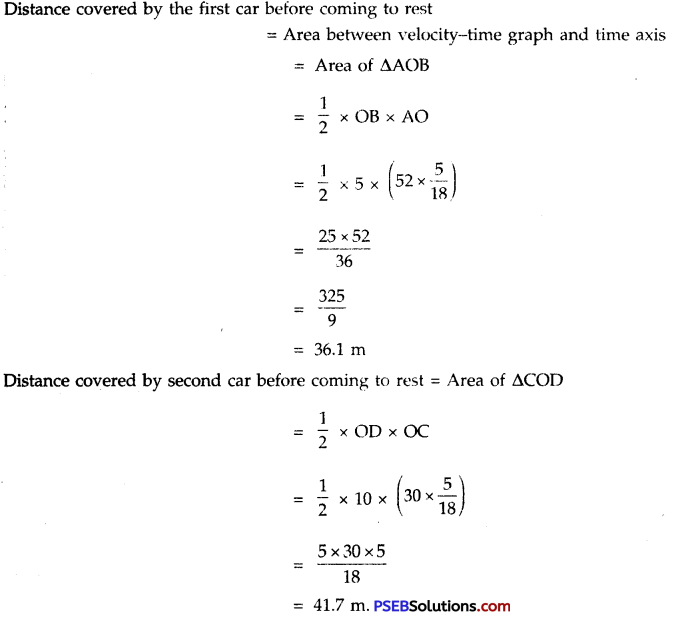 In this way, after applying brakes the second car would cover more distance than the first car.

Question 6.
Fig shows the distance-time graphs of three objects A, B and C. Study the graph and answer the following questions: 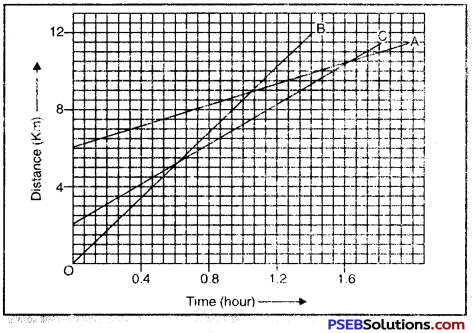 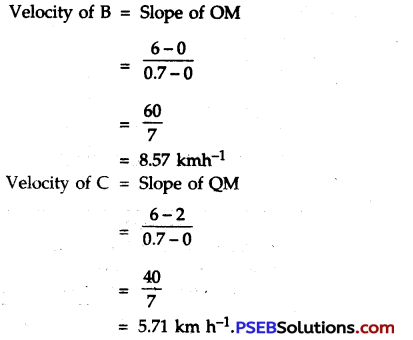 Because slope of object B is maximum of all therefore, it is moving fastest.
(b) Since all the three graphs do not intersect at any point therefore, all the three do not meet ever at the same point on the road.
(c) When the object B passes A at point E (at 1.4 hr) then at that time the object C will be at F i.e. 9.3 km away from the origin O.
(d) B passes C at G after covering 8 km.

Question 8.
Speed-time graph for a car is shown in the fig. (a) Find how far the car travelled in first 4 s. Shade the area on the graph that represents the distance travelled by car during this period.
(b) Which part of the graph represents uniform motion of the car?
Solution: (b) After 6 s the car has uniform motion.

Question 9.
State which of the following situations are possible and give an example for each of these.
(a) an object with a constant acceleration but with zero velocity.
(b) an object moving in a certain direction with an acceleration in the perpendicular direction.
Answer:
(a) Yes, this situation is possible.
Example: When an object is projected upwards, its velocity at the maximum height is zero although acceleration on it is 9.8 ms-2 i.e. equal to g.

(b) Yes, at the maximum height of projection the velocity is in the horizontal direction and its acceleration is perpendicular to the direction of motion as shown in figure. 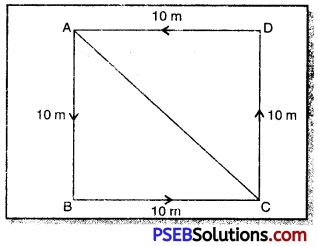 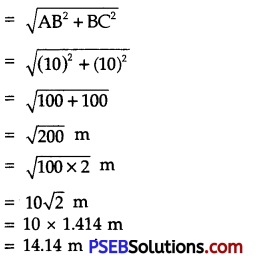 Question 4.
Distinguish between speed and velocity.
Answer:
Distinction between Speed and Velocity: 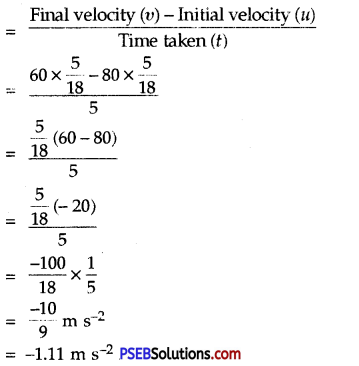 Question 11.
A train starting from a railway station and moving with uniform acceleration attains a speed 40 km h-1 in 10 minutes. Find its acceleration.
Solution: 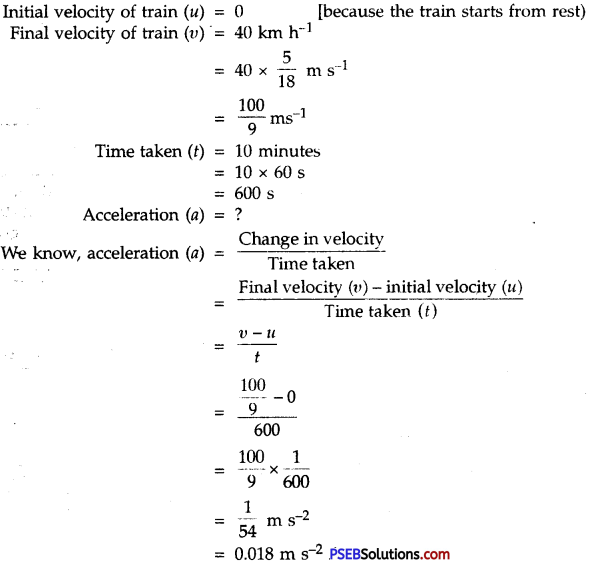 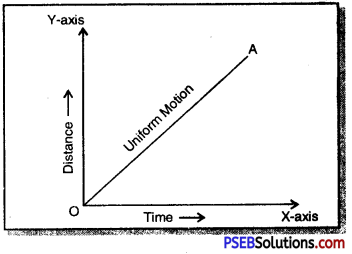 Distance – time (x – t) graph for non-uniform motion may be a curved graph of any shape because a body travels unequal distances in equal intervals of time. 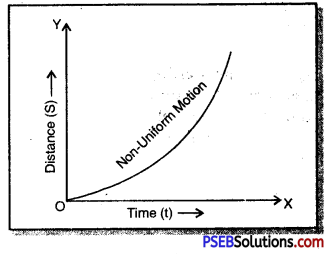 Question 13.
What can you say about the motion of object whose distance – time graph is a straight line parallel to time axis?
Answer: 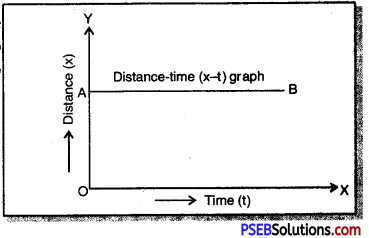 The object whose distance-time (x – t) graph is a straight line parallel to the time axis will be at rest with respect to the surroundings.

Question 14.
What can you say about the motion of an object if its speed-time graph is a straight line parallel to time axis?
Answer: 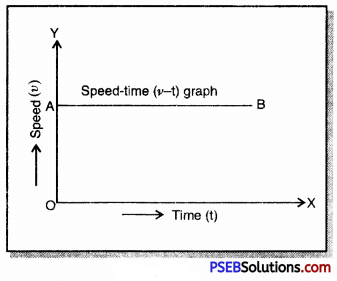 The object whose speed – time (u – t) graph is a straight line parallel to time axis shows that it is in motion with uniform speed.

Question 15.
What is the quantity which is measured by the area occupied below velocity-time graph?
Answer: 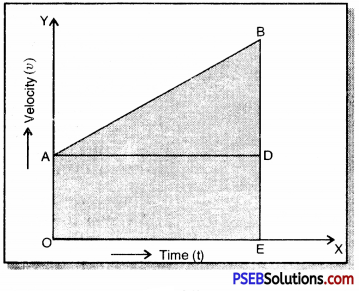 The area occupied below velocity-time graph measures displacement of the body.