This PSEB 6th Class Computer Notes Chapter 8 Output Devices will help you in revision during exams.

Types of Output Devices
There are many types of output devices available these days. Output devices can be categorized into following categories:

Monitor is also called visual display terminal. It is used to get soft copy of the output. It is most common output device. It looks like a television screen.

There are different kinds of monitors available these days.

1. Cathode ray tube monitor: These monitors were used in earlier days. These monitors use cathode ray technology to display the information. They look like bulky television sets. The size of these monitors is measured by the diagonal length on the screen. Monitors are available in 15, 17, 19 and 21 inches screens. Initially they were black and white but now colored monitors are also available. 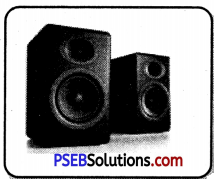 Headphones are similar to the headphones which we use on our mobile phones. They are also available in a variety of models. 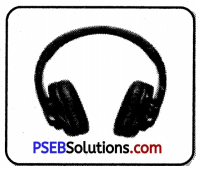 Printer:
Printer is an output device which gives a hard copy of the output. The output given by the printer is permanent in nature.

This output can be preserved in the form of paper. There are a lot of printers available in the market. Printer can be colored as well as black and white.

Printer can be divided into three main categories: 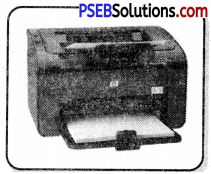 Plotter
Plotters also give hard copies of output. These are similar to the printer but plotters are used to print on big sized paper or canvas. Plotters are used in computer aided designs. These are used for some specific areas of application such as engineering design graphical design etc. Plotters use pens for drawing pictures in the media. The most common use of plotter is the big banners which we see in the market. These banners are printed with the help of plotters. Plotter can print black and white as well as color. Plotters are very costly devices. They cannot be awarded by single person.

These are of following types:

1. Drum Plotter: In drum plotter, a drum is used to rotate in vertical motion. It contains one or more Horizontal pen holders. These pens are used to draw lines on the paper. Drum and pen draw the design by working together simultaneously. Each pen is program selectable. Pens use different colours to draw.

2. Flatbed Plotter: It draws on flat paper. This paper is spread on flat bet table. Paper is not rotated. The pen moves as per the drawing. It contains many pen holdings of different colours. The plot area is as per bed area. It can range from A4 to 50 feet or more.

3. Inkjet Plotter: These plotters uses inkjet technology instead of pens. They can draw in colour. These plotters are usually faster than other types of plotters. Projector
Projector is an output device which is used to get visual output. They can be connected to computers.
The projector gives the output big in size. The projectors are mainly used to display something to a large number of people. They are used in office meetings or in classroom teaching by the teachers.