Question 2.
What are phanerogams? Write characters of gymnosperms and angiosperms.
Answer:
Phanerogamae. These are seed-bearing plants. Vascular tissue is present. They are found on land. This division is composed of two main sub-divisions i.e. Gymnosperms and Angiosperms. 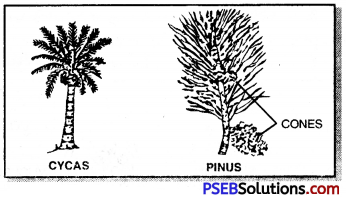 Question 4.
Write characters of phylum protozoa and phylum porifera.
Answer:
Characters of Phylum Protozoa:
1. Very minute, one-celled microscopic organisms. Cell itself is an organism therefore, they are also called acellular organisms.
2. Structure is very simple. The body consists merely of a mass of protoplasm. There is no tissue or organ formation.
3. Generally, there is no skeleton. However, locomotory and feeding organelles such as pseudopodia, flagella or cilia may be present.
Example. Amoeba, Entamoeba, Paramecium, Trypanosoma.

Characters of Phylum Porifera:
1. They are primitive, sessile animals with specialized cells but no tissues or organs.
2. Pores ali over the body, no digestive tract.
3. Collar cells filter out food particles from water current flowing through canal system.
4. Mostly marine.
5. They are called sponges.
Examples: Euplectella, Sycon, Spongilla.

Question 1.
Briefly describe diversity of life.
Answer:
Diversity of life (also called biological diversity or biodiversity) is the variety of living systems. It may refer to extinct organisms, but also to their diversity in the past. It usually covers multiple levels of biological diversity. About 2 million species have been described upto date. About 17000 – 19000 new species are added every year to the list. Exact number of species present on earth is unknown, current estimates favouring figures in the range of 8-12 million.

Question 4.
Why are local names not sufficient to recognize the organisms? What are the advantages of keeping scientific names?
Answer:
Local names are not understood elsewhere. The common name of a species often varies with language and region of world. In Biology, we deal with a very large number of species. It would not be possible to refer to them unless each one of them had a separate name for itself.
Advantages of scientific names:

Question 8.
What are the basis of Whittaker’s system of classification?
Answer:
Whittaker based his classification on the following three criteria: Question 12.
What kinds of organisms are grouped under Protista?
Answer:
Characters of Kingdom Protista:

Question 13.
Write the general characters of kingdom Fungi.
Answer:
Tire kingdom of multicellular decomposers is Fungi. This kingdom includes diverse kinds of eukaryotic, predominantly multicellular, heterotrophic organisms.
Characters of Kingdom Fungi:
1. Body organization mycelial or secondarily unicellular, composed of hyphae, coenocytic or septate.
2. They are non-green as chlorophyll is absent.
3. They are heterotrophic in nutrition and obtain food from dead and decaying organic matter by absorption.

Question 16.
What is binomial nomenclature? Illustrate with an example.
Answer:
In binomial nomenclature, name of every organism is composed of two components-first one is genus (generic) and second species name (specific).
Example: Scientific name of human is Homo sapiens where Homo is generic name and sapiens is specific name.

Question 17.
Give some examples of binomial nomenclature.
Answer:

Question 18.
Write some advantages of binomial nomenclature.
Answer:
(a) The biological names are same all over the world.
(b) They are uniformly binomial.
(c) They are definite and accepted universally.
(d) They are descriptive.
(e) They indicate general relationship.
(f) All newly discovered plants and animals can be named and described easily.

Question 19.
Write distinguishing features of division Thallophyta.
Answer:
Characters of Division Thallophyta:
(a) Plants belonging to this group are the simplest and primitive.
(b) The plants are made up of single cell or group of cells.
(c) The plant body is thallus i.e. it is not differentiated into stem, root and leaves. id) The reproductive organs are unicellular and thus unjacketed.
(e) The zygote formed after fertilization, gives rise to either plant body directly or produces spores.
(f) Vascular tissue absent.

Question 20.
Write three characters of Algae. Give examples.
Answer:
Characters of Algae
(a) Green in colour due to chlorophyll.
(b) They are photoautotrophs.
(c) Reserve food material is starch.
Example: Chlamydomonas, Volvox, Ulothrix, Spirogyra.

Question 22.
What are lichens?
Answer:
Lichens: They are organisms formed of intimate combination of an alga and fungus found in all types of habitat. It is an example of mutualism. Mycobiont is the fungal component and phycobiont an algal partner.
Example: Graphis, Parmelia and Usnea.

Question 26.
What are the two main divisions of angiosperms on the basis of number of cotyledons.
Answer:
Classification according to cotyledons
The number of cotyledons in seed of a flowering plant is either one or two. The angiosperms are divided into two groups-1. Monocotyledons and 2. Dicotyledons.
1. Monocotyledons are the plants in which the seed contains a single cotyledon; e.g. Wheat, Rice, Maize, Sugarcane, Grasses. There are about 50,000 species of them.
2. Dicotyledons are those flowering plants in which the seed contains two cotyledons.
e.g. Solarium sp, Mango, Beans, Castor, Gram, Sunflower. 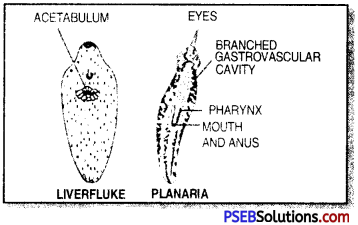 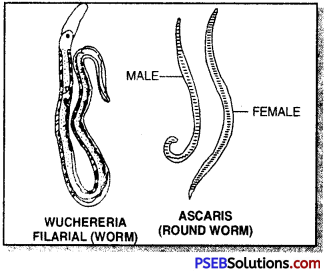 Question 34.
List three important distinguishing characters of phylum Arthropoda.
Answer:
Distinguishing Characters of Phylum Arthropoda
1. Body covered with chitinous exoskeleton.
2. Body bears jointed appendages.
3. One or two pairs of jointed antennae present.
4. There is an open circulatory system, and so the blood does not flow in well defined blood vessels.

5. A rasping organ, the radula in the buccal cavity.
Examples: Pila, Sepia, Octopus. 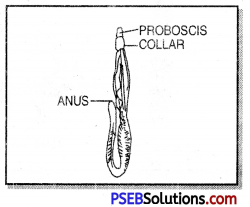 Question 39.
Give the general characteristics of the vertebrates.
Answer:
General Characters of Vertebrates:

Question 48.
Name at least five invertebrates belonging to different groups which are of economic importance.
Answer: 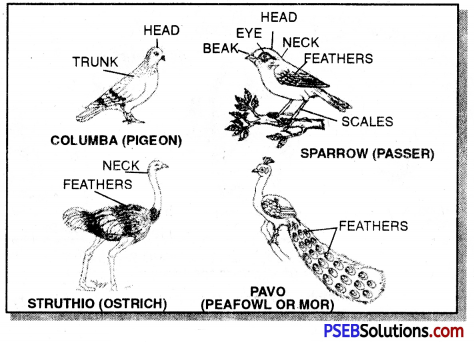 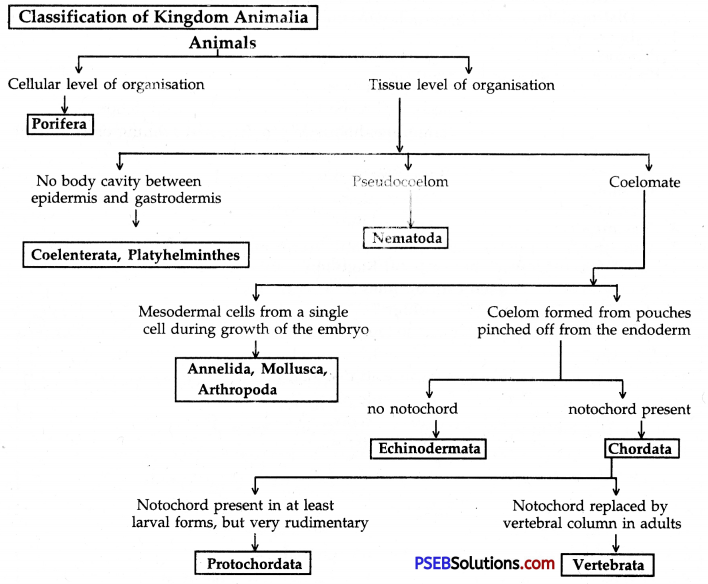 Question 1.
What is Classification?
Answer:
The method of placing organisms into groups and such groups depending upon similarities and differences.

Question 2.
Who is the father of taxonomy?
Answer:
Carl Linnaeus.

Question 3.
Define species.
Answer:
Species. It is defined as a dynamic group of organisms, which:
1.  resemble each other in all essential respects, i.e. structure and function.
2. interbreed freely under natural conditions to produce fertile young ones of their own kind.

Question 7.
Why are algae green in colour?
Answer:
Green colour of algae is due to the presence of chlorophyll pigment in their cells.

Question 11.
How many chambers are present in the heart of fishes?
Answer:
Two chambers.

Question 15.
Give one example of cartilaginous fish.
Answer:
Scoliodon.

Question 18.
Give the habitat of Ascaris.
Answer:
An endoparasite of intestine of man, especially children.

Question 20.
What are the different forms with respect to size in which life occurs on earth?
Answer:
Microscopic bacteria a few micrometres in size, the ~30 metre long blue whale and -100 metre tall redwood trees of California.

Question 22.
Which division of biology helps us in exploring the diversity of life forms?
Answer:
Taxonomy.

Question 23.
Who made the first attempt to classify animals?
Answer:
Aristotle.

Question 26.
What do you mean by characteristics?
Answer:
Characteristic is a particular form or function of a living organism.

Question 27.
What is a prokaryotic cell?
Answer:
Prokaryotic cell. A cell without clearly demarcated nucleus and membrane-bound organelles.

Question 29.
What is evolution?
Answer:
Descent with modification.

Question 31.
What are primitive animals?
Answer:
The group of animals which have ancient body divisions and have not changed very much. They are also called lower organisms.

Question 34.
What are basis of five kingdom classification as proposed by Whittaker?
Answer:
1. Nature of cells
2. Number of cells
3. Mode of nutrition

Question 39.
What is the nature of cells of monerans?
Answer:
Prokaryotic cell.

Question 40.
Name the kind of mode of nutrition in kingdom Monera,
Answer:
Autotrophic and Saprotrophic.

Question 45.
What is the mode of nutrition of Fungi?
Answer:
Fungi obtain their food from dead decaying organic matter.

Question 46.
What is symbiosis?
Answer:
An inter-relationship between two different species e.g. Lichens.

Question 48.
What is thallus-like plant body?
Answer:
When there is no differentiation of the plant body into root, stem and leaves.

Question 50.
Name the division which is called ‘amphibians of plant kingdom’.
Answer:
Bryophyta.

Question 51.
What is hypha?
Answer:
In fungi, thallus is made up of colourless filamentous structure called hypha.

Question 52.
What is the mode of nutrition in Fungi?
Answer:
Absorptive-saprophytic, Heterotrophic.

Question 53.
Name the group in which seeds are naked.
Answer:
Gymnosperms.

Question 54.
Name the group in which reproductive organs are flowers.
Answer:
Angiosperms.

Question 55.
Name the class of angiosperms in which reticulate venation is present.
Answer:
Dicots.

Question 59.
What are phanerogams?
Answer:
Phanerogams are seed bearing plants.

Question 60.
What are Algae?
Answer:
These are green, autotrophic thallophytes.

Question 63.
What are hermaphrodite animals?
Answer:
Animals which have both male and female reproductive organs e.g. earthworm, leech, etc.

Question 64.
Name the skeletal elements of sponges.
Answer:
Spicules (needles) or spongin fibres or both.

Question 65.
What are cnidoblasts? Give their function.
Answer:
These are stinging cells present on the tentacles of coelenterates like Hydra. These inject the hypnotoxin and paralyze the prey.

Question 66.
Name the cavity present in the body of Coelenterates.
Answer:
Coelenteron.

Question 68.
Which characters appeared for the first time in the flatworms?
Answer:
Triploblastic, bilateral symmetry and organ-system organisation.

Question 74.
What is primary unit of classification?
Answer:
Species.

Question 76.
What is a genus?
Answer:
Group of related species.

Question 77.
Why do species included in a genus resemble in many features?
Answer:
Because they have originated from a common ancestor.