I. Answer the following questions in 1-15 words:

Question 1.
What is meant by the disasters?
Answer:
Any natural or man-made happening that causes loss of life and property in a region is called a disaster.

Question 4.
What is an earthquake? How is it measured?
Answer:
The sudden shaking of part of the earth is called an earthquake. Its intensity is measured on Richter Scale. This instrument is called Seismograph.

Question 5.
What is a volcano? Write its types.
Answer:
The interior of earth consists of hot magma. It comes out of the earth through openings. It is called a volcano. It has three types:

Question 6.
How does the Tsunamis originate?
Answer:
Tsunamis are high tidal waves. These are caused due to sub-marine earthquakes. These are very destructive.

Question 7.
What are the main causes of floods?
Answer:

Question 8.
What is a cyclone? By what other names is it called?
Answer:
Cyclones are violent wind system with a wind velocity of more than 63 km per hour. These are called hurricanes in North America, Typhoons in S.E. Asia and Depressions in India.

Question 9.
What can be the cause of Landslides?
Answer:
Landslides are caused due to :

Question 10.
What do you mean by human disasters?
Answer:
Human disasters are related with human activities. Bomb-blasts and Terrorism are its examples.

Question 11.
What do you understand from the term ‘epidemic’?
Answer:
When a disease breaks out on a large scale and attacks people, it is called an epidemic. Dysentery, Dengu, Yellow fever, Cholera are called epidemics. Question 3.
Which precautions should be taken into consideration at the time of the earthquake?
Answer:
The suitable measures to be taken to protect oneself from the damage caused by earthquakes are :

Question 4.
What protective measures should be taken to save ourselves from Volcanoes and Tsunamis?
Answer:
Safety from Volcanoes:

Question 5.
Which (steps) should be taken for protection from droughts?
Answer:

Question 6.
Which measures can save us from disasters like epidemics?
Answer:

Question 1.
Which protective measures should we adopt to save ourselves from disasters like floods and cyclones? Write in detail.
Answer:
Floods:

Question 2.
What are human disasters? Explain the disaster management of any two human disasters in detail.
Answer:
Human disasters are related to human activities and industries—man causes these unintentionally. Bomb explosion, terrorist attacks and dam burst are examples.
1. Bomb explosion and Terrorist attack. Bombs are made to be used during war. But some people cause confusion and fear among people by bomb explosion. Many innocent people die and mostly hurt. These hinder the development of a country. On 11 September, 2001 Bomb attacks were made in New York on World Trade Tower buildings.

Precautions during a Bomb Scare

2. Dam Burst: Dams are used to store water. When a dam bursts, serious damage is done. In case of a big dam, it becomes a disaster. Life is disrupted. Cattle and crops are swept away. Flood control measures be used. Special precautions be used to save life and property.

Question 1.
Prepare a report of 3-4 pages on natural disaster faced by India in Uttarakhand in June 2013.
Answer:
The recent flash floods in Uttarakhand have caused huge damages.

Torrential Rainfall. The torrential rainfall in the Uttarakhand Himalayas of June, 2013 resulted into huge death and destruction. It left hundreds dead; thousand marooned and washed away scores of villages, inundated the eight century Kedarnath temple. The famous Manikarinika tfemple on the banks of Bhagirathi was swept away by swirling waters of the river. Houses and small apartment blocks on the banks of Bhagirathi, Alaknanda and Mandakini have been toppled into the rushing, swollen waters and been swept away along with cars and trucks.

The extent of damage due to flash floods in many parts of the seven districts of Uttarakhand is mind-numbing. Single-story houses simply disappeared, many double-storey houses crumbled due to the weakening of its foundation. The disaster stuck when the Chardham Yatra was going on with congregation of around 75,000 pilgrims from all over the country. The Central Government, along with Indian Army, Indian Air Force (IAF), Indo-Tibetan Border Police (ITBP) and Border Road Organisation (BRO) rescued around 33,000 stranded pilgrims, The flooding was so fierce and disastrous that people named it Himalayan Tsunami.

A Man-Made Disaster. Many environmentalists termed this event as a man-made disaster. According to them human action leading to environmental altercations aggravated the problem and reduced the natural defense system. In the last three decades the region has witnessed demographic changes, deforestation, rapid urbanisation and expansion of roads. The environmentalists emphasised that mountains have a certain carrying capacity that should never be exceeded at any cost. Uttarakhand and Himachal Pradesh are the two Himalayan states that were worst hit by monsoonal flash floods in June 2013. Man-made factors compounded the scale of the disaster.

Unabated expansion of hydroelectricity power projects and construction of roads to accommodate ever increasing tourism, specially religious tourism, are the main reasons of unprecedented devastation. Mindless illegal construction of resorts, guest house, roads has taken place in this ecoSgically fragile region to accommodate tourists. Buildings have been constructed over flood ways, old drains and streams blocking the natural pathway of the water. On June 15-16, 2013, the Alaknanda River and its tributary Mandakini occupied their flood ways and started flowing along the old courses where human habitation has come up with the passage of time.

The Mandakini changed its course to the west. The sediment-loaded river washed away shops, guest houses/lodges etc., killing people who were present at the time.

Kedarnath Dham, a place of serenity and devotion, which was dotted by only few huts in 1882 was mushroomed by haphazard illegal constructions of buildings, shops, hotels/ lodges etc,, blocking the natural flow of the Alaknanda river.

Ganga and its tributaries like Alaknanda, Mandakini, Bhagirathi, Kali Ganga, Gauri Ganga, were swept away or excessively damaged due to flash floods.

The June, 2013 Uttarakhand disaster, also known as Himalayan Tsunami was actually triggered by very heavy rainfall during June 16-18 and unusual behaviour of monsoon this year in India.

Rescue Work:
It was the army personnel who worked tirelessly and put their lives in danger to help and rescue stranded lbcals and pilgrims affected by flash floods. They provided people essential materials such as food, blankets and medicines. The Indian Air Force (IAF) put to use some of the best military skills to help people in flood ravaged zones of Uttarakhand and rescued hundreds of fatigued and exhausted, stranded pilgrims and locals. Operation ‘Rahat’ was the biggest ever helicopter based rescue operation in history. 45 choppers made sorties day in and day out despite bad weather and hazardous conditions. It mobilized the resources, evacuated people to relief and base camps and carried out extensive search and rescue operations creating a world record. The unusual advance of summer monsoon, combined with cloudbursts (still not confirmed) and geophysical dynamics (loose soil, landslides and lake bursts) had channeled huge devastation through massive flash flooding in Uttarakhand, which turned into a major disaster due to the combined impact of anthropogenic activities and breaching of the carrying capacity due to irresponsible tourism.

Question 1.
Which one of the following is not a zone of high earthquake intensity?
(a) N.E. India
(b) Gujarat
(c) the Himalayas
(d) Haryana
Answer:
(d) Haryana.

Question 6.
Look at the following picture and write the name of the disaster shown in the picture. 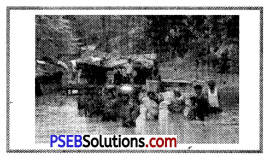 Question 7.
You are having a class test. Suddenly the fans and the doors of the room start shaking. Tell What type of natural disaster is it?
(a) Droughts
(b) Earthquake
(c) Floods
(d) None of these
Answer:

Fill in the Blanks:

Question 4.
Volcano is a _________ in the earth’s crust through which molten rocks out to the surface of the earth.
Answer:
vent

Question 3.
Hits and houses should not be built near coastal areas.
Answer:
True.

Question 5.
Alaknanda and Mandakani are two river which are overflowed.
Answer:
True.

Question 1.
What are the ill-effects of a disaster?
Answer:
Loss of life, property and cause damage to a large number of people.

Question 3.
On which two buildings was a major Terrorist attack made in U.SA?
Answer:
On 11 Sept., 2001 in New York-Tower buildings and Pentagon.

Question 4.
Define Focus and Epicentre.
Answer:
Focus is the origin of Earthquake waves, Epicentre is the place on the surface of the earth directly above focus.

Question 5.
What damage is done due to earthquake?
Answer:

Question 7.
What is a flood?
Answer:
When the river water spreads beyond its bank it is called a flood.

Question 8.
What are cyclones and tropical cyclones? How are these caused?
Answer:
Cyclones are whirlwind of high speed winds. Their velocity is more than 63 km per hour. These are caused due to pressure. These mostly occur between 5°-206 latitudes

Question 9.
What is a drought?
Answer:

Question 10.
Which temple was affected by the Uttarakhand disaster?
Answer:
Kedamath temple.

Question 13.
According to the device that measures the intensity of earthquake, 12 means complete destruction. What is this device called?
Answer:
Richter Scale.

3. Extinct volcanoes. The volcanoes which have never erupted in human history are called extinct or dead volcanoes, such as Kilimanjaro in Africa.

Question 3.
How do cyclones become a disaster? Describe the damage done by these.
Answer:
In a cyclone, when winds move with a velocity of 100 kms per hour it becomes a disaster. These damage the adjoining areas.

Question 4.
Describe the disaster and precautions for Dam Burst.
Answer:
Dams are used for reservoirs to store more water. Dam burst causes floods. When there is a big dam, it is a disaster. Whole life is disrupted. Govt, should take measures to save life and property.

Question 5.
What do you know about disaster caused by Industrial accidents?
Answer:
Industries have big machines and plants. Many gases are used in these. Sometimes accidents occur due to leakage of gases like Bhopal Gas Tragedy. There ill-effects are :

Question 6.
What measures are taken for safety during industrial accidents?
Answer:
The following precautions should be taken against fire:

Question 1.
Describe the disasters caused due to landslides and avalanches. Suggest measures to reduce the risk.
Answer:
Landslides. Groundwater increases the weight of the rock or the soil which contains it. Sometimes a mass of earth saturated with water slides down a hill slope causing landslides.

Causes: One or more causes such as lubrication by rains or melting snow, steep slopes and unusual structures, earthquakes, removal of support, or gravity may produce landslides. Lubrication of rocks takes place by means of rains or melting snows as in many parts of the Himalayas. Rocks become slippery and slide down. Steep slopes may be caused by the sliding of rocks straight through faulting or by quarries made by man. The sides of these may collapse on accounts of other factors.

Effects of landslides. Landslides and rock slides are of frequent occurrence in many mountains. National highways are closed. Cattle and vehicles suffer a lot.

Measures to reduce the risk during the landslides :

Avalanches: The. sliding of ice along the slope leads to avalanches downwards. These cause a lot of damage to roads, cattle, human beings, buildings, etc. When the pressure of ice increases, it slides down the slopes.