Question 1.
Explain the importance of reproduction in organisms.
Answer:
Importance of Reproduction.
It is the ability of living organism to produce the youngones of its own kind. Reproduction helps to increase the population of species. It is an important biological process for existence and continuity of a species. It also involves the transmission of genetic material from parents to offsprings.

Question 2.
Describe the process of fertilization in human beings.
Answer:
Fertilization.
The testes produce the male gametes called sperms. Millions of sperms are produced by the testes. Though sperms are very small in size, each has a head, a middle piece and a tail. 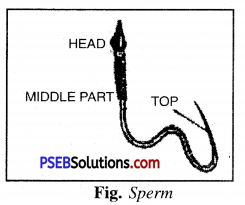 The first step in the process of reproduction is the fusion of a sperm and an ovum or an egg. Millions of sperms from the male are transferred into female body. The sperms swim in the oviduct with the help of their tails to reach egg. When they come in contact with the egg,- one of the sperms may fuse with the egg. Such fusion of the egg and the sperm is called fertilization. During fertilization, the nuclei of the sperm and the egg fuse to form a single nucleus which result in the formation of a fertilized egg called zygote. Zygote is the beginning of a new individual. 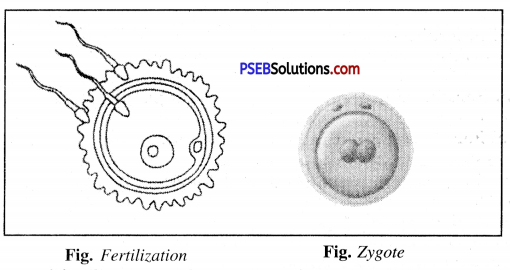 Question 4.
Indicate whether the following statements are True [T] or False [F]:
(a) Oviparous animals give birth to young ones.
Answer:
False

(b) Each sperm is a single cell.
Answer:
True

(e) Egg laid after fertilization is made up of a single cell.
Answer:
True

(i) A zygote is formed as a result of fertilization.
Answer:
True

(j) An embryo is made up of a single cell.
Answer:
False

Methods of asexual reproduction in animals
1. Binary Fission.
Binary fission involves an equal or nearly equal longitudinal or transverse splitting of the body of the parents into two parts each of which grows to parental size and form. This method of reproduction occurs regularly among protozoa (Amoeba, Paramecium etc.) in which it is essentially the process of cell division which results in the complete separation of the daughter cells. It has also been observed among multicellular animals as an sea anemones in the form of longitudinal fission or as transverse fission among planarians.

2. Budding.
Budding is a form of asexual reproduction in which new individual arises from a relatively small mass of cells that initially forms a bud on the parental body. The bud may assume parental form either before separation from the body of the parent as in external budding or after separation as in internal budding. External budding is common among sponges, coelenterates (e.g. Hydra), flatworms and tunicates. But in some coelenterate as in Obelia, it gives rise to medusae rather than to the parental. Question 8.
What is metamorphosis ? Give examples.
Answer:
Metamorphosis. The drastic changes that take place during the development of an animal is called metamorphosis. 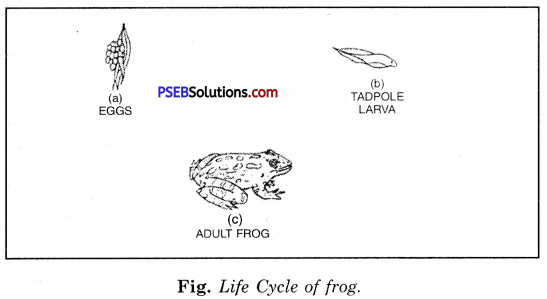 In the above figure, we see the different stages of development of frog. We find three distinct stages –
(i) Egg (ii) tadpole larva (iii) adult frog.
We see that tadpole larva is totally different from its adults.
Tadpole has gills for respiration because it lives outside the water. The sudden changes come in the body of tadpole like gills are replaced lungs. These sudden changes are called metamorphosis.
Example of animals in which metamorphosis take place are : Frog, silkworm.

Question 10.
Complete the crossword puzzle using the hints given below.
Across
1. The process of the fusion of the gametes.
6. The type of fertilization in hen.
7. The term used for bulges observed on the sides of the body of Hydra.
8. Eggs are produced here.

Down
2. Sperms are produced in these male reproductive organs.
3. Another term for the fertilized egg.
4. These animals lay eggs.
5. A type of fission in amoeba. 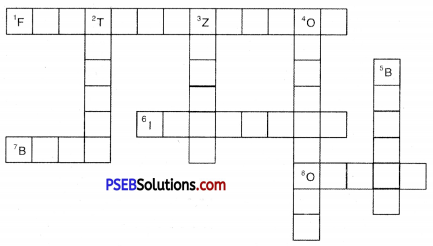 Question 1.
A hydra on fission produces two or more hydra. What is this type of asexual reproduction called ?
(a) Budding
(b) Binary Fission
(c) Vegetative reproduction
(d) Gamete.
Answer:
(a) Budding.

Question 2.
The following diagram is of which organism ? Question 3.
The following diagram shows the life cycle of which organism ? 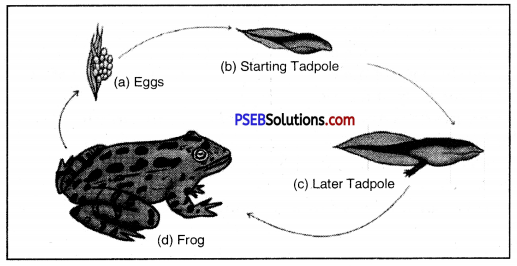 Answer:
Life cycle of a frog.

Question 4.
The following Diagram shows which process of asexual reproduction of amoeba ? 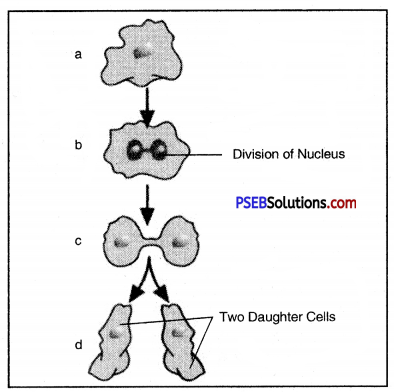 Question 3.
How many methods of reproduction are there in the plants and animals ?
Answer:
Two:

Question 6.
What are the specialised cells present in the sex organs ?
Answer:
Gametes.

Question 8.
In which organisms do the buds remain attached to the parent organisms ?
Answer:
Sponges, Corals.

Question 9.
What is zygote ?
Answer:
Zygote. Zygote is the first structure formed after union of sperm and egg.

Question 11.
Which is the larger-sperm or ovum ?
Answer:
Ovum or egg.

Question 13.
Name two animals in which fertilization is external.
Answer:

Question 18.
What is the function of sperm duct ?
Answer:
Sperm duct (vas deferens). It conducts sperms from testes to urethra.

Question 19.
What is hymen ?
Answer:
Hymen. In the case of virgins at the orifice of vagina present a thin membranous diaphragm called hymen. It is perforated to pass menstrual discharge.

Question 20.
In which type of asexual reproduction takes place in Hydra ?
Answer:
Budding.

Question 21.
Define cloning.
Answer:
Cloning. It is the production of an identical cell, any other part, or a complete organism.

Question 22.
Name the sheep which was cloned successfully by Ian Wilmont at the Roslin Institute in Edenburgh, Scotland.
Answer:
Dolly sheep.

Question 23.
Name the first mammal to be cloned.
Answer:
A sheep named Dolly which was born on 5th July, 1996.

Question 25.
What is the function of tail of sperm in man ?
Answer:
For movement.

Question 26.
What is ovulation ?
Answer:
Production of eggs from the ovaries is called ovulation.

Question 27.
What is a test tube baby ?
Answer:
The babies produced by an artificial fertilization outside the body are called test tube babies.

Question 29.
Where does test tube baby develops ?
Answer:
In uterus.

Sexual reproduction in animals.
In sexual reproduction, there are two parents. The parents have sex organs which produce sex cells. Females produce eggs while males produce sperms. Sperms are produced by sex organs called testes. Female sex cells are called eggs or ova (singular ovum). Ova are produced by sex organ called ovaries. A sperm enters an egg. This is called fertilization. A fertilized egg divides many times. The cells develops into an embryo which later develops into an adult.

Question 4.
Name two organisms which produce by two types of asexual methods. What are the methods ?
Answer:

Question 5.
What are gametes ? What is the difference between the unisexual and hermaphrodite ?
Answer:
Gametes.
Gametes are the reproductive cells which are produced by the sex organs of the body. There are two types of gametes-male and female. Due to the union of gametes, fertilization takes place.

Question 6.
What is hermaphrodite ? Give two examples.
Answer:
The organisms which can produce both the male and female gamete are called hermaphrodites or bisexual. Examples:

Question 7.
In how many ways can a tissue grow in size ?
Answer:
Growth means getting bigger in size. The tissue can grow in size by:

(iv) Differences between Foetus and Embryo

Question 15.
Write a note on ‘test tube babies’.
Answer:
Test tube babies.
Actually this name is a wrong name because babies cannot grow in test tubes. In some women oviducts are blocked. These women unable to bear babies because sperms can not reach the egg for fertilization. In such cases, doctors collect freshly released egg and sperms and keep them together for a few houjs for in vitro fertilization (fertilization outside the body). After the zygote develops for about a week, it is placed in the mother’s uterus. Complete development takes place in the uterus and the baby is born like any other baby.

During spring or rainy season, frogs and toads move to ponds. As the eggs are laid, the male frog deposits sperms over them. Each sperm swims randomly in water with the help of its long tail. The sperms come in contact with the eggs. This results in fertilization.

Question 17.
Why animals which undergo external fertilization such as frog and fish lay eggs in hundreds while a hen lays only one egg at a time ?
Answer:
Frog and fish release hundred of eggs and millions of sperms. But all the eggs are not fertilized because eggs and sperms get exposed to water movement, wind and rainfall. Some animals found in water may feed on eggs. Thus production of large number of eggs are necessary to ensure fertilization.

Question 19.
What is Menstruation ?
Answer:
Menstruation.
The rhythmic changes in the uterus which occur about every 28 days throughout the reproductive cycle of women except the pregnancy is called menstrual cycle. The female sex hormones initiate the thickening of the uterine wall for the implantation of a fertilized ovum. If the ovum is not fertilized, the lining wall is broken down and discharged from the body. This is called menstruation. Normally the menstrual cycle starts at the age of 10-14 years and stops at the age of 45-50 when menopause is reached. Male reproductive system. The male reproductive system of man consist of following organs:
1. A pair of testes.
The male gonads (primary sex organs) are a pair of testes. They are paired organs and are located outside the body cavity in a pouch called scrotum. It helps in keeping the testes at a cooler temperature than the body temperature essential for maintenance and function of spermatogenic tissue. It measures 4 cm, 3 cm and 2.5 cm in length, thickness and width. Each testis is formed of large number of seminiferous tubules, they produce sperms and glandular cells which produce sex hormone, testosterone.

2. A pair of epididymis.
At the end of each seminiferous tubule is a very small tubule called the vas efferens. The vasa efferentia lead into epididymis. In the epididymis sperms are stored.

3. A pair of vasa deferentia (Sing. Vas deferens).
Corpus epididymis continues as vas deferens. It is a muscular tube. It is about 30 cm long. It leaves the scrotum by inguinal canal passes over the urinary bladder and receives a duct from seminal vesicle to form ejaculatory Fig. Male reproductive organs duct.

4. Male Urethra.
It is about 7-9 inches long. It leaves the urinary bladder and is joined by ejaculatory duct. It passes through penis and opens at the tip. The tip of penis is called glans penis and is covered over by fold of skin which is known as prepuce.

5. Reproductive glands (Accessory or secondary glands). They are prostate gland and Cowper’s gland. 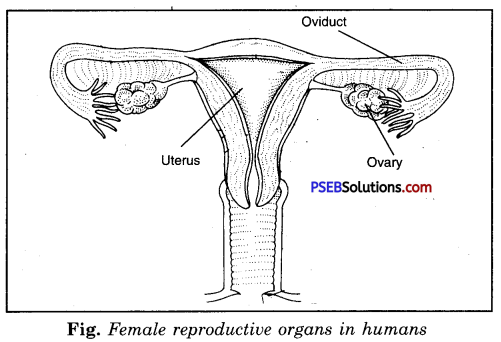 Reproductive system of woman. It consists of following organs:
1. A pair of ovaries.
There are present a pair of ovaries (primary female sex organ) measuring 3 cm, 2 cm and 1 cm in length, breadth and thickness. Each ovary is a small almond-like flattened body. Each ovary lies in the abdominal cavity on either side of the middle line. Ovaries produce female sex cells, ova and their glandular cells produce hormones. Each ovary is attached to dorsal abdominal wall by a fold of peritoneal membrane called mesovarium.

3. Uterus.
The uterus is hollow, muscular, thick walled organ. Its mucous membrane contains small gland cells and many capillaries. It receives ova and pass them on to vagina. The lower part of uterus is called cervix.

4. Vagina.
It is muscular tube measures 8 cm in length and lined with stratified epithelium. It receives the semen from the male during mating and during child birth, it conveys the child to the outside.

Question 3.
Write a note on cloning.
Answer:
Cloning. It is the production of an identical cell or a complete organism. Dolly, a sheep, was successfully cloned. It was the first mammal to be cloned in 1996.