Question 3.
Discuss the effects of deforestation on the following.
(a) Wild animals
(b) Environment
(c) Villages (Rural areas)
(d) Cities (Urban areas)
(e) Earth
(f) The next generation.
Answer:
(a) Effect of deforestation on wild animals.
Plant and trees are the habitat and food for wild animals. So cutting of trees destroy the natural habitat of wild animals and thus they would become endangered species.

(b) Effect of deforestation on environment.
Deforestation decreases the level of oxygen in the atmosphere. Rainfall and the fertility of soil also decreases due to deforestation. As a result, there are increased chances of natural calamities like floods and drought.

(c) Effect of deforestation on villages (rural areas).
Most of the agriculture is done in rural areas. When trees and plants (deforestation) are cut down, it leads to change in soil properties.

(d) Effect of deforestation on cities (urban areas).
In cities there run more factories and automobiles. So deforestation will pollute the environment and hence the life in cities will not be healthy for living.

Question 4.
What will happen if:
(a) we go on cutting trees
(b) the habitat of an animal is disturbed
(c) the top layer of soil is exposed ?
Answer:
(a) If we go on cutting trees continuously, rainfall and the fertility of the soil will decrease. Hence there are increased chances of natural calamities such as floods and drought.

(b) If the habitat of an animal is disturbed, some of the species do not get appropriate food and shelter and with the passage of time they will come under the category of endangered species.

(c) If the top layer of the soil is exposed, the soil has less humus and become less fertile. Gradually the land converts into deserts. It is called desertification.

Question 5.
Answer in brief:
(a) Why should we conserve biodiversity ?
(b) Protected forests are also not completely safe for wild animals. Why ?
(c) Some tribals depend on the jungle. How ?
(d) What are the causes and consequences of deforestation ?
(e) What is Red Data Book ?
(f) What do you understand by the term migration ?
Answer:
(a) Biodiversity is the variety of plants, animals and micro-organisms generally found in an area. Animals that feed on plants too are selective in their feeding habits e.g. the red panda prefers tender bamboo shoots and the koala bear of Australia feeds mostly on eucalyptus leaves. Birds and antelopes too, are very selective in their feeding habits. Wide variety of plants in the forests fulfil the needs of different herbivorous animals and strengthen the food chain. Therefore, to conserve wild life, it is necessary to conserve the rich variety of plants and animals.

(b) Protected forests are also not completely safe for wild animals because people living in the neighbourhood encroach upon them and destroy them.

(c) Some tribes depend on the jungle. Rock shelters are also found inside the Satpura National Park which are the pre-historic evidences of human life in these jungles.

(d) Causes of Deforestation.
Due to changing lifestyle of the people and development of technology in the 20th century, the utilization of forest products has increased tremendously. The main factors leading to the felling of trees for our comfort and convenience are:

(f) Migration.
Going far away from their original habitat of some species during a particular period of the year is called migration. Migration mostly takes place in birds. Birds migrate to other places due to climatic changes e.g. Bar headed goose, Great Cormorant, Surkhab are the migratory birds.

Question 9.
Find out about the national parks in your state. Identify and show their locations in the outline map of India.
Answer:
Do yourself.

Question 10.
Why should paper be saved ? Prepare a list of ways by which you can save paper.
Answer:
Need of saving paper.
One tonne of paper needs 17 full grown trees. So we should save paper. Paper can be recycled for 5-7 times and can be used. We should save, reuse used paper and recycle it. By this we not only save trees but also.save energy and water needed for manufacturing paper. Moreover, the harmful chemicals used in paper making will also be reduced.

Question 11.
Complete the word puzzle.
Down
1. Species on the verge of extinction.
2. A book carrying information about endangered species.
5. Consequence of deforestation.
Across
1. Species which have vanished.
3. Species found only in a particular habitat.
4. Variety of plants, animals and micro-organisms found in an area. 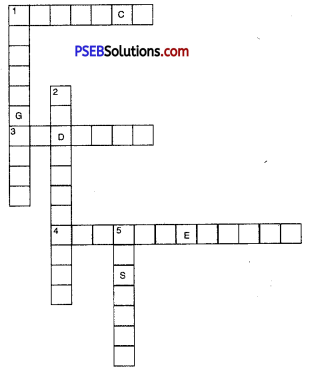 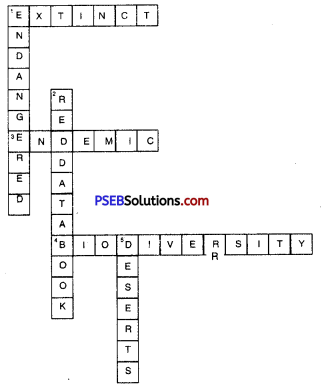 2. Wild plants and animals in the forest constitute ………………
Answer:
wildlife

4. The conversion of fertile land into deserts is called …………….
Answer:
desertification

5. …………………. is that part of the earth in which living organisms exist or which supports life.
Answer:
Biosphere

9. …………………. species are exclusively found in a particular area only.
Answer:
Endemic

10. …………………… is a group of populations which are capable of interbreeding with each other.
Answer:
species

Question 4.
What is the result of decrease in rainfall and fertility of soil ?
Answer:
This results in the increase of natural calamities such as floods and drought.

Question 6.
What is the result of increased amount of carbon dioxide in the atmosphere ?
Answer:
It leads to global warming.

Question 9.
Name the place which has plants and animals similar to those of the upper Himalayan peaks and those belonging to lower Western Ghats.
Answer:
Pachmarhi Biosphere Reserve.

Question 11.
What is biosphere ?
Answer:
Biosphere. It is that part of earth in which living beings exist or which supports life.

Question 12.
Define biodiversity.
Answer:
Biodiversity. It refers to variety in life existing on earth, their inter relationships and their relationship with the environment.

Question 17.
Define fauna.
Answer:
Fauna. These are the animals found in a particular area.

Question 19.
Define species.
Answer:
Species. It is a group of population which are capable of interbreeding with each other.

Question 20.
What are endemic species ?
Answer:
Endemic Species. These are exclusively found in a particular area only which may be any geographical unit like a state, zone or a country.

Question 23.
Which factors affect the natural habitat of endemic species and endanger their existence ?
Answer:

Question 26.
What are Zoos ?
Answer:
Zoos. Zoos are also the places where animals are protected.

Question 27.
What are national parks ?
Answer:
National parks are large and diverse reserves to protect whole sets of ecosystems.

Question 2.
How can soil be conserved ?
Answer:
Soil Conservation:

Question 5.
Explain biosphere reserves.
Answer:
Biosphere Reserve.
It is a specified area in which multiple use of land is permitted by dividing it into certain zones and each zone is specified for particular activity.

The concept of Biosphere Reserve has been evolved by Man and Biosphere (MBA) programme of UNESCO. In the biosphere reserve, multiple land use is allowed by designating various zones such as core, buffer zone and manipulation zone. In a biosphere reserve, wild population, traditional life ,style of tribals and varied domesticated plant and animal genetic resources are protected. 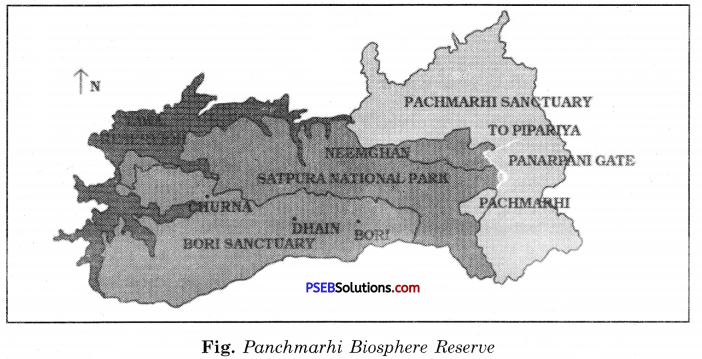 Question 6.
Discuss the concept of “endangered species.”
Answer:
Endangered Species.
The species (or taxa) which are on the verge of extinction and whose survival is unlikely if the causal factor continue to be operating. These are species with only limited number of individual survivals. They are in immediate danger of extinction e.g., the great Indian bustard bird which is inhabitant of the semiarid areas of Rajasthan, Gujarat and Maharashtra is highly endangered bird.

Question 7.
What are the factors responsible for global warming ?
Answer:
The continuously rising levels of carbon dioxide and some other gases in the air result in an increase in the temperature of atmosphere causing warming up of the atmosphere of earth i.e. global warming.

Question 10.
How do plants check soil erosion ?
Answer:
The underground parts of the plants (i.e. roots) help in binding the soil particles. The soil with plant cover is not eroded by water or wind. Hence, plants check the soil erosion.

Question 14.
To protect a forest means to conserve air, soil and water. Explain.
Answer:
The forest is complex biological system. Though it is self-sufficient, it depends on the other renewable resources to maintain itself. Therefore, to protect a forest it is necessary to conserve air, soil and water. A forest relies on specific climatis conditions for its survival. At times, large scale man-made geographical alterations such as huge dams and excessive mining have disturbed the environment of the region causing severe damage to the forests in the area. Air pollution from industries situated even miles away have similar ill-effects on the forests.

Question 15.
How does habitat destruction affect wildlife ?
Answer:
Animals and plants have a strong relationship with their habitat. Certain living organisms can survive only in a specific kind of environment. The golden lion tamarins were found in a small area of Brazilian rain forests. It was their only natural habitat. When this area was destroyed, the beautiful little golden coloured mammal became homeless.

Although, Brazil has many more rain forests, today, few golden lion tamarins survive only in the zoos and probably will never be able to return to the wild habitat because their natural habitat has been destroyed by man. When a forest dies, a large number of animals become endangered or extinct.

Question 17.
What is an ecosystem ?
Answer:
Ecosystem. The biotic community together with the physical environment (abiotic components) forms an interacting system called the ecosystem. It may be natural or artificial. An ecosystem may be temporary e.g. crop field or permanent e.g. forest. An ecosystem may be as big as an ocean or forest or as small as wood. Thus ecosystem is any structural and functional unit of the environment that can be identified.

Ecosystem is an interacting system consisting of a community (living) components and environment (abiotic components) where both influence each other.

Question 18.
What are the advantages of silviculture ?
Answer:
Silviculture is the major project started to replenish forest. It is of two-fold advantages:

Question 19.
What are the functions of biosphere reserves ?
Answer:
Functions of Biosphere Reserve:

Question 21.
Write a note on migratory birds.
Answer:
Migratory Birds. Birds who cover long distances to reach another land are known as the migratory birds. The migratory birds are Bar Headed Goose, Great Cormorant. Migratory birds fly to far away specific areas every year during a particular time because of climatic changes. They fly for laying eggs as the weather in their natural habitat becomes very cold and inhospitable.

Question 22.
Write a note on reforestation.
Answer:
Reforestation.
It is the restocking of the destroyed forest by planting more new trees. We should plant at least as many trees as we cut. Reforestation can take place naturally also. If the deforested area is left undisturbed, it re-establishes itself. If we have to retain our green wealth for generations, plantation of more trees is required.

Government of India has implemented the National Forest Policy in 1952. It aimed at forest coverage of one-third of the total land area of the country. On the failure of this policy, Indian government revised the policy in 1980. This was named Forest (conservation) Act. This act aimed at preservation and conservation of natural forests and meeting the basic needs of the people.

Question 3.
Give some sketches of flora and fauna of Pachmarhi Biosphere Reserve.
Answer: