Question 1.
Using the concept of force between two infinitely long parallel current carrying conductors define one ampere of current.
Answer:
One ampere is that value of current which flows through two straight, parallel infinitely long current carrying conductors placed in air or. vacuum at a distance of 1 m and they experience a force of attractive or repulsive nature of magnitude 2 × 10-7 N/m on their unit length.

Question 2.
State Ampere’s circuit law.
Answer:
It states that the line integral of the magnetic field \(\vec{B}\) around any closed circuit is equal to p0 times the total current passing through this closed circuit.
\(\oint \vec{B} \cdot \overrightarrow{d l}\) = μ0 I

Question 3.
A narrow beam of protons and deuterons, each having the same momentum, enters a region of uniform magnetic field directed perpendicular to their direction of momentum. What would be the ratio of the radii of the circular path described by them?
Answer:
For the given momentum of charge particle, radius of circular paths depends on charge and magnetic field as
r = \(\) ⇒ r ∝ \(\)
For given momentum,
∴ rproton : rdeuteron = 1 : 1
As they have same momentum and charge moving in a small magnetic field.

Question 4.
Write the expression, in a vector form, for the Lorentz magnetic force \(\overrightarrow{\boldsymbol{F}}\) due to a charge moving with velocity \(\vec{v}\) in a magnetic field \(\overrightarrow{\boldsymbol{B}}\). What is the direction of the magnetic force?
Answer:
Force, \(\vec{F}=q(\vec{v} \times \vec{B})\)
Obviously, the force on charged particle is perpendicular to both velocity \(\vec{v}\) and magnetic field \(\vec{B}\).

Question 6.
A square coil OPQR of side a carrying a current 7, is placed in the Y-Z plane as shown here. Find the magnetic moment associated with this coil. 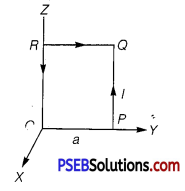 Answer:
The magnetic moment associated with the coil, is \(\vec{\mu}\)m = Ia2î

Question 7.
Under what condition is the force acting on a charge moving through a uniform magnetic field is minimum?
Answer:
Fm = qvB sinθ; for minimum force sinθ = 0. i.e., force is minimum when charged particle move parallel or anti-parallel to the field.

Question 9.
Verify that the cyclotron frequency ω = eB/m has the correct dimensions of [T]-1. (NCERT Exemplar)
Or A charged particle of charge e and mass m is moving in an electric field E and magnetic field B. Construct dimensionless quantities and quantities of dimension [T]-1. (NCERT Exemplar)
Answer:
For a charge particle moving perpendicular to the magnetic field, the magnetic Lorentz forces provides necessary centripetal force for revolution.
\(\frac{m v^{2}}{R}\) = qvB
On simplifying the terms, we have
∴ \(\frac{q B}{m}=\frac{v}{R}\) = ω
Finding the dimensional formula of angu
∴ [ω] = \(\left[\frac{q B}{m}\right]=\left[\frac{v}{R}\right]\) = [T] -1

Question 10.
Show that a force that does no work must be a velocity dependent force. (NCERT Exemplar)
Answer:
Let no work is done by a force, so we have
dW = F.dl = 0
⇒ F. v dt = 0 (Since, dl = v dt and dt ≠ 0)
⇒ F.v = 0
Thus, F must be velocity dependent which implies that angle between F and v is 90°. If v changes (direction), then (directions) F should also change so that above condition is satisfied. 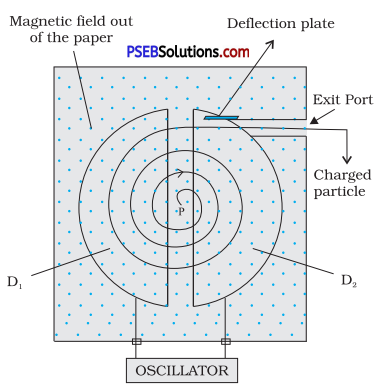 Inside the dees the particle is shielded from the electric field and magnetic field acts on the particle and makes it to go round in a circular path inside a dee.

Question 3.
(i) State Ampere’s circuital law expressing it in the integral form.
(ii) Two long co-axial insulated solenoids S1 and S2 of equal length are wound one over the other as shown in the figure. A steady current I flows through the inner solenoid S1 to the other end B which is connected to the outer solenoid S2 through which the some current I flows in the opposite direction so, as to come out at end A. If n1 and n2 are the number of turns per unit length, find the magnitude and direction of the net magnetic field at a point
(a) inside on the axis and
(b) outside the combined system. 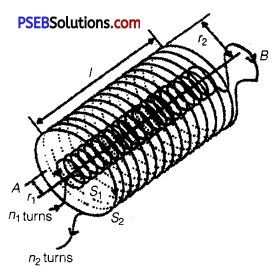 Answer:
(i) Ampere’s circuital law states that the line integral of magnetic field
(B) around any closed path in vacuum is μ0 times the net current (I) threading the area enclosed by the curve.
Mathematically, \(\oint \vec{B} \cdot d \vec{l}\) = μ0I
Ampere’s law is applicable only for an Amperian loop as the Gauss’s law is used for Gaussian surface in electrostatics.

Question 4.
(a) State Biot-Savart law and express this law in the vector
form.
(b) Two identical circular coils, P and Q each of radius R, carrying currents 1 A and √3 A, respectively, are placed concentrically and perpendicular to each other lying in the XY and YZ planes. Find the magnitude and direction of the net magnetic field at the centre of the coils. ’
Answer:
(a) According to Biot-Savart’s law the magnitude of the magnetic field \(\overrightarrow{d B}\) due to a small element of length dl of a current carrying wire at a point P, is proportional to the current I, the element length dl and is inversly proportional to the square of the distance r. It is also proportional to sinθ, 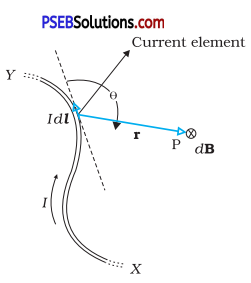 Question 7.
A long straight wire carrying current of 25 A rests on a table as shown in figure. Another wire PQ of length 1 m, mass 2.5 g carries the same current but in the opposite direction.
The wire PQ is free to slide up and down. To what height will PQ rise? (NCERT Exemplar) 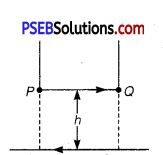 Answer:
The magnetic field produced by long straight wire carrying current of 25 A rests on a table on small wire
B = \(\frac{\mu_{0} I}{2 \pi h}\)
The magnetic force on small conductor is , F = BIl sin θ = BIl
Force applied on PQ balance the weight of small current carrying wire.

Question 1.
Derive an expression for the force per unit length between two long straight parallel current carrying conductors. Hence define SI unit of current (ampere).
Answer:
Suppose two long thin straight conductors (or wires) PQ and RS are placed parallel to each other in vacuum (or air) carrying currents I1 and Isub>2 respectively. It has been observed experimentally that when the currents in the wire are in the same direction, they experience an attractive force (fig. a) and when they carry currents in opposite directions, they experience a repulsive force (fig. b).

Let the conductors PQ and RS carry currents I1 and I2 in same direction and placed at separation r.

On the other hand if the currents I1 and I2 in wires are in opposite directions, the force will be repulsive. The magnitude of force in each case remains the same.

Definition of SI Unit of Current (Ampere) : In SI system of fundamental unit of current ‘ampere’ is defined assuming the force between the two current carrying wires as standard. 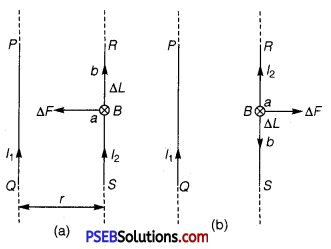 Construction: It consists of a rectangular coil wound on a non-conducting metallic frame and is suspended by phosphor bronze strip between the pole-pieces (N and S) of a strong permanent magnet. A soft iron core in cylindrical form is placed between the coil.

One end of coil is attached to suspension wire which also serves as one terminal (Tx) of galvanometer. The other end of coil is connected to a loosely coiled strip, which serves as the other terminal (T2). The other end of the suspension is attached to a torsion head which can be rotated to set the coil in zero position. A mirror (M) is fixed on the phosphor bronze strip by means of which the deflection of the coil is measured by the lamp and scale arrangement. The levelling screws are also provided at the base of the instrument.

The pole pieces of the permanent magnet are cylindrical so that the magnetic field is radial at any position of the coil. 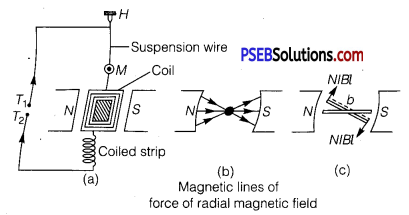 Principle and Working : When current (I) is passed in the coil, torque τ acts on the coil, given by
τ = NIABsinθ

where θ is the angle between the normal to plane of coil and the magnetic field of strength B, N is the number of turns in a coil.

When the magnetic field is radial, as in the case of cylindrical pole pieces and soft iron core, then in every position of coil the plane of the coil, is parallel to the magnetic field lines, so that θ = 90° and sin 90 ° = 1. The coil experiences a uniform coupler.
Deflecting torque, τ = NIAB
If C is the torsional rigidity of the wire and θ is the twist of suspension strip, then restoring torque = C0. For equilibrium, deflecting torque = restoring torque
i.e., NIAB = Cθ
θ = \(\frac{N A B}{C}\)I ………… (1)
i.e., θ ∝ I
Deflection of coil is directly proportional to current flowing in the coil and hence we can construct a linear scale.

(b)
(i) The cylindrical, soft iron core makes the (1) field radial and (2) increases the strength of the magnetic field, i.e., the magnitude of the torque.