Question 2.
Give one chemical test to distinguish between the following pairs of compounds.
(i) Methylamine and dimethylamine
(ii) Secondary and tertiary amines
(iii) Ethylsunine and aniline
(iv) Aniline and benzylrnnlne
(v) Aniline and N-inethylaniline.
Answer:
(i) Methylamlne is 1° amine, therefore, it gives carbylamine test, i.e., when heated with an alcoholic solution of KOH and CHCl3, it gives an offensive smell of methyl carbylamine. In contrast, dimethylamine is a secondary amine and hence does not give this test.

When the yellow oily liquid is warmed with a crystal of phenol and a few drops of conc. H2SO4, a greenish solution is formed. It changes to red on dilution with water but changes to deep blue on addition of aqueous NaOH solution. Tertiary amines do not give this test.

(iii) Ethylamine (primary aliphatic amine) and aniline (primary aromatic amine) can be distinguished by azo dye test.
Aniline responds to this test whereas ethyl amine does not.

(iv) Benzylantine reacts with nitrous acid to form a diazonium salt which being unstable even at low temperature, decomposes with evolution of N2 gas.

Aniline reacts with HNO2 to form benzene diazonium chloride which is stable at 273-278 K and hence does not decompose to evolve N2 gas.

(v) Aniline being a primary amine gives carbylamine test, i.e., when heated with an alcoholic solution of KOH and CHCl3, it gives an offensive smell of phenyl isocyanide. In contrast, N-methyl aniline, being secondary amine does not give this test.

Question 3.
Account for the following:
(i) pKb of aniline is more than that of methylamine.
(ii) Ethylamme is soluble in water whereas aniline is not.
(iii) Methylamine in water reacts with ferric chloride to precipitate hydrated ferric oxide.
(iv) Although the amino group is o-and p-directing in aromatic electrophilic substitution reactions, aniline on nitration gives a substantial amount of m -nitroaniline.
(v) Aniline does not undergo Friedel Crafts reaction.
(vi) Diazonium salts of aromatic amines are more stable than those of aliphatic amines.
(vii) Gabriel phthalimide synthesis is preferred for synthesizing primary amines.
Answer:
(i) In aniline due to resonance, the lone pair of electrons on the N-atom are delocalized over the benzene ring. Due to this, electron density on the nitrogen decreases. On the other hand, in CH3NH2, +I effect of CH3 increases the electron density on the N-atom. Consequently, aniline is a weaker base than methylamine and hence its pKb value is higher than that of methylamine.

(ii) Ethylamine dissolves in water because it forms H-bonds with water molecules as shown below :

In aniline, due to the large hydrocarbon part the extent of H-bonding decreases considerably and hence aniline is insoluble in water.
(iii) Methylamine in water reacts with ferric chloride to precipitate hydrated fem oxide:

Due to the +I effect of – CH3 group, methylamine is more basic than water. Therefore, in water, methylamine produces OH– ions by accepting H+ ions from water. Thus, nitration of aniline gives a substantial amount of m-nitroaniline due to protonation of the amino group.

(v) Aniline being a Lewis base, reacts with Lewis acid AlCl3 to form a salt.

As a result, N of aniline acquires positive charge and hence, it acts as a strong deactivating group for electrophilic substitution reaction. Consequently, aniline does not undergo Friedel Crafts’ reaction.
(vi) The diazonium ion undergoes resonance as shown below:

This resonance accounts for the stability of the diazonium ion. Hence, diazonium salts of aromatic amines are more stable than those of aliphatic amines. Question 6.
Describe a method for the identification of primary, secondary, and tertiary times. Also, write chemical equations of the reactions involved.
Answer:
Primary, secondary and tertiary amines can be identified and distinguished by Hmsberg’s test. In this test, the amines are allowed to react with Hinsberg’s reagent, benzene sulphonyl chloride (C6H5SO2Cl). The three types of amines react differently with Hinsbergs reagent. Therefore, they can be easily identified using Hinsberg’s reagent. Primary amines react with benzene sulphonyl chloride to form N-allyl benzene sulphonyl amide which is soluble in alkali.

Due to the presence of a strong electron-withdrawing sulphonyl group in the sulphonamide, the H-atom attached to nitrogen can be easily released as proton. So, it is acidic and dissolves in alkali. Secondary amines react with Hinsberg’s reagent to give a sulphonamide which is insoluble in alkali.

There is no H-atom attached to the N-atom in the sulphonamide. Therefore, it is not acidic and insoluble in alkali.
On the other hand, tertiary amines do not react with Hinsberg’s reagent at all.

(ii) Diazotisation: Aromatic primary amines react with nitrous acid (prepared in situ from NaNO2 and a mineral acid such as HCl) at low temperatures (273-278 K) to form diazonium salts. This conversion of aromatic primary amines into diazonium salts is known as diazotization. For example, on treatment with NaNO2 and HCl at 273 – 278 K, aniline produces benzene diazonium chloride, with NaCl and H2O as by-products.

(iii) Hofmann’s bromamide reaction: When an amide is treated with bromine in an aqueous or ethanolic solution of sodium hydroxide, a primary amine with one carbon atom less than the original amide is produced. This degradation reaction is known as Hofmann bromamide reaction. This reaction involves the migration of an alkyl or aryl group from the carbonyl carbon atom of the amide to the nitrogen atom. It can be observed that the para-positions of phenol and aniline are coupled with the diazonium salt. This reaction proceeds through electrophilic substitution.

(v) Ammonolysis: When an alkyl or benzyl halide is allowed to react with an ethanolic solution of ammonia, it undergoes nucleophilic substitution reaction in which the halogen atom is replaced by an amino (- NH2) group. This process of cleavage of the carbon-halogen bond is known as ammonolysis.

When this substituted ammonium salt is treated with a strong base such as sodium hydroxide, amine is obtained.

Though primary amine is produced as the major product, this process produces a mixture of primary, secondary and tertiary amines, and also a quaternary ammonium salt as shown.

It involves the treatment of phthalimide with ethanolic potassium hydroxide to form potassium salt of phthalimide. This salt is further heated with alkyl halide, followed by alkaline hydrolysis to yield the corresponding primary amine. 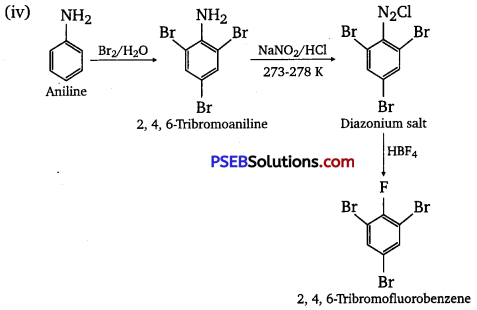 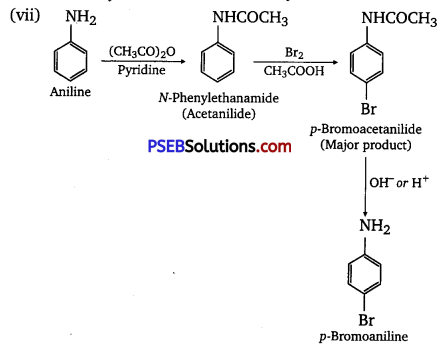 Question 9.
Give the structures of A, B and C In the following reactions: Therefore, compound ‘B’ (from which ‘C’ is formed) must be benzamide, (C6H5CONH2)

Further, benzamide is formed by heating compound ‘A’ with aqueous ammonia. Therefore, compound ‘A’ must be benzoic acid.

The given reactions can be explained with the help of the following equations: But aryl halides do not undergo nucleophilic substitution with the anion formed by the phthalimide.

Hence, aromatic primary amines cannot be prepared by this process.

Question 13.
Write the reactions of (i) aromatic and (ii) aliphatic primary amines with nitrous acid.
Answer:
(i) Aromatic amines react with nitrous acid (prepared in situ from NaNO2 and a mineral acid such as HCl) at 273 – 278 K to form stable aromatic diazonium salts i.e., NaCl and H2O.

(ii) Aliphatic primary amines react with nitrous acid (prepared in situ from NaNO2 and a mineral acid such as HCl) to form unstable aliphatic diazonium salts, which further produce alcohol and HCl with the evolution of N2 gas.

(b) Anilinium ion obtained by accepting a proton is less stabilized by resonance.

So, aniline is a weaker base than alkyl amines, in which the +1 effect increases the electron density on the nitrogen atom.

Question 1.
Classify the following amines as primary, secondary or tertiary:

Question 2.
(i) Write structures of different isomeric amines corresponding to the molecular formula, C4H11N.
(ii) Write IUPAC names of all the isomers.
(iii) What type of isomerism is exhibited by different pairs of amines?
Answer:
(i) and (ii)
Primary amines :

(ii) Benzene is converted into aniline which can be subsequently heated with excess of methyl iodide under pressure to obtain N, N-dimethylaniline.

Question 6.
Write reactions of the final alkylation product of aniline with excess of methyl iodide in the presence of sodium carbonate solution.
Answer: Question 7.
Write the chemical reaction of aniline with benzoyl chloride and write the name of the product obtained.
Answer: Question 8.
Write structures of different isomers corresponding to the molecular formula, C3H9N. Write IUPAC names of the isomers which will liberate nitrogen gas on treatment with nitrous acid.
Answer:
In all, four structural isomers are possible. These are as follows:
Primary amines :

Only primary amines react with HNO2 to liberate N2 gas.