Question 1.
CH3NH2 is more basic than C6H5NH2 why?
Answer:
Aliphatic amines (CH3NH2) are stronger bases than aromatic amines (C6H5NH2) because due to resonance in aromatic amines, the lone pair of electrons on the nitrogen atom gets delocalized over the benzene ring and thus is less easily available for protonation.

Question 2.
What is the role of pyridine in the acylation reaction of amines? [NCERT Exemplar]
Answer:
Pyridine and other bases are used to remove the side product, L e., HCl from the reaction mixture.

Question 3.
A primary amine, RNH2 can be reacted with CH3 – X to get secondary amine, R-NHCH3 but the only disadvantage is that 3° amine and quaternary ammonium salts are also obtained as side products. Can you suggest a method where RNH2 forms only 2° mine? [NCERT Exemplar]
Answer:

Primary amines show carbylamine reaction in which two H-atoms attached to N-atoms of NH2 are replaced by one C-atom. On catalytic reduction, isocyanide (formed) produces secondary amine and not tertiary or quaternary salts.

Question 4.
What is Hinsberg reagent? (NCERT Exemplar)
Answer:
Benzene sulphonyl chloride (C6H5SO2Cl) is known as Hinsberg reagent. It is used to distinguish between primary, secondary and tertiary amine.

Question 5.
The conversion of primary aromatic amines into diazonium salts is known as……
Answer:
Diazotisation.

Question 7.
What is the best reagent to convert nitrile to primary amine? [NCERT Exemplar]
Answer:
Reduction of nitriles with sodium/alcohol or LiAlH4 gives primary amine.

Question 8.
Suggest a route by which the following conversion can be accomplished: [NCERT Exemplar]

Question 1.
Write the structures of A, B and C in the following:

Question 2.
Give a chemical test to distinguish between C6H5CH2NH2 and C6H5NH2.
Answer:
C6H5CH2NH2 reacts with HNO2 at 273-278 K to give diazonium salt, which being unstable decomposes with brisk evolution of N2 gas.

whereas, C6H5NH2 reacts with HNO2 at 273-278 K to form stable benzene diazonium chloride, which upon treatment with an alkaline solution of f3-naphthol, gives an orange dye.

[NCERT Exemplar]
Answer:
The reaction exhibits an azo-coupling reaction of phenols. Benzene diazonium chloride reacts with phenol in such a manner that the para position of phenol is coupled with diazonium salt to form p-hydroxy azobenzene.

Similarly, in highly acidic conditions, aniline gets converted into an anilinium ion. From this, result aniline is no longer nucleophilic acid and hence will not couple with diazonium chloride. Hence, the reaction is carried out under mild conditions, i.e., pH 4-5

Question 1.
Predict the reagent or the product in the following reaction sequence : [NCERT Exemplar] Answer:
A correct sequence can be represented as follows including all reagents: 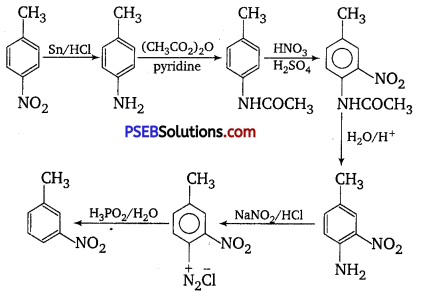 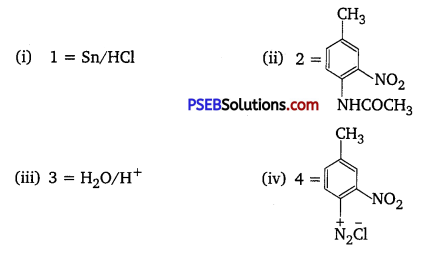 Question 2.
A hydrocarbon ‘A’ (C4H8) on reaction with HC1 gives a compound ‘B’, (C4H9Cl), which on reaction with 1 mol of NH3 gives compound ‘C’, (C4H11N). On reacting with NaNO2 and HCl followed by treatment with water, compound ‘C’ yields an optically active alcohol, ‘D’ Ozonolysis of ‘A’ gives 2 mols of acetaldehyde. Identify compounds ‘A’ to ‘D\ Explain the reactions involved. [NCERT Exemplar]
Answer:
(i)Addition of HCl to compound A shows that compound A is alkene.
Compound ‘B’ is C4H9Cl.
(ii) Compound‘B’reacts with NH2. It forms amine‘C’.

(iii) ‘C’ gives diazonium salt with NaNO2/HCl, which yields an optically active alcohol.
So, ‘C’ is aliphatic amine.
(iv) ‘A on ozonolysis produces 2 moles of CH3CHO. So, A is CH3– CH =CH-CH3 (But-2-ene).
Reactions