Question 1.
What is meant by the following terms? Give an example of the reaction in each case.
(i) Cyanohydrin
(ii) Acetal
(iii) Semicarbazone
(iv) Aldol
(v) Hemiaeetal
(vi) Oxime
(vii) Ketal
(viii) Imine
(ix) 2, 4-DNP derivative
(x) Schiffs base.
Answer:
(i) Aldehydes and ketones react with hydrogen cyanide (HCN) to yield cyanohydrins.
It is catalyzed by a base and the generated cyanide ion (CN–) being a stronger nucleophile readily adds to carbonyl compounds to yield corresponding cyanohydrin.

(ii) gem-Dialkoxy compounds in which the two alkoxy groups are present on the terminal carbon atom are called acetals. These are produced by the action of an aldehyde with two equivalents of a monohydric alcohol in the presence of dry HCl gas.

These are easily hydrolyzed by dilute mineral acids to regenerate the original aldehydes. Therefore, these are used for the protection of aldehydic group in organic synthesis.

(iii) Semicarbazones are derivatives of aldehydes and ketones and are produced by the action of semicarbazide on them in weak acidic medium.

These are used for identification and characterization of aldehydes and ketones.
(iv) Aldehydes and ketones having at least one α -hydrogen undergo a reaction in the presence of dilute alkali as catalyst to form f3-hydroxy aldehydes (aldol) or β-hydroxy ketones (ketol), respectively. This is known as aldol condensation.

(v) gem-Alkoxyalcohols are called hemiacetals. These are produced by addition of one molecule of a monohydric alcohol to an aldehyde in presence of dry HCl gas.

(vi) Oximes are produced when aldehydes or ketones react with hydroxylamine in weak acidic medium.

(vii) gem-Dialkoxyalkanes are called ketals. In ketals, the two alkoxy groups are present on the same carbon within the chain. These are produced when a ketone is heated with ethylene glycol in presence of diy HCl gas or p-toluene sulphonic acid (PTS).

These are easily hydrolyzed by dilute mineral acids to regenerate the original ketones. Therefore, ketals are used for protection of keto groups in organic synthesis.

group are called imines. These are produced when aldehydes and ketones react with ammonia derivatives. Question 5.
Draw structures of the following derivatives.
(i) The 2,4-dinitrophenylhydrazone of benzaldehyde
(ii) Cyclopropanone oxime
(iii) Acetaldehydedimethylacetal
(iv) The semicarbazone of cyclobutanone
(v) The ethylene ketal of hexan-3-one
(vi) The methyl hemiacetal of formaldehyde
Answer: Question 8.
How will you convert ethanal into the following compounds?
(i) Butane-1, 3-diol
(ii) But-2-enal
(iii) But-2-enoic acid
Answer:
(i) On treatment with dilute alkali, ethanal produces 3-hydroxybutanal gives butane-1, 3-diol on reduction.

(iii) When treated with Tollen’s reagent, but-2-ena produced in the above reaction produces but-2-enoic acid.

Question 9.
Write structural formulas and names of four possible aldol condensation products from propanal and butanal.
In each case, indicate which aldehyde acts as nucleophile and which as electrophile.
(i) Taking two molecules of propanal, one which acts as a nucleophile and the other as an electrophile.

(ii) Taking two molecules of butanal, one which acts as a nucleophile and the other as an electrophile.

Question 10.
An organic compound with the molecular formula C9H10O forms 2, 4-DNP derivative, reduces Tollen’s reagent, and undergoes Cannizzaro reaction. On vigorous oxidation, it gives 1,2-benzene dicarboxylic acid. Identify the compound.
Answer:
It is given that the compound (with molecular formula C9H10O) forms 2,4-DNP derivative and reduces Tollen’s reagent. Therefore, the given compound must be an aldehyde. Again, the compound undergoes Cannizzaro reaction and on oxidation gives 1, 2-benzene dicarboxylic acid. Therefore, the -CHO group is directly attached to a benzene ring and this benzaldehyde is ortho-substituted. Hence, the compound is 2-ethyl benzaldehyde.

The given reactions can be explained by the following equations: If C is butane-lol, then the acid (B) which it gives on oxidation must be butanoic acid and the ester (A) must be butyl butanoate. The relevant equations for all the reactions involved may be explained as follow :

Question 12.
Arrange the following compounds in increasing order of their property as indicated:
(i) Acetaldehyde, Acetone, Di-tert-butyl ketone, Methyl tert-butyl ketone (reactivity towards HCN)
(ii) CH3CH2CH(Br)COOH, CH3CH(Br)CH2COOH,
(CH3)2CHCOOH, CH3CH2CH2COOH (acid strength)
(iii) Benzoic acid, 4-Nitrobenzoic acid, 3, 4-Dinitrobenzoic acid, 4-Methoxybenzoic acid (acid strength)
Answer:
(i) When HCN reacts with a compound, the attacking species is a nucleophile, CN–. Therefore, as the negative charge on the compound increases, its reactivity with HCN decreases. In the given compounds, the +I effect increases as shown below. It can be observed that steric hindrance also increases in the same.

In the given compounds, -CH3 group has +I effect and Br– group has – I effect. Thus, acids containing Br– are stronger. Now, the +I effect of isopropyl group is more than that of n-propyl group. Hence, (CH3)2CHCOOH is a weaker acid than CH3CH2CH2COOH.

Question 13.
Give simple chemical tests to distinguish between the following pairs of compounds:
(i) Propanal and Propanone
(ii) Acetophenone and Benzophenone
(iii) Phenol and Benzoic acid
(iv) Benzoic acid and Ethyl benzoate
(v) Pentan-2-one and Pentan-3-one
(vi) Benzaldehyde and Acetophenone
(vil) Ethanal and Propanal
Answer:
(i) Propanal and propanone:
lodoform test: This test is given by propanone and not by propanal.
Propanone on reacting with hot NaOH/I2 gives a yellow precipitate of CHI3 while propanal does not.
2NaOH + I2 → NaI + NaOI + H2O

(iii) Phenol and benzoic acid: Benzoic acid reacts with NaHCO3 giving CO2 gas with effervescence, whereas phenol does not.

(vii) Ethanal and propanal: Ethanal responds to iodoform test, while propanal does not. 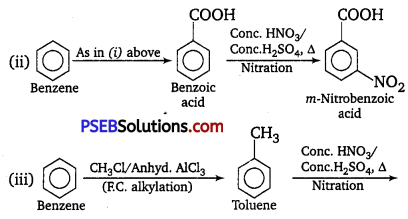 Question 16.
Describe the following:
(i) Acetylation
(ii) Cannizzaro reaction
(iii) Cross aldol condensation
(iv) Decarboxylation
Answer:
(i) Acetylation: The introduction of an acetyl functional group into an organic compound is known as acetylation. It is usually carried out in the presence of a base such as pyridine, dimethylaniline, etc. This process involves the substitution of an acetyl group for an active hydrogen atom. Acetyl chloride and acetic anhydride are commonly used as acetylating agents.
For example, acetylation of ethanol produces ethyl acetate.

(ii) Cannizzaro reaction: The self oxidation-reduction (disproportionation) reaction of aldehydes having no a-hydrogens on treatment with concentrated alkalis is known as the Cannizzaro reaction. In this reaction, two molecules of aldehydes participate where one is reduced to alcohol and the other is oxidized to carboxylic acid.
For example, when ethanol is treated with concentrated potassium hydroxide, ethanol and potassium ethanoate are produced. 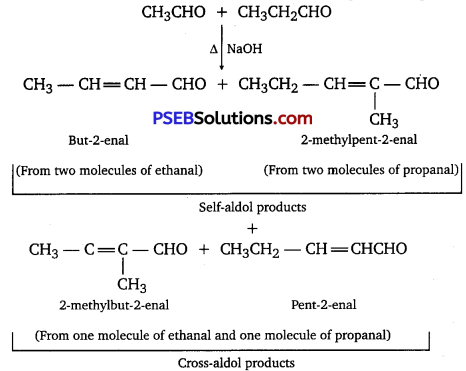 (iv) Decarboxylation: Decarboxylation refers to the reaction in which carboxylic acids lose carbon dioxide to form hydrocarbons when their sodium salts are heated with soda-lime (a mixture of NaOH and CaO in ratio 3:1). Question 18.
Give plausible explanation for each of the following:
(i) Cyclohexanone forms cyanohydrin in good yield but 2, 2, 6 trimethyl cyclohexanone does not.
(ii) There are two -NH2 groups in semicarbazide. However, only one is involved in the formation of semicarbazones.
(iii) During the preparation of esters from a carboxylic acid and an alcohol in the presence of an acid catalyst, the water or the ester should be removed as soon as it is formed.
Answer:
(i) Cyclohexanones form cyanohydrins according to the following equation :

In this case, the nucleophile CN– can easily attack without any steric hindrance. However, in the case of 2, 2, 6- trimethyl cyclohexanone, methyl groups at α-positions offer steric hindrances and as a result, CN– cannot attack effectively.

For this reason, it does not form a cyanohydrin.
(ii) Semicarbazide undergoes resonance involving only one of the two -NH2 groups, which is attached directly to the carbonyl carbon atom.

Therefore, the electron density on -NH2 group involved in the resonance also decreases. As a result, it cannot act as a nucleophile.
Since the other -NH2 group is not involved in resonance; it can act as a nucleophile and can attack carbonyl-carbon atoms of aldehydes and ketones to produce semicarbazones.
(iii) Ester along with water is formed reversibly from a carboxylic acid and an alcohol in presence of an acid.

If either water or ester is not removed as soon as it is formed, then it reacts to give back the reactants as the reaction is reversible. Therefore, to shift the equilibrium in the forward direction i.e., to produce more ester, either of the two should be removed.

Question 19.
An organic compound contain 69.77% carbon, 11.63% hydrogen and rest oxygen. The molecular mass of the compound Is 86. It does not reduce Tollens’ reagent but forms an additional compound with sodium hydrogen sulphite and give positive iodoform test. On vigorous oxidation, it gives ethanoic and propanoic acid. Write the possible structure of the compound.
Solution: Question 20.
Although phenoxide ion has more number of resonating structures than carboxylate ion, carboxylic acid is a stronger
acid than phenol. Why?
Answer:
(i) Resonance structures of phenoxide ion are: 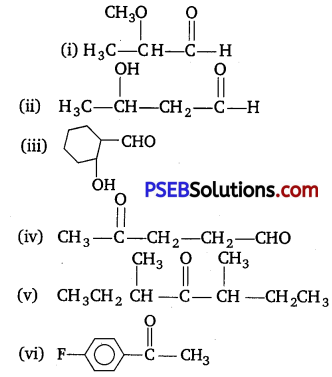 Question 2.
Write the structures of products of the following reactions; The +I effect of the alkyl group increases in the order:
Ethanal < Propanal < Propanone < Butanone
The electron density at the carbonyl carbon increases with the increase in the +I effect. As a result, the chances of attack by a nucleophile decrease. Hence, the increasing order of the reactivities of the given carbonyl compounds in nucleophilic addition reactions is:
Butanone < Propanone < Propanal < Ethanal

The + I effect is more in ketone than in aldehyde. Hence, acetophenone is the least reactive in nucleophilic addition reactions. Among aldehydes, the +1 effect is the highest in p-total dehyde because of the presence of the electron-donating -CH3 group and the lowest in p-nitrobenzaldehyde because of the presence of the electron-withdrawing 2 groups. Hence, the increasing order of the reactivities of the given compounds is :
Acetophenone < p – tolualdehyde <Benzaldehyde <p – Nitrobenzaldehyde

Question 5.
Predict the products of the following reactions: Question 7.
Show how each of the following compounds can be converted to benzoic acid.
(i) Ethylbenzene
(ii) Acetophenone
(iii) Bromobenzene
(iv) Phenylethene (Styrene)
Answer: