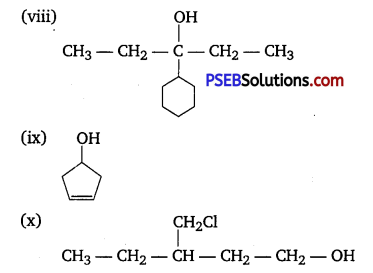 Question 3.
(i) Draw the structures of all isomeric alcohols of molecular formula C5H12O and give their IUPAC names.
(ii) Classify the isomers of alcohols in question 3(i) as primary, secondary, and tertiary alcohols.
Answer:
(i) Eight isomers are possible. These are :

Question 4.
Explain why propanol has higher boiling point than that of the hydrocarbon, butane?
Answer:
Propanol undergoes intermolecular H-bonding because of the presence of -OH group. On the other hand, butane does not.

Therefore, extra energy is required to break hydrogen bonds. For this reason, propanol has a higher boiling point than hydrocarbon butane.

As a result, alcohols are comparatively more soluble in water than hydrocarbons of comparable molecular masses.

The alcohol obtained by this process is contrary to the Markovnikov’s rule.

Question 7.
Give the structures and IUPAC names of monohydric phenols of molecular formula, C7H8O.
Answer:
The three isomers are given as follows :

Question 8.
While separating a mixture of ortho and para-nitrophenols by steam distillation, name the isomer which will be steam volatile. Give reason.
Answer:
o-Nitrophenol is steam volatile as it exists as discrete molecules due to intramolecular H-bonding and hence can be separated by steam distillation from p-nitrophenol which is less volatile as it exists as associated molecules because of intermolecular H-bonding.

Question 9.
Give the equations of reactions for the preparation of phenol from cumene.
Answer:

Question 10.
Write chemical reaction for the preparation of phenol from chlorobenzene.
Answer:
Chlorobenzene is fused with NaOH (at 623 K and 300 atm pressure) to produce sodium phenoxide, which gives phenol on acidification.

Question 12.
You are given benzene, cone. H2SO4 and NaOH. Write the equations for the preparation of phenol using these reagents.
Answer: (ii) When chloro methylcyclohexane is treated with sodium hydroxide, cyclohexyl methanol is obtained.

(iii) When 1-chloromethane is treated with NaOH, pentane-l-ol is produced.

The nitro-group is an electron-withdrawing group. The presence of this group in the ortho position decreases the electron density in the O-H bond. As a result, it is easier to lose a proton. Also, the o-nitro phenoxide ion formed after the loss of protons is stabilized by resonance. Hence, ortho nitrophenol is a stronger acid. On the other hand, methoxy group is an electron-releasing group. Thus, it increases the electron density in the O-H bond and hence, the proton cannot be given out easily. For this reason,ortho-nitrophenol is more acidic than ortho- methoxy phenol.

Question 16.
Explain how does the -OH group attached to a carbon of benzene ring activates it towards electrophilic substitution?
Answer:
Phenol may be regarded as a resonance hybrid of following structures:

Thus, due to +R effect of the -OH group, the electron density in the benzene ring increases thereby facilitating the attack of an electrophile. In other words, presence of -OH group, activates the benzene ring towards electrophilic substitution reactions. Now, since the electron density is relatively higher at the two o-and one p-position, electrophilic substitution occurs mainly at o-and p-positions.

Question 17.
Give equations of the following reactions:
(i) Oxidation of propane-1-ol with alkaline KMnO4 solution.
(ii) Bromine in CS2 with phenol.
(iii) Dilute HNO3 with phenol.
(iv) Treating phenol with chloroform in presence of aqueous NaOH.
Answer: (ii) Reimer-Telemann reaction: When phenol is treated with chloroform (CHCl3 ) in the presence of sodium hydroxide, a -CHO group is introduced at the ortho position of the benzene ring.

This reaction is known as the Reimer-Tiemann reaction. The intermediate is hydrolyzed in the presence of alkalis to produce salicylaldehyde.

This reaction involves SN2 attack of the alkoxide ion on the alkyl halide. Better results are obtained in case of primary alkyl halides.

If the alkyl halide is secondary or tertiary, then elimination competes over substitution.

Step 3 :
Elimination of a proton to form ethene:

The acid consumed in Step 1 is released in Step 3. After the formation of ethene, it is removed to shift the equilibrium in a forward direction.

Question 20.
How are the following conversions carried out?
(i) Propene → Propan-2-ol
(ii) Benzyl chloride → Benzyl alcohol
(iii) Ethyl magnesium chloride → Propan-1-ol.
(iv) Methyl magnesium bromide → 2-Methylpropan-2-ol.
Answer:
(i) If propene is allowed to react with water in the presence of an acid as a catalyst, then propane-2-ol is obtained.

(ii) If benzyl chloride is treated with NaOH (followed by acidification) then benzyl alcohol is produced.

(iii) When ethyl magnesium chloride is treated with methanal, an adduct is produced which gives propane-1-ol on hydrolysis.

(iv) When methyl magnesium bromide is treated with propanone, an adduct is produced which gives 2- methylpropane-2-ol on hydrolysis.

Question 23.
Give IUPAC mimes of the following ethers:

Question 24.
Write the names of reagents and equations for the preparation of the following ethers by WilÌianlÑon’s synthesis:
(i) 1-Propoxypropane
(ii) Ethoxybenzene
(iii) 2.Methoxy-2-methylpropane
(iv) 1 -Methoxyethane
Answer: 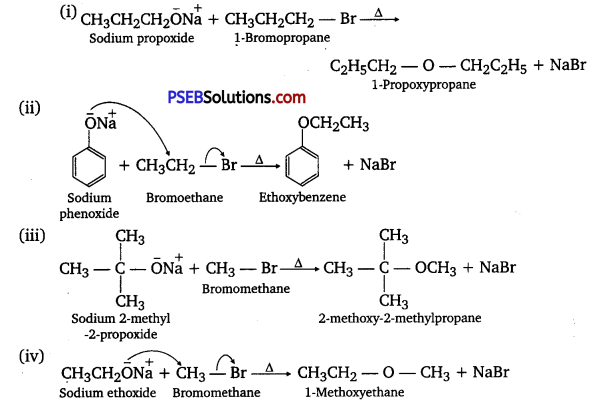 Question 25.
Illustrate with examples the limitations of Willi9mon synthesis for the preparation of certain types of ethers.
Answer:
The reaction of Williamson synthesis involves SN2 attack of an alkoxide ion on a primary alkyl halide.

The mechanism of this reaction involves the following three steps:
Step 1: Protonation

Similarly, tertiary alcohols give alkenes rather than ethers. Question 28.
Write the equation of the reaction of hydrogen iodide with:
(i) 1-propoxy propane
(ii) Methoxybenzene and
(iii) Benzyl ethyl ether
Answer:

(ii) Since the electron density increases more at the two orthos and one para position as compared to meta-positions, electrophilic substitution reactions mainly occur at ortho-and para-positions. For example,

Question 30.
Write the mechanism of the reaction of III with methoxymethane.
Answer:
When equimolar amounts of HI and methoxymethane are taken; a mixture of methyl alcohol and iodomethane are formed.
Mechanism
Step I:

If HI is present in excess, CH3OH formed in step II is further converted into CH3I.

Question 32.
Show ho would you synthesize the following alcohols from appropriate alkenes?

Answer:
The given alcohols can be synthesized by applying Markovnikov’s rule of acid-catalyzed hydration of appropriate alkenes. – 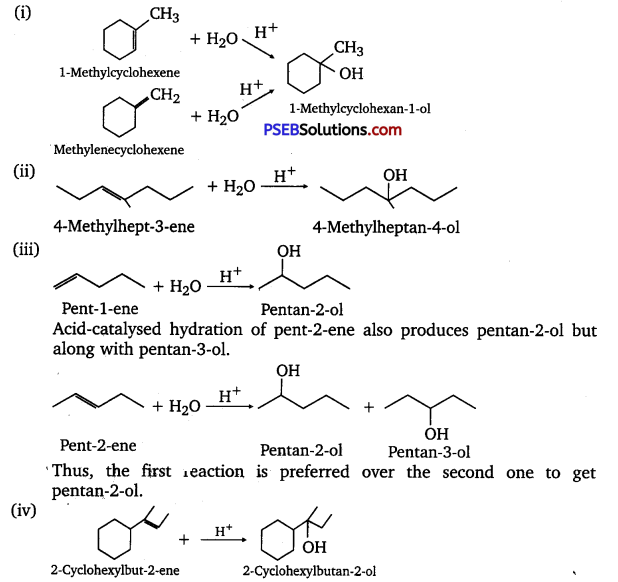 Question 33.
When 3-methyl butan-2-ol is treated with HBr, the following reaction takes place:

Give a mechanism for this reaction.
(Hint: The secondary carbocation formed in step It rearranges to a more stable tertiary carbocation by a hydride ion shift from 3rd carbon atom.)
Answer:
Mechanism: The reaction takes place through the following mechanism :
Step I: Formation of protonated alcohol.

Question 1.
Classify the following as primary, secondary and tertiary alcohols: Question 3.
Name the following compounds according to IUPAC system : 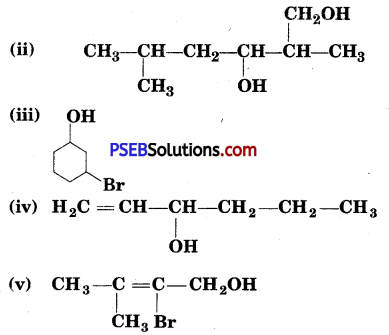 Question 4.
Show how are the following alcohols prepared by the reaction of a suitable Grignard reagent on methanal.

Question 5.
Write structures of the products of the following reactions: 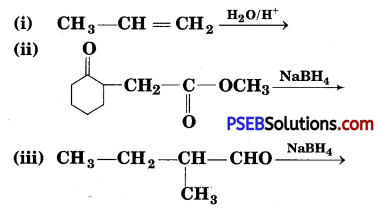 Question 6.
Give structures of the products you would expect when each of the following alcohol reacts with
(a) HCl-ZnCl2
(b) HBr and
(c) SOCl2.
Answer: 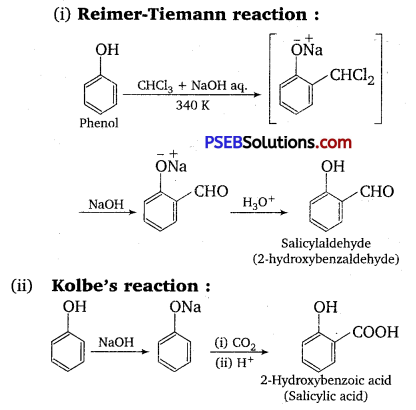 Question 11.
Which of the following is an appropriate set of reactants for the preparation of l-methoxy-4- nitrobenzene and why ?

Answer:
(ii) because inset (i), sodium methoxide (CH3ONa) is a strong nucleophile as well as a strong base. So, elimination reaction predominates over substitution reaction.