(b) Negative
In the given case, the direction of force (vertically downward) and displacement (vertically upward) are opposite to each other. Hence, the sign of work done is negative.

(e) Negative
The resistive force of air acts in the direction opposite to the direction of motion of the pendulum. Hence, the work done is negative in this case. (ii) In the given case, the potential energy (V0) is greater than total energy (E) in all regions. Hence, the particle will not exist in this region.

(iii) In the given case, the condition regarding the positivity of K.E. is satisfied only in the region between x > a and x<b.
The minimum potential energy in this case is -V1. Therefore, K.E. = E-(-V1) = E + V1.
Therefore, for the positivity of the kinetic energy, the total energy of the particle must be greater than -Vj. So, the minimum total energy the particle must have is -V1.

Question 4.
The potential energy function for a particle executing linear simple harmonic motion is given by V (x) = kx2 / 2, where k is the force constant of the oscillator. For k = 0.5 Nm-1, the graph of V (x) versus x is shown in figure below. Show that a particle of total energy 1 J moving under this potential must ‘turn back’ when it reaches x = ±2m.

Question 5.
Answer the following:
(a) The casing of a rocket in flight burns up due to friction. At whose expense is the heat energy required for burning obtained? The rocket or the atmosphere?
(b) Comets move around the sun in highly elliptical orbits. The gravitational force on the comet due to the sun is not normal to the comet’s velocity in general. Yet the work done by the gravitational force over every complete orbit of the comet is zero. Why?
(c) An artificial satellite orbiting the earth in very thin atmosphere loses its energy gradually due to dissipation against atmospheric resistance, however small. Why then does its speed increase progressively as it comes closer and closer to the earth?
(d) In fig. (i) the man walks 2 m carrying a mass of 15 kg on his hands. In fig. (ii), he walks the same distance pulling the rope behind him. The rope goes over a pulley, and a mass of 15 kg hangs at its other end. In which case is the work done greater? Solution:
(a) The burning of the casing of a rocket in flight (due to friction) results in the reduction of the mass of the rocket.
According to the conservation of energy:
Total Energy (T.E.) = Potential energy (P.E.) + Kinetic energy (K.E.)
= mgh + \(\frac{1}{2}\) mυ2
The reduction in the rocket’s mass causes a drop in the total energy. Therefore, the heat energy required for the burning is obtained from the rocket.

(c) When an artificial satellite, orbiting around earth, moves closer to earth, its potential energy decreases because of the reduction in the height. Since the total energy of the system remains constant, the reduction in P.E. results in an increase in K.E. Hence, the velocity of the satellite increases. However, due to atmospheric friction, the total energy of the satellite decreases by a small amount.

Question 6.
Underline the correct alternative:
(a) When a conservative force does positive work on a body, the potential energy of the body increases/decreases/ remains unaltered.
(b) Work done by a body against friction always results in a loss of its kinetic/potential energy.
(c) The rate of change of total momentum of a many-particle system is proportional to the external force/sum of the internal forces on the system.
(d) In an inelastic collision of two bodies, the quantities which do not change after the collision are the total kinetic energy/total linear momentum/total energy of the system of two bodies.
Solution:
(a) Decreases, A conservative force does a positive work on a body when it displaces the body in the direction of force. As a result, the body advances toward the centre of force. It decreases the separation between the two, thereby decreasing the potential energy of the body.

(b) Kinetic energy, The work done against the direction of friction reduces the velocity of a body. Hence, there is a loss of kinetic energy of the body.

Question 7.
State if each of the following statements is true or false. Give reasons for your answer.
(a) In an elastic collision of two bodies, the momentum and energy of each body is conserved.
(b) Total energy of a system is always conserved, no matter what internal and external forces on the body are present.
(c) Work done in the motion of a body over a closed loop is zero for every force in nature.
(d) In an inelastic collision, the final kinetic energy is always less than the initial kinetic energy of the system.
Solution:
(a) False, In an elastic collision, the total energy and momentum of both the bodies, and not of each individual body, is conserved.

(c) False, The work done in the motion of a body over a closed loop is zero for a conservation force only.

(b) Yes, In an elastic collision, the total linear momentum of the system always remains conserved.

(d) Elastic, In the given case, the forces involved are conservation. This is because they depend on the separation between the centres of the billiard balls. Hence, the collision is elastic. Question 14.
A molecule in a gas container hits a horizontal wall with speed 200 m s-1 and angle 30° with the normal, and rebounds with the same speed. Is momentum conserved in the collision? Is the collision elastic or inelastic?
Solution:
Yes; Collision is elastic
The momentum of the gas molecule remains conserved Whether the collision is elastic or inelastic.
The gas molecule moves with a velocity of 200 m/s and strikes the stationary wall of the container, rebounding with the same speed.
It shows that the rebound velocity of the wall remains zero. Hence, the total kinetic energy of the molecule remains conserved during the collision. The given collision is an example of an elastic collision.

Question 16.
Two identical ball bearings in contact with each other and resting on a frictionless table are hit head-on by another ball bearing of the same mass moving initially with a speed V. If the collision is elastic, which of the following figure is a possible result after collision? Question 17.
The bob A of a pendulum released from 30° to the vertical hits another hob B of the same mass at rest on a table as shown in’ figure given below. How high does the bob A rise after the collision? Neglect the size of the bobs and assume the collision to be elastic.

Solution:
Bob A will not rise at all
In an elastic collision between two equal masses in which one is stationary, while the other is moving with some velocity, the stationary mass acquires the same velocity, while the moving mass immediately comes to rest after collision. In this case, a complete transfer of momentum takes place from the moving mass to the stationary mass. Hence, bob A of mass m, after colliding with bob B of equal mass, will come to rest, while bob B will move with the velocity of bob A at the instant of collision.

Question 18.
The bob of a pendulum is released from a horizontal position. If the length of the pendulum is 1.5 m, what is the speed with which the bob arrives at the lowermost-point, given that it dissipated 5% of its initial energy against air resistance?
Solution:
Length of the pendulum, l = 1.5 m
Mass of the bob = m
Energy dissipated = 5%
According to the law of conservation of energy, the total energy of the system remains constant.

Question 19.
A trolley of mass 300 kg carrying a sandbag of 25 kg is moving uniformly with a speed of 27 km/h on a frictionless track. After a while, sand starts leaking out of ahole on the floor of the trolley at the rate of 0.05 kg s-1 . What is the speed of the trolley after the entire sand bag is empty?
Solution:
The sand bag is placed on a trolley that is moving with a uniform speed of 27 km/h. The external forces acting on the system of the sand bag and the trolley is zero. When the sand starts leaking from the bag, there will be no change in the velocity of the trolley. This is because the leaking action does not produce any external force on the system. This is in accordance with Newton’s first law of motion. Hence, die speed of the trolley will remain 27 km/h.

Question 25.
Two inclined frictionless tracks, one gradual and the other steep meet at A from where two stones are allowed to slide down from rest, one on each track (see figure). Will the stones reach the bottom at the same time? Will they reach there with the same speed? Explain. Given θ1 = 30°, θ2 = 60°and h = 10m, what are the speeds and times taken by the two stones? Question 26.
A1 kg block situated on a rough incline is connected to a spring of spring constant 100 Nm-1 as shown in figure given below. The block is released from rest with the spring in the unstretched position. The block moves 10 cm down the incline before coming to rest. Find the coefficient of friction between the block and the incline. Assume that the spring has a negligible mass and the pulley is frictionless.

Question 29.
Which of the following potential energy curves in the given figure cannot possibly describe the elastic collision of two billiard balls? Here r is the distance between centres of the balls. 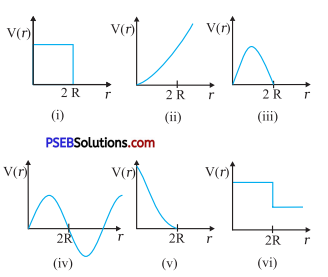 Solution:
(i), (ii), (iii), (iv), and (vi)
The potential energy of a system of two masses is inversely proportional to the separation between them. In the given case, the potential energy of the system of the two balls will decrease as they come closer to each other. It will become zero [i.e., V (r) = 0] when the two balls touch each other, i.e., at r = 2R, where R is the radius of each billiard ball. The potential energy curves given in figures (i), (ii), (iii), (iv), and (vi) do not satisfy these two conditions. Hence, they do not describe the elastic collisions between them.

Question 30.
Consider the decay of a free neutron at rest: n → p + e–. Show that the two-body decay of this type must necessarily give an electron of fixed energy and, therefore, cannot account for the observed continuous energy distribution in the β-decay of a neutron or a nucleus (see figure). Alternate method
Decay of a free neutron at rest,
n → p + e–
Let Δ m be the mass defect during this process.
∴ Mass defect (Δ m) = (Mass of neutron) – (Mass of proton and electron) This mass defect is fixed and hence electron of fixed energy should be produced. Therefore, two-body decay of this type cannot explain the observed continuous energy distribution in the (3-decay of a neutron in a nucleus.