Question 1.
Bodies of larger mass need greater initial effort to put them in motion. Why?
Answer:
According to the Newton’s second law of motion, F = ma, for given acceleration a, if m is large, F should be more i. e., greater force will be required to put a larger mass in motion.

Question 2.
The distance travelled by a moving body is directly proportional to time. Is any external force acting on it?
Solution:
When S ∝ t, so acceleration = 0. Therefore, no external force is acting on the body.

Question 3.
A body is acted upon by a number of external forces. Can it remain at rest?
Answer:
Yes, if the external forces acting on the body can be represented in magnitude and direction by the sides of a closed polygon taken in the same order.

Question 4.
If force is acting on a moving body perpendicular to the direction of motion, then what will be its effect on the speed and direction of the body?
Answer:
No change in speed, but change in direction is possible. Forces acting on a body in circular motion is an example.

Question 7.
The mountain road is generally made winding upwards rather than going straight up. Why?
Solution:
When we go up a mountain, the opposing force of friction
F = μR = μ mg cosθ.
where θ is angle of slope with horizontal. To avoid skidding, F should be large.
∴ cosθ should be large and hence, θ must be small.
Therefore, mountain roads are generally made winding upwards. The road straight up would have large slope.

Question 2.
A light, inextensible string as shown in figure connects two blocks of mass M1 and M2. A force F as shown acts upon M1. Find acceleration of the system and tension in string. Question 5.
When walking on ice, one should take short steps rather than long steps. Why?
Solution:
Let R represent the reaction offered by the ground. The vertical component R cosθ will balance the weight of the person and the horizontal component R sinθ will help the person to walk forward. Question 6.
A body of mass m is suspended by two strings making angles α and β with the horizontal as shown in fig. Calculate the tensions in the two strings. 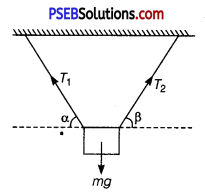 Question 8.
A block slides down from top of a smooth inclined plane of elevation θ fixed in an elevator going up with an acceleration a0. The base of incline has length L. Find the time taken by the block to reach the bottom. Solution:
The free body force diagram is shown. The forces are
(i) N normal to the plane (ii) mg acting vertically down (iii) ma0 (pseudo-force).