Question 5.
What is a mesosome in a prokaryotic cell? Mention the functions that it performs.
Answer:
Mesosome is a special membrane structure which is formed by the extension of the plasma membrane into the cell in a prokaryotic cell. It helps in cell wall formation, DNA replication and distribution to daughter cells. It also helps in respiration, secretion possesses to increase the surface area of the plasma membrane and enzymatic content.

(ii) Each mitochondrion is a double membrane bound structure.

(iii) The inner compartment is called the matrix. The outer membrane of mitochondria forms the continuous limiting boundary of the organelle.

(iv) The inner membrane forms a number of infoldings called the cristae (single crista) towards the matrix. The cristae increase the surface area.

(v) The two membranes have their own specific enzymes associated with the mitochondrial function. The matrix of mitochondria also possess single circular DNA molecule, a few RNA molecules, ribosomes (70 s) and the components required for the synthesis of proteins.

Functions of Mitochondira: Mitochondria are the sites of aerobic respiration. They produce cellular energy in the form of ATP hence they are known as power house of the cell. 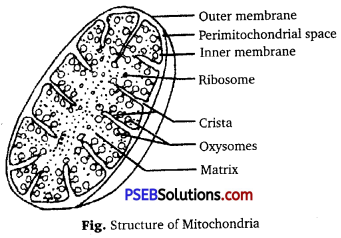 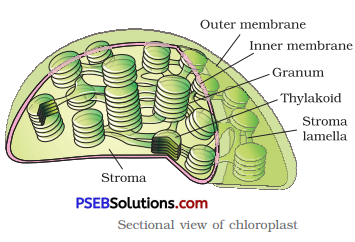 Functions of chloroplasts: The chloroplasts contain chlorophyll and carotenoid pigments which are responsible for trapping light energy essential for photosynthesis.

Question 10.
Cell is the basic unit of life. Discuss in brief.
Answer:
All organisms begin their life in a single cell. Certain organisms complete their life cycle as a single cell. They are called unicellular or acellular organisms, e.g., Amoeba, Chlamydomonas, bacteria and yeast. In other organisms, the, single cell undergoes divisions to form multicellular body. Body of human being, is made up of trillion of cells. All the cells of an organism carry the same genetic material, develop from same pre-existing cells and possess several organelles to perform various life activities. The cells are therefore, basic unit of life and structural unit of an organism.

Question 11.
What are nuclear pores? State their function.
Answer:
Nuclear pores are. small apertures present in the nuclear membrane.
Functions of Nuclear Pores: Nuclear pores are highly selective in their permeation. They allow outward passage of newly formed ribosome units but prevent the entry of active ribosomes. Proteins synthesised in the cytoplasm enter the nuclear through nuclear pores but ions like K+ Na+ or Cl– may not be able to gain entrance.

Question 12.
Both lysosomes and vacuoles are endomembrane structures, yet they differ in terms of their functions. Comment.
Answer:
Both lysosomes and vacuoles are covered by a single membrane. Both of them perform different types of functions. Lysosomes contain hydrolysing enzymes and can hydrolyse all types of organic substances, – except cellulose. They perform phagocytic function. Therefore, they are known as suicidal bags.

The vacuoles are non-cytoplasmic sacs which, are also covered by a membrane. The sap vacuoles store sap or water with dissolved organic and inorganic substances. They maintain osmotic pressure or turgidity. Some freshwater invertebrates such as Amoeba, Paramecium occur contractile vacuoles, which perform osmoregulation and excretion. There is another type of vacuoles such as food vacuole which store food and gas vacuoles which store metabolic gases and take part in buoyancy regulation.

Thus, both lysosomes and vacuoles differ from each other in the type of functions they perform.

Question 13.
Describe the structure of the following with the help of labelled diagrams:
(i) Nucleus
(ii) Centrosome
Answer:
(i) Nucleus: It is a double membrane bounded protoplasmic body that carries hereditary information. Chemically it contains DNA, basic proteins, non-basic proteins, RNA, lipids and minerals, etc.
(a) Nuclear envelope: It is made up of two nuclear membranes separated by 10-70 nm perinuclear space. The outer membrane is rough due to the presence of ribosomes. Nuclear envelope has many pores with diameter
200-800 Å.

(b) Nucleoplasm or nuclear matrix: It is a colloidal complex that fills the nucleus. Nucleoplasm contains raw material for synthesis of DNA and RNA

(c) Chromatin: It is a fibrous hereditary material formed by DNA-histone complex. Some non-histone proteins and also RNA.- A single human cell has about 2 metre long thread of DNA distributed among its 46 chromosomes.

(d) Nucleolus: It was originally discovered by Fontana (1781) and given the present name by Bowman (1840). It is naked roughly rounded darkly stained structure that ‘ is attached to chromatin at specific spot called Nucleolar Organiser Region (NOR). Nucleolus is the site for eLaboration of rRNA and synthesis of ribosomes. It is therefore, known as ribosomal factory. 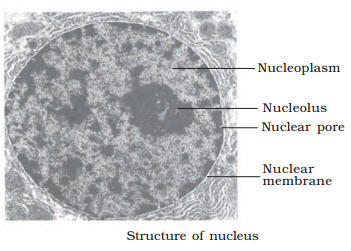 Centrosome: It is an organelle usually containing two cylindrical structure called centrioles. They are surrounded by amorphous pericentriolar materials. Both the centrioles in a centrosome lie perpendicular to each other in which
each his an organisation like the cartwheel.

They are made up of nine evenly spaced peripheral fibrils of tubulin protein the central part of the proximal region of centriole is called hub, which is connected with tubules of the peripheral triplet by radial spokes made of protein. The centriole form the basal bodies of cilia or flagella and spindle fibres that give rise to spindle apparatus during cell division in animal life. 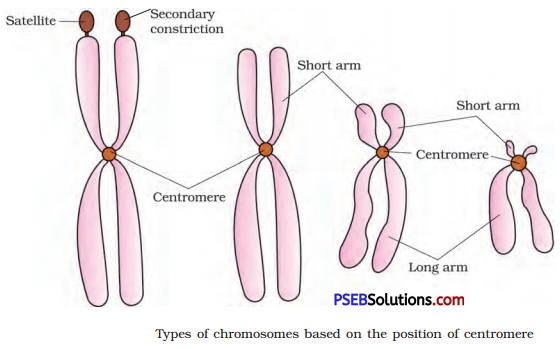