Development: It is the process of whole series of changes which an organism goes through during its life cycle.
Meristem: The cells of which the capacity to divide and self-perpetuate.

Growth Rate: The increased growth per unit time is termed as growth rate. Thus, rate of growth can be expressed mathematically. An organism or a part of the organism can produce more cells in a variety of ways. The growth rate shows an increase that may be arithmetic or geometrical.

Differentiation: The cells derived from root apical and shoot-apical meristems and cambium differentiate and mature to perform specific functions. This act leading to maturation is termed as differentiation.

Question 3.
Describe briefly:
(a) Arithmetic growth
(b) Geometric growth
(c) Sigmoid growth curve
(d) Absolute and relative growth rates
Answer:
(a) Arithmetic Growth: In arithmetic growth, following mitotic cell division only One daughter cell continues to divide while the other differentiates and matures. Example is a root elongating at a constant rate.

(b) Geometric Growth: In geometrical growth, in most systems, the initial growth is Size of slow (lag phase), and it organ increases rapidly thereafter at an exponential rate (log or exponential phase). Here, both the progeny cells following mitotic cell division retain the ability to divide and continue to do so. 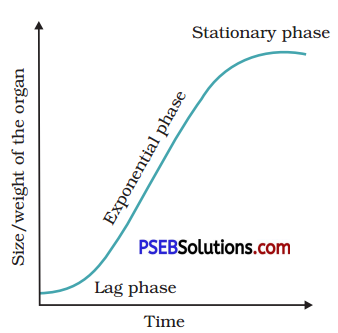 (c) Sigmoid Growth Curve: If we plot the parameter of growth against time, we get a typical sigmoid or S-curve. A sigmoid curve is a characteristic of living organism growing in a natural environment. It is typical for all cells, tissues and organs of a plant.

Question 4.
List five main groups of natural plant growth regulators. Write a note on discovery, physiological functions, and agricultural/ horticultural applications of any one of them.
Answer:
Five main groups of natural plant growth regulators are auxins, gibberellins, ethylene, cytokinins and abscisic acid.
Auxins
(i) Discovery: Auxins was first isolated from human urine. They are generally produced by the growing apices of the stems and roots. Auxins like IAA (indole acetic acid) and indole butyric acid (IBA) have been isolated from plants. NAA (naphthalene acetic acid) and 2, 4-D (2, 4-dichloro phenoxy acetic) are synthetic auxins.

(ii) Physiological Function: They help to initiate rooting in stem cuttings, an application widely used for plant propagation. Auxins promote flowering, i. e., in pineapples. They help to prevent fruit and leaf drop at early stages but promote the abscission of older mature leaves and fruits.

Question 5.
What do you understand by photoperiodism and vernalization? Describe their significance.
Answer:
1. Photoperiodism: The response of plants to periods of day/night is termed as photoperiodism. The site of perception of light/dark duration are the leaves.

Significance: The significance of photoperiodism is in regulating flowering in plants. Flowering is an important step towards seed formation and seeds are responsible for continuing the generation of a plant.

Significance: Vernalisation prevents precocious reproductive development late in the growing season. This enables the plant to have sufficient time to reach maturity.

Question 6.
Why is abscisic acid also known as stress hormone?
Answer:
Abscisic acid acts as a general plant growth inhibitor and an inhibitor of plant metabolism. ABA inhibits seed germination. ABA stimulates the closure of stomata in the epidermis and increases the tolerance of plants to various kinds of stresses. Therefore, it is also called the stress hormone.

Question 7.
‘Both growth and differentiation in higher plants are open Comments.
Answer:
Plant growth is unique because plants retain the capacity for unlimited growth throughout their life. This ability of the plants is due to the presence of meristems at certain locations in their body. The cells of such meristems have the capacity to divide and self-perpetuate. The product, however, soon loses the capacity to divide and such cells make up the plant body. This form of growth wherein new cells are always being added to the plant body by the activity of the meristem is called the open form of growth.

Question 8.
‘Both a short day plant and a long day plant can produce flower simultaneously in a given place’. Explain.
Answer:
Petkus winter rye (Secale cereal) gives responses of low temperature at very young seedlings or even at seed stage. If winter rye is shown in the spring, the seeds germinate and produce vegetative plants in the following summer. In this case, the period of vegetative growth is extended and flowering occurs only in the next summer when the cold requirements is fulfilled during winters. The same variety, if grown in early autumn produces flowers in the following summer.

Question 9.
Which one of the plant growth regulators would you use if you are asked to:
(a) induce rooting in a twig
(b) quickly ripen a fruit.
(c) delay leaf senescence
(d) induce growth in axillary buds
(e) ‘bolt’ a rosette plant
(f) induce immediate stomatal closure in leaves.
Answer:
(a) Cytokinins
(b) Ethylene
(c) Cytokinins
(d) Auxin
(e) Gibberellins
(f) Abscisic acid.

Question 11.
What would be expected to happen if:
(a) GA3 is applied to rice seedlings.
(b) dividing cells stop differentiating.
(c) a rotten fruit gets mixed with unripe fruits.
(d) you forget to add cytokinin to the culture medium.
Answer:
(a) The rice seedlings show extraordinary elongation of stem and leaf sheaths.
(b) Tissue and organ differentiation will not take place.
(c) Unripe fruits will also get rotten due to the ethylene hormone secreted by rotten fruit.
(d) No root and shoot formation will take place.