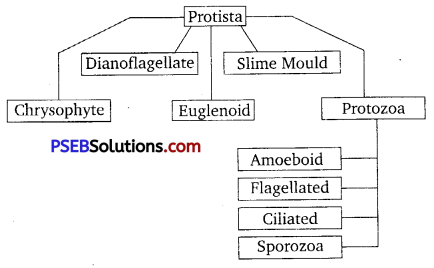 Question 5.
Write a note on economic importance of algae and gymnosperms.
Answer:
Economic Importance of Algae

Question 7.
What is heterospory? Briefly comment on its significance. Give two examples.
Answer:
Heterospory is the phenomenon in which a plant produces two types of spores, namely microspores and megaspores.
Heterospory is significant in the following ways:

Question 8.
Explain briefly the following terms with suitable examples:
(i) Protonema
(ii) Antheridium
(iii) Archegonium
(iv) Diplontic
(v) Sporophyll
(vi) Isogamy.
Answer:
(i) Protonema: It is the juvenile stage of a moss. It results from the germinating meiospore. When fully grown, it consists of a slender green, branching system of filaments called the protonema.

(ii) Antheridium: The male sex organ of bryophyte and pteridophyte is known as antheridium. It has a single-layered sterile jacket enclosing in a large number of androcytes. The androcytes’ metamorphose into flagellated motile antherozoids.

(iv) Diplontic: A kind of life cycle in which the sporophyte is the dominant, photosynthetic, independent phase of the plant and alternate with haploid gametophytic phase is known as diplontic life cycle.

(v) Sporophyll: The sporangium bearing structure in case of Selaginella is known as sporophyll.

(vi) Isogamy: It is the process of fusion between two similar gametes, i.e., Chlamydomonas.

(ii) Differences between Liverworts and Moss

Question 10.
How would you distinguish monocots from dicots?
Answer:

Question 11.
Match the followings (column I with column II)