Question 1.
Give an introduction to the Handball game?
Answer:
Handball-An Introduction:
Handball is a team sport. Two teams participate in this game. Each team has 12 players, out of which 10 are court players and 2 are goal-keepers. Not more than 7 players enter the court at a tinine. Out of these 7, 6 are court players and 1 is a goal-keeper. The remaining 5 players are substitutes. A player may be included in a game or a substitute may be allowed for him. No one else but a goal keeper is allowed in the goal area.

The game starts in the middle of the court as soon as the referee whistles for a throw-on. The duration of the game for men is 30-10-30 minutes, while for women it is 25-10-25 minutes.

Each team tries to put the handball into the goal of the rival team, and tries to defend its own goal against the rival attacks. The ball is played by hands, but it can be touched by knees or any other part of the body. Only a goal-keeper can touch the ball by all parts of his body. A player can be substituted any time during the play. There is no time out in this game.

The players, running, walking or standing, can toss the ball with single hand. A player with a ball can move forward, but he cannot move more than three steps. A ball can be held for three seconds at the most. If a player gets hint, the game can be stopped on the referee’s orders, and the substitute enters the court in case of need. The weight of the ball for men is 475 gms. and for women, it is 425 gms. The circumference of the handball is from 58 to 60 cms.

After a goal has been scored, the game shall re-start from the middle of the court with a throw-on. The throw-on-shall be done by that player against whom a goal has been scored. If the ball goes out during the play, the rival team gets a throw from that place. After half-time the goal and throw-on shall be changed.

A team that scores more goals is declared the winner. If the number of goals scored by both the teams is equal or if no goal is scored, the match shall end in a draw. Each game shall be conducted by two referees who are assisted by a scorer and a time-keeper. Referees enforce the rules of the game. Referees are the managers of the match from the start to the finish.

Question 2.
Mention the Play ground, Goal, Ball, Players, Duration of the game, Goal area, Score, Throw-in, Comer throw, Goal throw, Free throw and Penalty throw in the game of Handball.
Answer:
Playground:
The playground is divided into two circular areas, The court of the game is rectangular with a length of 40 metres and width of 20 metres. The thickness of each line is 0.5 cm. The height of the poles is 7 feet, while their width is 3 metres. A‘D’ is marked 6 metres in front of the poles. The penalty area is 7 metres away from poles. In special circumstances, the play area may be 38-44 metres in length and 18-22 metres in width. 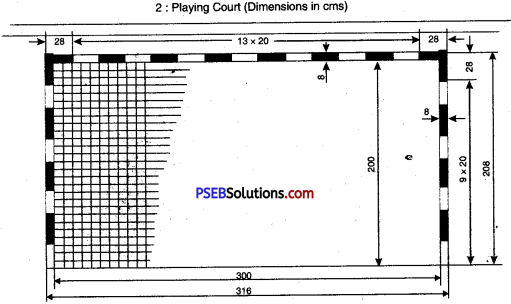 Goals:
Goals shall be in the centre of goal lines. There shall be two straight poles in each goal parallel to and at an equal distance from the corners of the playfield. The poles shall be 3 metres from each other and 2 metres in height. They shall be firmly planted in the ground, and linked properly with each other with a horizontal cross-bar. The outer end of the goal line and the back end of the goal post shall be in one line.

Poles and cross-bar shall be square and of the size of 8 × 8 cms. They shall be made of wood, light metal and synthetic material. They shall have two colours on all sides and shall be distinctly different from the background.

Each goal shall be marked with a line of 3 metres, 6 metres from goal area and parallel to the goal line. The ends of this line shall be linked by quarter circles to goal line. The circumference of these circles shall be 6 metres from the back of the inner cover of goal poles. This line is called goal-area-line. Penalty line is marked at a distance of 7 metres, from the centre of goal post, and the second free throw line at a distance of 9 m.

Duration of Game:
The duration of the game for men is 30-10-30 minutes, while for women it is 25-10-25 minutes. There is no time out in the game. The referee can take official time-out, if needed.

Note:
In tournaments, the game is played into two durations of 30 minutes each with no interval. 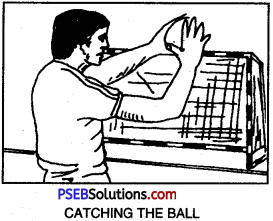 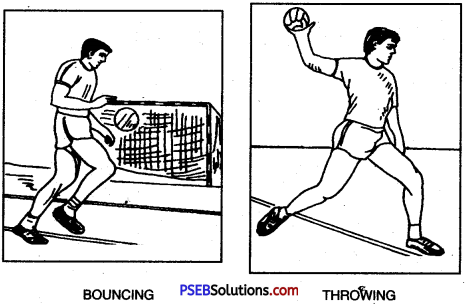 For women and juniors, the game is divided into two durations of 25 minutes each with an interval of 10 minutes.

Goal:
A goal cannot be scored against the rivals by a direct throw-on.

Playing the Ball:
The following methods of play are allowed:

Blocking the ball, catching, throwing, tossing or hitting it in any way or direction (with palms or flat hands) by using arms, head, body, knees etc are valid.

When the ball lies on the ground, it can be held for three seconds at the most. To walk with the ball for three steps is valid. Scoring:
A goal is considered to have been scored when the hall passes through the goal line of the rivals through the goal posts under the cross bars, provided the scorer or any player of his team has not violated the rules.

Corner-throw:
When the ball passes the goal line outside the goal by the player of the defending team when touched for the last time, the attacking team is awarded a corner throw. This rule is not applicable on the goal-keeper in his own goal area. Within 3 seconds of the court referee’s whistle the corner throw shall be taken from the same point of the goal side where the touch line and goal line meet each other, and from where the ball has gone out. The players of the defending team can take positions along the goal area line.

Free-throw:
Free-throw is awarded in the following circumstances: 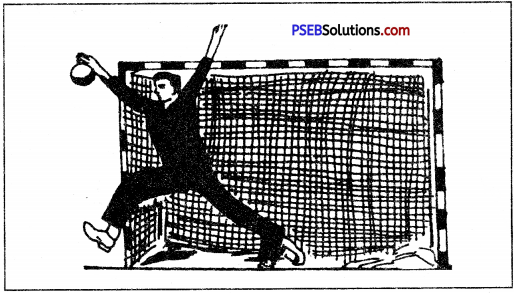 Decision:
The team that scores more goals is declared the winner. Important Information About the Handball Game