Question 1.
Write down about the plateform, dress and duration of GATTKA.
Answer:

2. Player bearing A will,play against the name of A in a bout.

3. In those competitions in which there are more than four competitors a different number shall be drawn in the first series to reduce the number of competitors in the second series.

5. No player can receive a bye in the first series and a walkover in the second or two consecutive walk overs. In case such a position arises a fresh draw shall be made of the competitors still in the competition to provide opponents to those competitors who have already received bye walk over in the preceeding series. 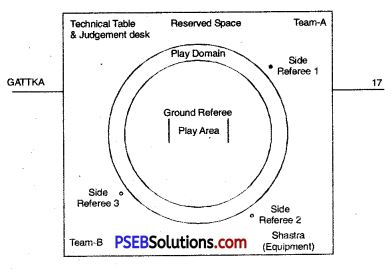 Question 3.
Draw the table of Drawing bout and Byes of Twenty Teams Question 4.
Write about the competition of Gattka.
Answer:
Competitions of Gattka-

1. Limitations of Competitors:
Only five competitors are allowed to participate in a competition

2. First Draw:
If two members of the same team are being drawn together in a series and if one of them wishes to withdraw in favour of the other, a fresh draw will be made

3. Withdrawal:
If a competitor wants to withdraw from the competition after the draw has been made the official-in-charge will report to the organiser.

4. Retirement:
If any competitor wants to retire from the competition due to any reason, he will have to-inform the official-in-charge.

5. Byes:
Byes that arrive after the first series shall be spared for specified time with an opponent approved by the official-in-charge.

Question 5.
Who control the bout of Gattka?
Answer:
Bout Control:

2. The time keeper shall be seated on one side of the plateform while the Judges on the remaining three sides. The seats shall be replaced as to offer a satisfactory view of bouts.

Question 6.
How the points are awarded in Gattka?
Answer:
Awarding of Points:

SCORING:
1. The competitor who strikes his opponent the greater number of touch with Gattka he will get the same number of points his touching on the head is awarded two points.

Suspected foul: If the referee suspects that foul which he has not seen clearly soon he can consult the Judges and give the decision accordingly.

Important Information about the Gattka Game