Question 1.
Which type of competitions (according to weight) are held in Boxing.
Answer:
WEIGHT CLASSIFICATION IN BOXING

Rope:
The ring shall be formed by 2 or 3 sets of ropes covered with linen or with some soft material.

Platform:
The platform shall be erected in a way that it is totally safe, levelled and free from any obstructing projection. It will be constructed on lines of at least 18 inch ropes. It shall have four comer posts constructed in a manner as to prevent any injury.

Under-cover:
The floor shall be covered with an under-cover over which canvas shall be stretched.

Gloves:
The gloves shall be of standard weight. Each glove shall weigh 8 ounces (227 gms.)

Duration of the Game:
The number and duration of rounds for Senior and Junior competitions shall be as under:

Senior National Level
3-1-3-1-3 – Three rounds of three minutes each after one minute rest in each bout.

Junior National Level
2-1-2-1-2 – Three rounds of two minutes each, one minute rest between each bout.

1. A draw shall be made for all competitions after taking of weight and doing medical inspection.

2. In those competitions in which there are more than 4 competitors, a sufficient number of byes shall be drawn in the first series to reduce the number of competitors in the second series. 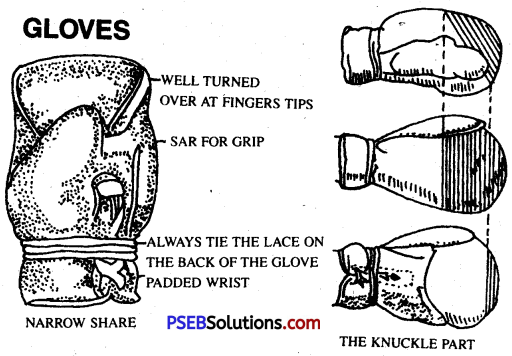 Question 5.
Describe any Five Rules in Boxing?
Answer:
Competitions on Boxing
Limitation of Competitors. Only 4 to 8 competitors are allowed to participate in a competition. This rule does not apply to any championship organised by the Association. The club organising the competition has the right to nominate one of its members to compete provided that member does not participate in the competition. Fresh Draw:
If two members of the same club are being drawn together in a series, and if one of them wishes to withdraw in favour of the other, a fresh draw will be made.

Withdrawal:
If a competitor wants to withdraw from the competition after the draw has been made, the official-in-charge will report to the Association.

Retirement:
If any competitor wants to retire from the competition due to any reason, he will have to inform the official-in-charge.

Byes:
Byes that arise after the first series shall be spared for specified time with an opponent approved by the official-in-charge.

Second:
Each competitor is attended by one second. No advice or coaching can be given to a competitor by his second during the progress of a round. But after the round is over, the assistance of the second can be taken for a second within the ring, and the other second can provide the competitor water and other essential items from the outside. 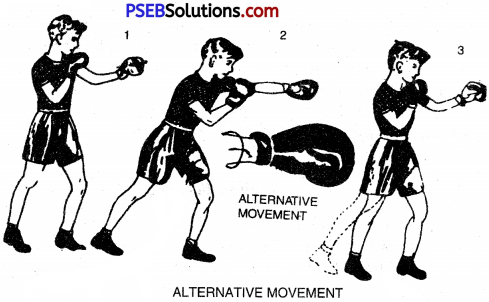 Only Water Allowed:
No drink other than water can be given to the competitor immediately prior to or during a bout.

(2) The referee shall use a score pad or introduction slip to record the names and colours of the boxers. In all such cases in which a bout is terminated due to injury or other cause, the Referee shall record the reason thereof, and hand it over to the official-in-charge.

(3) The time-keeper shall be seated on one side of the ring while the Judges on the remaining three sides. The seats shall be so placed as to offer a satisfactory view of boxing. The Referee shall be solely responsible for the control of the bout, and the judges shall independently award points.

(4) The Referee shall be dressed in white at all major tournaments.

Question 6.
How are bouts conducted in Boxing?
Answer:
Awarding of Points

The judge’s name shall be written in Block Letters as well as signed on all the scoring slips.

2. When the judge observes that both the boxers have struck equal number of blows, he awards 20 points to each.

The above rule is governed by the following definitions:

(A) Scoring Blows:
Blows struck with the knuckle part of the glove on the front or sides of the head or body above the belt.

(C) Leading-off:
Leading-off means striking first, or attempting to strike first. Any infringement of the rules nullifies the scoring value of a leading-off move.

Fouls:
The decision of the judges or the referee in respect of fouls is final. The referee has the power to caution, warn or disqualify for any of the following acts:

The Break:
When a referee asks the two boxers to break, both of them must step one pace before recommencing the play. A boxer is not allowed to strike his rival on the “break”.

Down and Count:
A boxer is deemed to be down when any part of his body except his feet touches the ground, or when he is outside or partly outside the ropes, or hangs hopelessly on the ropes.

Stopping the Bout:
1. When a referee is of the opinion that a boxer, due to some injury, cannot continue the game, he stops the bout. In such a case, the rival player is declared the winner. The decision to stop the bout in such a case rests with the referee who can seek medical advice, if needed.

2. The referee has the right to stop the bout if he believes that the rival has got defeated or he is unable to continue the play. Failure to resume Bout. In all bouts, any boxer who fails to resume the fight, when there is time, loses the bout.

Suspected Foul:
If the refree suspects the foul which he has not clearly seen, he can consult the judges and give the decision accordingly.

Important Information About the Boxing Game