Question 1.
What do you know about the Badminton Court, Poles, Net and Shuttle Cock?
Answer:
Badminton Court. Badminton is of two types – Singles and Doubles. The measurement of the court for both these games shall be well marked by white or red lines 1″ × 2″ (5 cm) wide as shown in the diagram. 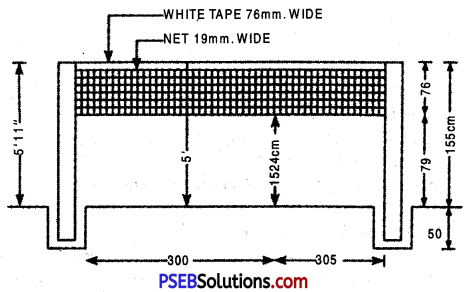 Net:
The net shall be made of fine coloured cord. Its mesh shall be 3.3″ Its breadth should be 2′ – 6″ (0.76 metre). The top of the net should be 5″ from the ground and 5′ – 1″ high from the poles. It shall be firmly tied to the poles on both the sides. Its length should be such that it should extend in both sides of the boundary lines. There should be a double white tape of 3″ on the edges. A cord or’cable runs through the tape which is used to keep the net strained.

When the game is set the score is 0-0 (Love-all). On the game being set, the team that first score 17 points shall be the winner. When the score has reached 14-all the claim to set the game must be made in every case before the next service is delivered. In the game of 11 points the game should be set at 14.

Changing Sides:
The two teams shall play three games according to pre-agreement. The team which wins two out of 3 games shall be declared the winner. The players shall change ends at the end of the first game and before the start of the second game, and in case the third game is to be played, the ends shall be changed. In the third game the players shall change ends.

Doubles and Singles Games in Badminton.

(i) Doubles:
In this game, there are two players on each side. After having been decided which side is to deliver the service first, the player in the right hand service court of that side shall start the game. He shall serve to the opposing player in the right hand service court. This matter is decided by the toss winners, and the other matters by the losing one. It is decided before hand whether the game shall have 15. If the opponent returns the shuttle before it touches the ground to the player who started the game, he shall again return it to the latter.

In the beginning of each game, each team shall deliver the service from the right hand service court.

(ii) Both the players change service courts after each has scored 1 point.

(a) When the struck or served shuttle is higher than the server’s waist or it is struck by the shaft of the racket higher than the server’s hand holding the racket.
(b) When in serving, the shuttle falls into the wrong service court or falls short of the short service line or beyond the long service line or outside the side boundary fine.
(c) When serving, the player’s feet are not in the service court.
(d) When before or during service any player intentionally obstructs his opponents.
(e) When in service, the shuttle falls outside the boundary of the court, passes through under the net, fails to pass the net, or touches the person or dress of a player.
(f) If the shuttle is struck before it crosses the striker’s side of the net.
(g) When the shuttle is in play, a player touches the net or it supports with his body, racket or dress.
(h) When the shuttle is held on the racket, a player strikes it twice in succession or it is struck twice in succession by the player first and then by his partner.
(i) The opponent shall be reckoned as ready if in play he returns the shuttle or tries to hit it, whether he is in or outside the boundary.
(j) When a player obstructs an opponent. (i) Only that player shall receive the service who is served to. If the shuttle touches the other player or is hit by him, the one who delivers service gets 1 point. No player can receive two consecutive services in the same game.

(iii) If a player serves from the wrong service court or serves out of turn and scores the point it shall be called ‘Let’. But this ‘Let’ should be claimed before the next service is delivered.

Question 2.
Discuss the main rules of the game of Badminton?
Answer:
General Rules of Badminton

(ii) The service cannot be delivered until the opposing player is ready.

(iv) Both, the server and the player served to, shall stand within the limits of their own courts. Some parts of both the feet of the players shall remain in contact with the ground until the service is delivered.

(v) If the service delivered is correct but the shuttle touches the net, the player shall be out. But in such a case, it shall not be deemed a fault. If the shuttle falls somehow inside the boundary of the opponent’s court by passing through the poles, it shall be considered a good service. If there is a sudden or indefinite obstruction in the game, the referee can say ‘Let’.

(vi) If a player serves from the wrong service court out of turn and wins a point, the service shall be called ‘Let’. But the condition is that it should be claimed by the other side before the next service is delivered, and it is granted.

(vii) If a player serves from outside his service court and wins the point, the service shall be called ‘Let’ provided the ‘Let’ is claimed before the next service is delivered.

(viii) If in service the shuttle falls beside the net, the service shall be called ‘short’, and the opposing team is awarded service or point.

FOULS PLAY:
Referee or umpire will control the match of tournament by using the yellow and red cards.

YELLOW CARD:
Warning to a player or coach for their misconduct or unsportsman behaviour.

RED CARD:
Suspension for the match or for the tournament.

Important Information About the Badminton Game