Question 1.
Compare the properties of electron, proton and neutron.
Answer:

Question 5.
Compare all the proposed models of atom given in the chapter 3 of the text.
Answer:
Comparing Thomson’s model, Rutherford’s model and Bohr’s model of atom.
A. Thomson’s model of atom.
1. According to Thomson, an atom may be regarded, a uniform sphere of positive electricity (protons) in which negatively charged electrons are embedded like the seeds in a watermelon.

2. The total positive charge is equal to the total negative charge on all the electrons so that atoms on the whole is electrically neutral.

C. Bohr’s model of atom. Described in given above.

Question 6.
Summarize the rules for writing of distribution of electrons in various shells for the first eighteen elements.
Answer:
The various rules for writing the electronic configuration of first elements are:
1. The energy levels or energy shells are filled in order of increasing energies. The electrons first enter the K shell (n =

Question 11.
The average atomic mass of a sample of an element X is 16.2 u, what are the percentages of isotopes g X and “X in the sample?
Answer: 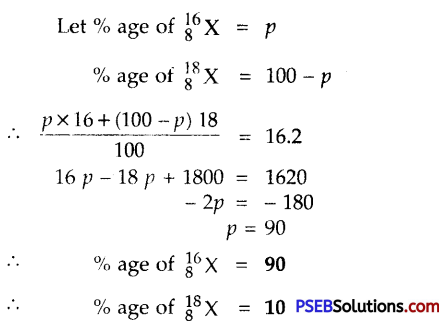 Question 13.
Composition of the nuclei of two atomic species X and Y are given as under:

Give the mass numbers of X and Y. What is the relation between the two species?
Answer:

Question 14.
For the following statements write T for True and F for False.
(a) J.J. Thomson proposed that the nucleus of an atom contains only nucleons.
(b) A neutron is formed by an electron and a proton combining together. Therefore, it is neutral.
(c) The mass of an electron is about 1/2000 times that of proton.
(d) Isotope of iodine is used for making tincture iodine, which is used as a medicine.
Answer:
(a) F
(b) F
(c) T
(d) F.

Question 1.
What are canal rays?
Answer:
A beam of rays or stream of particles which travel in a direction away from anode, towards cathode, when any gas taken in a discharge tube is subjected to the action of high voltage under low pressure are called canal rays.

Question 3.
On the basis of Thomson’s model of an atom explain how the atom is neutral as a whole.
Answer:
Thomson’s model of atom.
1. According to Thomson, an atom may be regarded as a uniform sphere of positive electricity (protons) in which negatively charged electrons are embedded like the seeds in a watermelon.

2. The total positive charge is equal to the total negative charge on all the electrons so that atoms on the whole is electrically neutral.

Question 4.
On the basis of Rutherford’s model of an atom which sub-atomic particle is present in the molecule of an atom?
Answer:
Proton.

Question 5.
Draw a sketch of Bohr’s model of an atom with three shells.
Answer:

Question 6.
What do you think would be the observation if the ∝-particle scattering experiment is carried out using a foil of metal other than gold?
Answer:
Almost all the ∝-particles will pass undeflected and hardly any a-particle is deflected.

Question 7.
Name the three sub-atomic particles of an atom.
Answer:
These are:
(a) Electron
(b) Proton and
(c) Neutron

Question 9.
Write the distribution of electrons in carbon and sodium atoms.
Answer:

Question 10.
If K and L shell of an atom are full then what would be the total number of electrons in it?
Answer:

Question 13.
With the help of table 4.1 (given in Text Book) find out the mass number of oxygen and sulphur atom.
Answer:

Question 14.
For the symbols H, D and T tabulate three fundamental particles found in each of them.
Answer:

Question 15.
Write the electronic configuration of any one pair of isotopes and isobars.
Answer: