Question 1.
Describe the structure of the plant cell.
Answer:
A generalized plant cell consists of three distinct parts viz, cell wall, cell membrane or plasma membrane and protoplasm.
1. Cell wall. It is the outermost covering of a cell made up of a non-living substance called cellulose. Is is permeable. It provides shape, strength and protection to cell.

2. Cell membrane or Plasma membrane. It is thin, delicate and elastic protoplasmic covering lying internal to the cell wall. The plasma membrane controls the entrance and exit of molecules and ions.

3. Cytoplasm. It consists of a number of living and non-living structures. The living structures are called cytoplasmic organelles or cell organelles and include structures like endoplasmic reticulum, ribosomes, golgi apparatus, mitochondria, lysosomes, plastids, vacuoles etc.
(a) Plastids. Plastids are spherical or discoid bodies containing different types of pigments in them. They are of three types viz. chloroplasts, chromoplasts and leucoplasts. The chloroplasts contain a green pigment in them, called chlorophyll. They play a vital role in the process of photosynthesis. The chromoplasts contain pigments other than chlorophyll. They impart various colours to flowers and fruits. Leucoplasts are colourless plastids. They are concerned with the storage of starch.
(b) Mitochondria are power house of cell.
(c) Ribosomes are of 70 S type. They are site for protein synthesis.
(d) Endoplasmic reticulum is network of membranes.
(e) Vacuoles. These are fluid-filled bubble-like structures bounded by a membrane, called tonoplast. They are mostly found in plant cell. Vacuoles provide turgidity and rigidity to cell.

4. Nucleus. It is a dense spherical body bounded by a membrane, called nuclear membrane. Embedded within the nuclear sap are found a number of thread-like structures called chromosomes with genes on them. The nucleus controls the various metabolic activities of the cell. Question 3.
Describe the structure of nucleus. Write its functions.
Answer:
A true nucleus is present in all the eukaryotic cells except mammalian RBCs, sieve tube cells, tracheids and vessels. It directs life processes of cells. It is formed of four components:
(a) Nuclear membrane. It is a two-layered envelope around the nuclear sap. It is porous (with nuclear pores) and semipermeable membrane. Outer membrane is studded with ribosomes and may be continuous with RER. It regulates exchange of materials between nucleoplasm and cytoplasm. (b) Nucleoplasm. It is a semifluid colloidal substance in which nucleoli and chromatin fibres are present.
(c) Nucleolus. It is dense, spherical, naked and darkly stained structure and is the site of formation and storehouse of rRNAs.
(d) Ovomatin fibres. These are long, fine and darkly stained threads which collectively form nuclear reticulum. During prophase of mitosis and meiosis, these condense to form a species-specific number of rods, called chromosomes. These are with genes which are chemically formed of DNA and act as units of heredity and variations.
Functions of the nucleus:
The nucleus performs the following important functions:

Question 4.
Write short notes on:
(a) Chloroplast
(b) Endoplasmic reticulum
(c) Golgi bodies
Answer:
Structure and functions of a chloroplast:
A chloroplast is formed of two membranes and two chambers, so resembles a mitochon-drion. Outer membrane is freely permeable while inner membrane is semi permeable. Inner chamber is filled with a denser and granular proteinaceous (about 50%) ground substance called stroma or matrix. It is site of dark reaction or CO2 fixation of photosynthesis and has a number of grana, 70 S ribosomes and DNA molecules (circular and naked).
1. Grana are site for light reactions of photosynthesis.
2. Function of Chloroplasts: These are sites of photosynthesis, so are called “kitchens of cell.” (c) Golgi complex or Golgi Apparatus:
The golgi complex is usually located near the cell nucleus and in animal cells it is frequently disposed around the centriole pair. It normally consists of numerous sets of membrane-bound, smooth surface cisternae. Each cisterna is flat, disc-shaped and curved like a shallow bowl.

It has lumen which is bounded by a single membrane. Each set of flattened disc-shaped cistemae forms a structure that resembles stack of plates, called a Golgi stack or dictyosome (as referred in the plants). 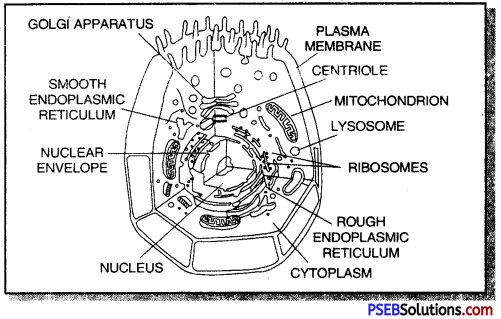 Question 1.
What is cell and cell theory?
Answer:
Cell. 1. Structural and functional unit of life is called cell.
2. A cell is mass of protoplasm formed of different types of inorganic and organic biomolecules and externally bounded by a thin and semipermeable plasma membrane.
Cell Theory. M.J. Schleiden and Theodore Schwann (1938-39) proposed cell theory. The cell theory can be stated as follows:
(a) The body of all living organisms is composed of cells. Cell is a unit of structure and function of life.
(b) New cells are formed from the pre-existing cells only (R. Virchow).
(c) The life is passed from one generation to the next generation through a single cell.

Question 2.
What is a prokaryotic cell?
Answer:
Prokaryotic cell, (pro = primitive, karyon = nucleus) It is characterized by an incipient nucleus called nucleoid formed of single and circular chromosome. It is formed of double-stranded DNA but not associated with histone proteins. It is not enclosed by nuclear membrane.

Question 3.
What is a eukaryotic cell?
Answer:
A eukaryotic (eu = good; karyon = nucleus) cell has true nucleus which has two or more linear chromosomes lying in the nucleoplasm and is surrounded by a double and porous nuclear membrane. Membrane bound organelles present. 80 S Ribosomes present (S = Svedberg unit).

Question 8.
Why are mitochondria called “power house of cell”?
Answer:
Mitochondria are site of generation, transport and storage of ATP. Adenosine triphosphate (ATP) is the energy currency of the cell. Question 20.
How will you examine cells of onion peel.
Answer:
Examination of Onion Feel Question 23.
Which organelle is called as protein factory of the cell?
Answer:
Ribosomes provide space for the synthesis of proteins in the cell. Hence, they are called protein factories. It synthesises various proteins and enzymes for the cell. Haemoglobin is an example of a protein made by free ribosomes in the young red blood corpuscles.

Question 25.
What are plastids? Name its three types.
Answer:
Plastids. These are double membrane bound organelles found in plant cell. These are of three types:

Question 28.
Name the various organelles of cell and mention the most important function of each.
Answer:
Names and functions of cellular organelles:

Question 30.
What will happen to a cell if its nucleus is removed?
Answer:
Cell will die with passage of time as nucleus is the controlling centre of all functions of cell.

Question 1.
What is the structural and functional unit of life?
Answer:
Cell.

Question 5.
What is the main component of nucleus?
Answer:
Chromatin network which takes up the shape of chromosomes at the time of cell division.

Question 7.
Who coined the term ‘Protoplasm’ for the fluid substance of cell?
Answer:
Purkinje (1839).

Question 8.
How it was made possible to observe the complex structures of cell?
Answer:
Discovery of electron microscope.

Question 10.
Which is the longest cell in plants.
Answer:
Sclerenchyma.

Question 13.
List the factors which denote size of cell.
Answer:

Question 14.
What are the two main components of protoplasm?
Answer:
Cytoplasm and nucleoplasm.

Question 16.
What is the primary function of lysosome?
Answer:
A centre of intracellular digestion, so is called digestive bag.

Question 21.
What is cork?
Answer:
Cork is obtained from the bark of a tree.

Question 28.
What is the contribution of Robert Brown in cell biology?
Answer:
Discovered nucleus in the cells of orchid.

Question 29.
What are the two types of cells on the basis of nature of nucleus? *
Answer:
Prokaryotic and Eukaryotic cells.

Question 32.
What is cell theory?
Answer:
All plants and animals are made up of cells and cell is the structural and functional unit of life.

Question 33.
Give the contribution of Rudolf Virchow in the field of biology.
Answer:
He stated “omnis cellula e cellula” which means new cells are formed by the growth and division of pre-existing cells.

Question 35.
Which is the smallest measuring unit in the field of cell biology?
Answer:
Angstrom (A).

Question 36.
In which year electron microscope was invented?
Answer:
1940.

Question 37.
What is the nature of plasma membrane?
Answer:
It is formed of lipids and proteins.

Question 38.
Give the primary function of plasma membrane.
Answer:
It regulates exchange of materials between the cytoplasm and extracellular fluid.

Question 39.
Give one term for a semifluid ground substance present between plasma membrane and nucleus.
Answer:
Cytoplasm.

Question 41.
What is the term for movement of water into and out of cell across a semipermeable membrane?
Answer:
Osmosis.

Question 42.
Define plasmolysis.
Answer:
Loss of water from a plant cell resulting in shrinkage or contraction of cell away from cell wall.

Question 43.
Give the common name of the mitochondria.
Answer:
Powerhouses or ATP mills.

Question 46.
Which type of enzymes are located inside the mitochondria?
Answer:
Respiratory enzymes.

Question 49.
Which cell organelle is called kitchen of cell and why?
Answer:
Chloroplast. It is site of photosynthesis in green plants. During this process plant prepare their own food by trapping solar energy and use COz and water as raw materials.

Question 56.
Write one function of SER.
Answer:
Detoxification of many poisons and drugs.

Question 57.
Give the primary function of Golgi body.
Answer:
Cell secretion and acts as condensation membrane.

Question 58.
Which plastids are involved in storage of food?
Answer:
Leucoplasts.

Question 61.
Why is nucleus called director of cell?
Answer:
It controls and directs all the cellular activities.

Question 63.
What is nature of nuclear membrane?
Answer:
It is two-layered, lipoproteinaceous, porous and semipermeable.

Question 64.
What is primary function of nuclear membrane?
Answer:
Regulates exchange of materials between nucleoplasm and cytoplasm.

Question 65.
What are the functional units of chromosomes?
Answer:
Genes.

Question 66.
What is the chemical nature of a chromosome?
Answer:
DNA and basic protein histones, so is called Deoxyribonucleoprotein (DNP).

Question 67.
Give the primary function of DNA of chromatin fibre.
Answer:
DNA acts as genetic material and helps in transmission of characters from par¬ents to offsprings.

Question 68.
What is the function of vacuole in plant cell?
Answer:
Vacuoles are full of cell sap and provide rigidity and turgidity to cell vacuoles, temporarily stores wastes.

Question 71.
What are two functions of plasma membrane?
Answer:

Question 72.
What is osmosis?
Answer:
It is a special type of diffusion of solvent molecules from low concentration of solution to higher concentration solution separated by semipermeable membrane.