This PSEB 9th Class Computer Notes Chapter 3 Networking will help you in revision during exams.

In networking the computers are connected to each other to share data with each other.

A network is the group of two or more computers that are linked in order to share resources exchange files, or allow communications.
The computers on a network may be linked through cables, telephone lines, radio waves, satellites, or infrared light beams. 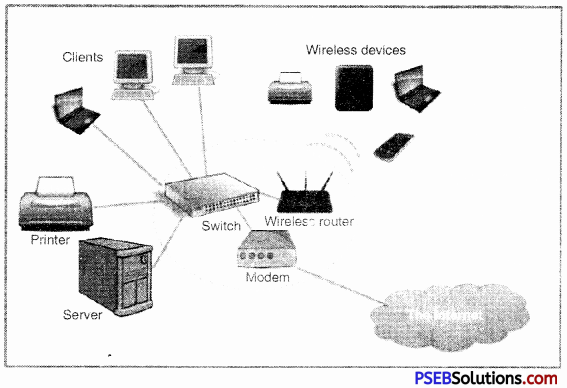 The ability to exchange data and communicate efficiently is the main purpose of networking computers. Some of common factors for Networking are: Advantages and Disadvantages of Computer Network:

The purpose of a network is to join computers together. The computers will also need to include software that enables them to connect to the network.

There are two types of computers which are used for networking:
1. Client or Node: Client/Node is the normal computer system which is connected to network for sharing of resources.
2. Server: It is a powerful computer. It helps in sharing of resources or information. It controls all other nodes.
3. NIC: A network interface card (NIC) is a computer circuit board or card that is installed in a computer so that it can be connected to a network. It should be fitted in each client and server computer. Every client linked to network interface card has its own specific number is called node address.
There are two types of network cards: wired and wireless!
4. HUB/Switch: A networking hub/Switch is a device that allows you to connect multiple computers to a single network device. 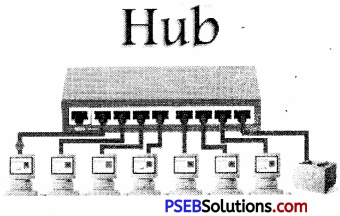 5. Router: A router is hardware device designed to receive, analyze and forward incoming data within a network or to another network. 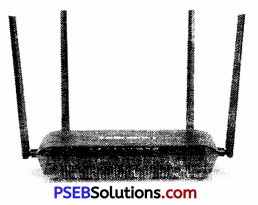 The term Topology refers to the way in which the various nodes or computers of a network are linked together. It describes the actual layout of the computer network hardware.

It may be depicted physically or logically. Physical topology is the placement of the various components of a network, including device location and cable installation, while logical topology illustrates how data flows within a network.

The following factors are considered while selecting a topology:

While making a selection of a particular topology we consider the relative status of different devices that are to be linked.

The nodes in a network can have following two relationships:
1. Peer to Peer: In this relationship, all the devices in the network have equal status in sharing the link.
2. Client-Server (Primary-Secondary): In this, one device controls the traffic and all other devices transmit through primary device.

1. Bus Topology: Bus Topology is the simplest of network topologies. In this type of topology, all the nodes (computers as well as servers) are connected to the single cable (called bus), by the help of T- connectors. This central cable is the backbone of the network and is known as Bus (thus the name). A signal from the source is broadcasted and it travels to all workstations connected to bus cable.

1. Any new computer can be attached easily.
2. It is a cheaper topology.
3. If one computer fails, others are not affected.

4. Cable required is least compared to other network topology.
5. Used in small networks.
6. It is easy to understand & connect

In it all the computers are logically linked in the form of a ring. In it each node is connected to two other nodes. Rings can be unidirectional, with all traffic travelling either clockwise or anticlockwise around the ring.
There are two kinds of ring topologies : 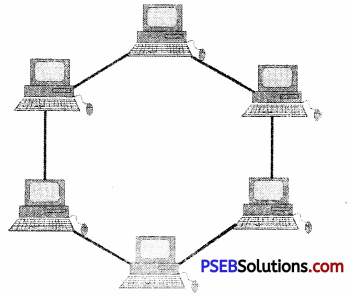 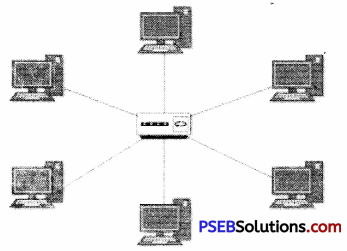 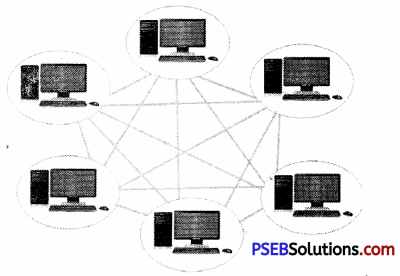 4. In a partially connected mesh topology, at least two of the computers in the network have connections to multiple other computers in that network.

1. Installation and configuration is difficult.
2. Cabling cost is more.

A tree network is a combination of two or more star networks connected together which involve a variety of single nodes connected to a central node.

1. It is an extension of Star and bus Topologies, tree topology is the best alternative.
2. Expansion of Network is possible and easy.
3. The whole network can be easily managed and maintained. 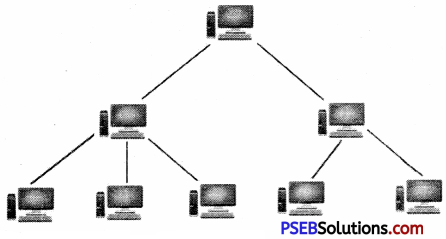 4. Error detection and correction is easy.
5. If one segment is damaged, other segments are not effected.

1. Reliable as Error detecting and troubleshooting is easy. 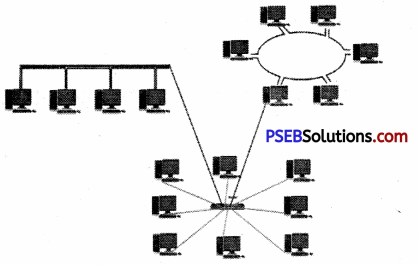 2. Effective.
3. Scalable as size can be increased easily.

2. Accuracy: Data communication should be free from fault.
3. Time limit: Data should reach destination without any delay.

Three methods of data transmission are given below:
1. Simplex: In it communication is one direction. The message source works as the transmitter. It sends the message over the data channel to the receiver. The receiver is the destination of the message.

2. Half duplex: In it information can flow in both directions but not at the same time. In other words if information is sent by one system then second can only receive it or vice versa

3. Full duplex: In it information can move in both directions at same time. It provides fast communication.

Communicating data from one location to another requires some form of pathway or medium. These pathways, called communication channels, use two types of media: cable (twisted-pair wire, cable, and fiber-optic cable) and broadcast (microwave, satellite, radio, and infrared).

Network may be small or large based on it size, complexity and Distribution area. On the basis of its area of distribution, network is divided into three parts :

1. Personal Area Network: A personal area network, or PAN, is a computer network organized around an individual person. This could be inside a small office or residence. Personal area networks can be constructed with cables or be wireless. It refers to the interconnection of information technology devices or gadgets (include laptop computers, PDAs, cellphones, printers) within the environment of an individual user (typically within 10 meters). 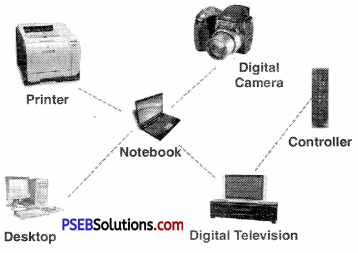 2. Local Area Network (LAN): A LAN is a network that is used for communicating among computer devices, usually within an office building or home. LAN’s enable the sharing of resources. Such as files or hardware devices that may be needed by multiple users. It Is limited in size, typically spanning a few hundred meters, and no more than a mile.

It Requires little wiring, typically a single cable connecting to each device. It has lower cost compared to MAN’s or WAN’s. LAN’s can be either wired or wireless. Twisted pair, coax or fiber optic cable can be used in wired LAN’s. It is suitable to bus, ring or star topology. In it generally coaxial Cable, twisted pair and optical fiber etc. transmission media is used. 3. Metropolitan Area Network (MAN): It is distributed to a city or large area. In it many LANs are connected. A MAN is optimized for a larger geographical area than a LAN, ranging from several blocks of buildings to entire cities. .A MAN might be owned and operated by a single organization, but it usually will be used by many individuals and organization. A MAN often acts as a high speed network to allow sharing of regional resources, A MAN typically covers an area of between 5 and 50 km diameter. 4. Wide Area Network (WAN): WAN covers a large geographic area such as country, continent or even whole of the world. WAN can contain multiple smaller networks, such as LANs or MANs. In this network telephone lines, satellite, microwave etc. media are used. These transmission media are linked with Router. 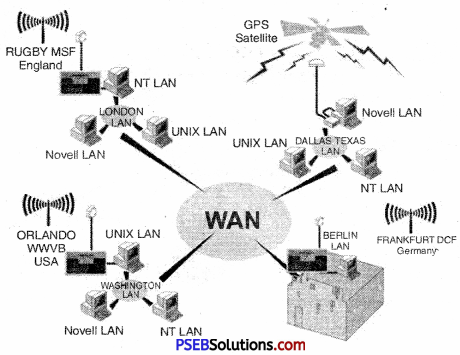