Think and Answer (Textbook Page No. 162)

Question 1.
What is simple pendulum ?
Answer:
Simple pendulum. It consists of heavy mass (metal sphere) tied to a thread and suspended a fixed point of rigid support.

Question 3.
The time taken for one oscillation of the pendulum is called its ……………… .
Answer:
Time Period.

Question 4
………………… is the number of oscillations per unit time.
Answer:
Frequency.

Think and Answer (Textbook Page No. 163)

Question 1.
What do we measure by using a stop clock ?
Answer:
Stop clock is used to measure short-time intervals.

Question 2.
What is the unit of measuring distance ?
Or
Name the S.I. unit of distance.
Answer:
Meter.

(i) The motion of an object in a straight line is called ……………… .
Answer:
Linear motion

(iii) The distance-time graph for uniform speed is a ………………. line.
Answer:
Straight line

(iv) The motion of a simple pendulum is called ………………….. motion.
Answer:
Oscillatory

(i) Speed is the distance travelled by an object per unit time.
Answer:
True

(iii) The time taken to complete one oscillation of a pendulum is its time period.
Answer:
True

(iv) The instrument used to measure the speed of a vehicle is odometer.
Answer:
True

Match the Column I with Column II: Question (i)
Which of the following is a Distance-Time Graph for an object at rest ? 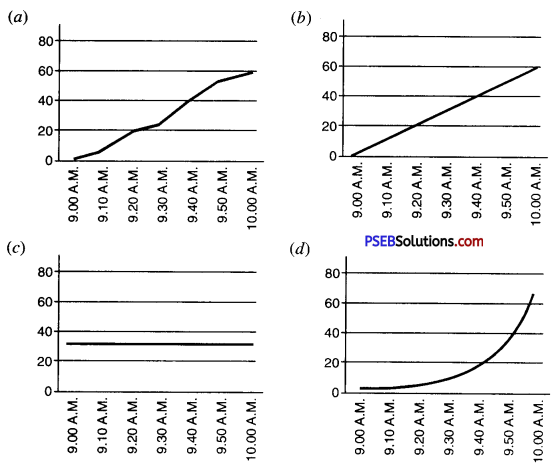 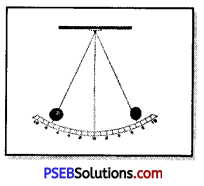 Question (ii)
Which instruments were used for measuring time by the ancient people ?
Answer:
In ancient times, people measured time by natural phenomena. Over time some devices were invented for measuring time. Some of them are given below:
(1) Solar Clock. A change in the position of the sun due to a change in the position of the shadow is used to measure time.
(2) Hour Glass. To measure the time it takes one hour for sand to flow from one bulb to another.
(3) Water Clock. Used to measure the flow of water from one vessel to another at a particular time.
(4) Pendulum. A simple pendulum takes equal time for each oscillation. So Pendulum was used to measure time.

Types of Graph. There are several types of graphs, such as:

Question (i)
Differentiate between slow and fast motion. Give examples.
Answer:
Slow motion. If an object takes too long to cover a short distance, its motion is called slow motion. Example : Motion of tortoise and snail.

Question (iii)
Ajay goes to his school 600 meters away from his house. Find the speed in ms-1, with which he must walk to reach his school in 5 minutes.
Solution:
Distance from Ajay’s school from his house = 600 meters
Time taken to cover the distance from school to house = 5 minutes
We know 1 minute = 60 sec.
So, Time taken = 5 × 60 seconds
= 300 seconds
Total distance covered = 600
Now speed of Ajay =

Question (i)
Describe the method to find the time period of a simple pendulum.
Answer:
Make a simple pendulum by tying a metal sphere with one end of a thread about 1 meter long as shown in the diagram. If there is a fan running around, turn it off. Now let the bob of the pendulum come to rest in the middle position. Mark the middle position with chalk on the floor. Take a stop watch or mobile or wrist watch to measure the time period of the pendulum. Hold the bob and ensure that the thread is stretched and take it one extreme. Now release the sphere slowly. When the sphere is at its starting end, start the stop watch. Count the oscillations.

Repeat this action 3-4 times and note observations in the table above.
You will notice that the time period of pendulum will be almost the same each time. Question (iii)
Figure shown below represents the distance-time graph for the motion of two vehicles A and B. Which one of them is moving faster ? 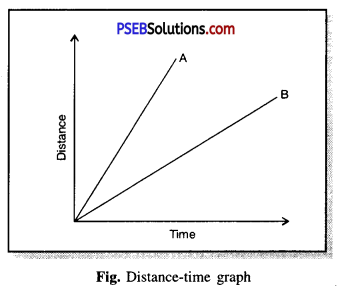 (i) The distance covered by an object in unit time is called …………………
Answer:
Speed

(iii) An instrument used to measure the distance covered by vehicles is called ……………….
Answer:
Odometer

(iv) …………………… is the instrument that measures the speed of moving vehicles.
Answer:
Speedometer

(v) A graph drawn for the distance and time taken for a uniform motion is ………………………
Answer:
Straight line parallel to time axis 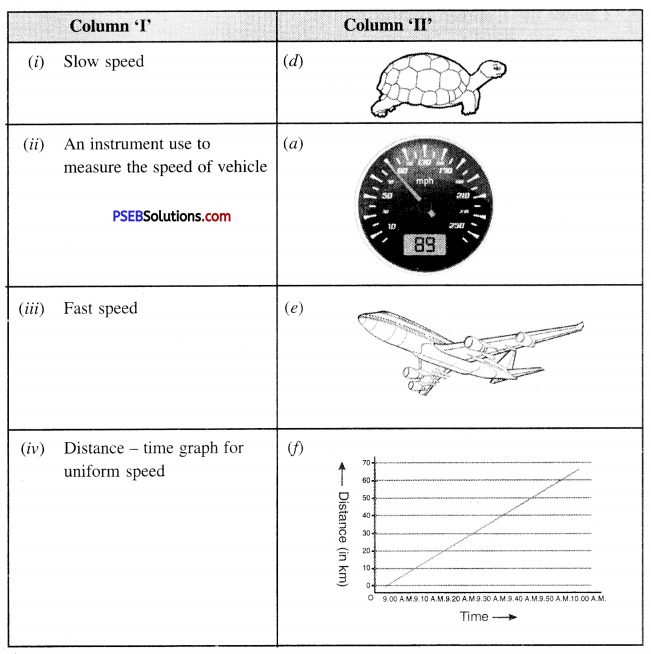 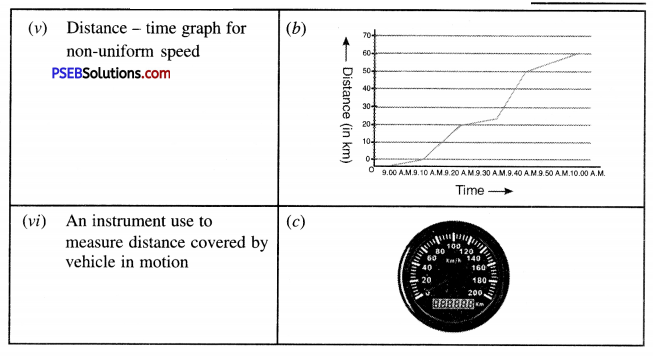 Question (vi)
The device which measures the distance moved by the vehicle is called:
(a) Speedometer
(b) Odometer
(c) Pendulum
(d) None of these.
Answer:
(b) Odometer.

Question (viii)
Which of the following Distance-Time Graph shows the object at rest position ?

(i) The basic unit of time is second.
Answer:
True

(ii) Every object moves with a constant speed.
Answer:
False

(iv) The time period of a given pendulum is not constant.
Answer:
False

(v) The speed of a train is expressed in m/h.
Answer:
False

Question 1.
The rate at which distance is covered corresponds to which quantity-speed or velocity ?
Answer:
Speed.

Question 2.
The rate at which displacement is covered corresponds to which quantity, speed or velocity ?
Answer:
Velocity.

Question 5.
Working of clock depends on which type of motion ?
Answer:
Periodic motion.

Question 7.
What is metallic ball of a pendulum known as ?
Answer:
Bob of the Pendulum.

Question 9.
What is basic unit of time ?
Answer:
Second.

Question 10.
What are larger units of time ?
Answer:
Minute, hour

Question 11.
What is odometer ?
Answer:
Odometer. The device which measures the distance moved by the vehicle, is called odometer.

Question 12.
What is function of speedometer ?
Answer:
It records speed directly in km/h.

Question 2.
What important points are to be kept in mind while choosing the most suitable scale for drawing a graph ?
Answer:
Points to be considered while choosing the scale for drawing a graph :
(0 The difference between the highest and the lowest values of each quantity.
(ii) The intermediate values of each quantity.
(iii) To utilize the maximum part of the graph paper. 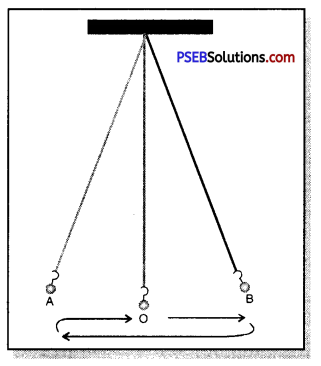