This PSEB 6th Class Computer Notes Chapter 7 Input Devices will help you in revision during exams.

Uses of Input Devices
The main uses of input devices are:

We use input devices to give data and information to the computer. 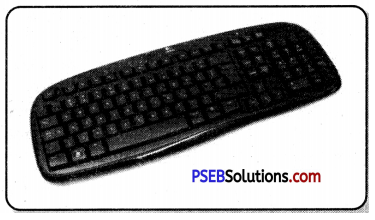 Types of Keys: Keyboard has the following types of keys. These are:

2. Numeric Keys (0 to 9): The numeric keys are used to type numbers. These keys are present below the functional keys. On the right side of the keyboard a special pad is present. It contains 17 keys. This keypad is called numeric key pad.This pad is similar’ to a calculator, because along with numbers it also has mathematical signs and enter keys. On the left top of the pad, a key named num lock is also provided. The keys of this key pad work if num lock is on. The status indicated by the indicator on the keyboard.

3. Functional Keys (FI to F12): These are 12 keys. These are from FI to FI2. These are located at the top of the keyboard. The function of these keys can be different for different programs. For example: F1 key is generally used for help.

4. Special Keys: Each special key is used to perform a special function. Some special keys with their functions are mentioned as under:

6. Special Symbol Keys: These are special symbols used in typing to represent some special meaning. These symbols are used to represent pause in sentence, full stop, arithmetic operations etc.

Mouse Pad: The pad on which we move the mouse is known as the Mouse pad. Mouse has following three buttons:

1. Left Button: Generally left button is used for selecting an item or running a program. When the left button on the mouse is pressed then it is called a “click” operation. When this button is pressed twice, it is called “Double Click”. The programs are opened with double click. While things are selected with a single click.

2. Right Button: When we press the right button, it is called right click. It is used to open a shortcut Menu.

3. Scroll Button: It is just like a wheel fixed in the centre of the left and right button of the mouse. It rotates the screen which is called scrolling. It is used to move the screen up and down.

Microphone
It is also called Mic and is used for sound input. We can give voice instructions to computers with the help of a mic on our computer. Now the computers are capable of getting voice commands also. So the user can speak and the computer will act accordingly to the command given using voice. If a computer has a microphone then you can record your own voice. We can listen to recorded voices with the output device. Those users, who cannot type can give input to the computer with a microphone. Using the microphone we can also talk to our friends on the Internet.

Touch Pad
Touch pads are used in laptops in the form of a small panel containing different touch sensitive areas. It is used in place of a mouse. The buttons of touchpad are similar to mouse i.e left right button which are at the bottom of touch pad. A touch pad is operated by finger and dragging it across a flat surface. As we move our finger on the surface, the cursor on screen will move in the same direction. Bar Code Reader
A Bar code reader (or Bar code scanner) is an electronic device for reading printed bar codes. Like a flatbed scanner, it consists of a light source, a lens and a light sensor translating optical impulses into electrical ones. It is used in shops, stores for different reasons. These are helpful in stores in order to maintain accurate and updated inventory monitoring. They can help to determine the price of an item. It is a fixed input gadget that is used to capture and read information enclosed in a bar code. This device consists of a scanner.

Light Pen
It is a pointing device. It is just like a pen connected to a VDU. The tip of the light pen contains a light sensitive element which when placed against the screen, detects the light from the screen enabling the computer to identify the location of the pen on the screen. Light pens have the advantage of drawing directly on to the screen.

Joy Stick
Joy Stick consists of a base and a stick that can be moved in any direction. The stick can be moved slowly or quickly as required. Some Joy Sticks have sticks that can also be rotated to the left or right. Because of the flexible movements of the Joy Stick, it can provide much greater control than the keys on a keyboard. It is often used to control video games and usually have one or more push buttons. Touch Screen
This is a type of display screen that has a touch-sensitive transparent panel covering the screen. Instead of using a pointing device such as a mouse or light pen, you can use your finger to point directly to objects on the screen. For example: ATM machines, smart phones etc.

Biometric:
Biometric verification is any means by which a person can be uniquely identified by its body parts like fingeiprints, hand, eye, etc. These devices are having very sensitive scanners placed in them. To use it, place the finger on this device, the scanner scans the pattern of fingerprints and sends the signal to the digital circuit for verification purposes. Authentication of the same allows the requested operation. On failure of verification, an error message of the same is displayed. 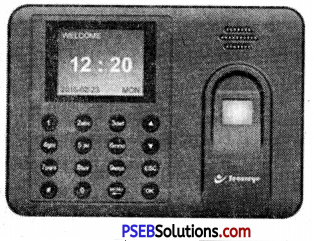 Electronic Signature Pad
It is an electronic device used to capture written signatures and convert them to digital format. This device is having a hand holding pen and a digitally sensitive pad. When the pen is moved on the pad, its movements are being identified and given to the computer in the form of digital signal to make the respective input.