Question 1.
Two identical cells, each of emf E, having negligible internal resistance, are connected in parallel with each other across an external resistance R. What is the current through this resistance?
Answer: Question 2.
Define mobility of a charge carrier. What is its relation with relaxation time?
Answer:
It is defined as how fast electron moves from one place to another.
It is also defined as drift velocity per unit electric field. The SI unit of mobility is m2/V-sec and it is denoted as μ.
μ = \(\frac{\left|v_{d}\right|}{E}=\frac{e E \tau}{m E}=\frac{e \tau}{m}\)
⇒ μ ∝ τ

Question 3.
Define the term ‘relaxation time’ in a conductor.
Answer:
The average time between successive collisions of electrons conductor is known as relaxation time.

Question 4.
Write the expression for the drift velocity of charge carriers in a conductor of length ‘L’ across which a potential difference ‘V’ is applied.
Answer:
vd = \(\frac{e V}{m L}\)τ

Question 5.
For household electrical wiring, one uses Cu wires or Al wires. What considerations are kept in mind? (NCERT Exemplar)
Answer:
Two considerations are required: (i) cost of metal, and (ii) good conductivity of metal. Cost factor inhibits silver. Cu and Al are the next best conductors.

Question 7.
Nichrome and Copper wires of same length and same radius are connected in series. Current I is passed through them. Which wire gets heated up more? Justify your answer.
Answer:
Nichrome, since its resistance is high.

Question 9.
What is the advantage of using thick metallic strips to join wires in a potentiometer? (NCERT Exemplar)
Answer:
The metal strips have low resistance and need not be counted in the potentiometer length l of the null point. One measures only their lengths along the straight segments (of length 1 metre each). This is easily done with the help of centimeter rulings or meter ruler and leads to accurate measurements.

Question 10.
Is the motion of a charge across junction momentum conserving? Why or why not? (NCERT Exemplar)
Answer:
When an electron approaches a junction, in addition to the uniform electric field E facing it normally, it keep the drift velocity fixed as drift velocity depend on E by the relation
Vd = \(\frac{e E \tau}{m}\)
This result into accumulation of charges on the surface of wires at the junction. These produce additional field. These fields change the direction of momentum.
Thus, the motion of a charge across junction is not momentum conserving. 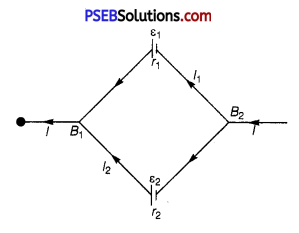 If we want to replace the combination by a single cell, between Bl and B2, of emf Eeq and internal resistance req, we would have
V = Eeq – Ireq Question 1.
(i) Find the magnitude and direction of current in 1Ω resistor in given circuit. 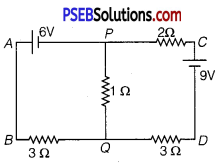 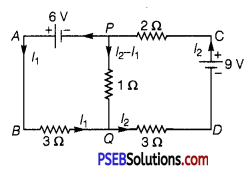 (ii) (a) By increasing resistance R, the current in main circuit decreases, so potential gradient decreases. Hence, a greater length of wire would be needed for balancing the same potential difference. So, the null point would shift towards right (i.e., towards B). (b) By decreasing resistance S, the terminal potential difference V = \(\frac{E}{1+\frac{r}{S}}\) across cell decreases, so balance is obtained at small length i.e., point will be obtained at smaller length. So, the null point would shift towards left (i.e., towards A).