Question 1.
A charge ‘q’ is moved from a point A above a dipole of dipole moment ‘p’ to a point B below the dipole in equatorial plane without acceleration. Find the work done in the process. 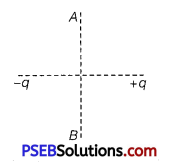 Question 2.
A point charge Q is placed at point O as shown in the figure. Is the potential difference (VA – VB) positive, negative or zero if Q is
(i) positive
(ii) negative

Question 7.
Distinguish between a dielectric and a conductor.
Answer:
Dielectrics are non-conductors and do not have free electrons at all. While conductor has free electrons in its any volume which makes it able to pass the electricity through it.

Question 8.
The given graph shows the variation of charge q versus potential difference V for two capacitors C1 and C2. Both the capacitors have same plate separation but plate area of C2 is greater than that C1. Which line (A or B) corresponds to C1 and why? 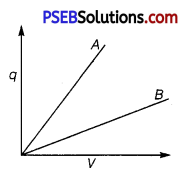 Answer:
Line B corresponds to Q because slope (q/V) of B is less than slope of A.

Question 10.
Can there be a potential difference between two adjacent conductors carrying the same charge? (NCERT Exemplar)
Answer:
Yes, if the sizes are different.

Question 12.
A test charge q is made to move in the electric field of a point charge Q along two different closed paths [figure]. First path has sections along and perpendicular to lines of electric field.
Second path is a rectangular loop of the same area as the first loop. How does the work done compare in the two cases? (NCERT Exemplar) 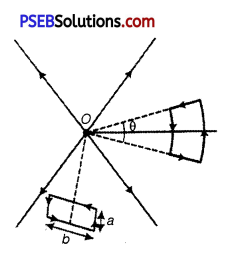 Answer:
As electric field is conservative, work done will be zero in both the cases.

Potential inside the cavity is not zero. Potential is constant.

Question 2.
Two capacitors of unknown capacitances C1 and C2 are connected first in series and then in parallel across a battery of 100 V. If the energy stored in the two combinations is 0.045 J and 0.25 J respectively, determine the value of C1 and C2. Also calculate the charge on each capacitor in parallel combination.
Answer:
Energy stored in a capacitor, 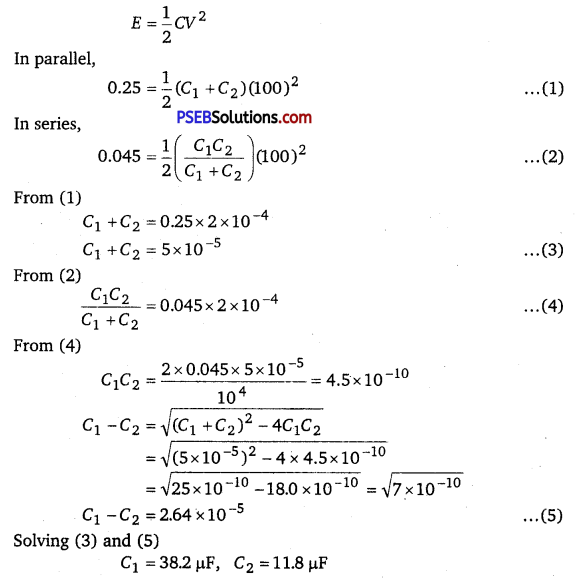 Question 3.
Calculate the equivalent capacitance between points A and B in the circuit below. If a battery of 10 V is connected across A and B, calculate the charge drawn from the battery by the circuit. 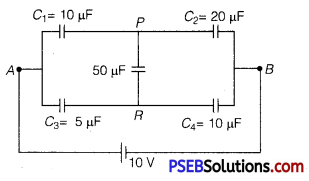 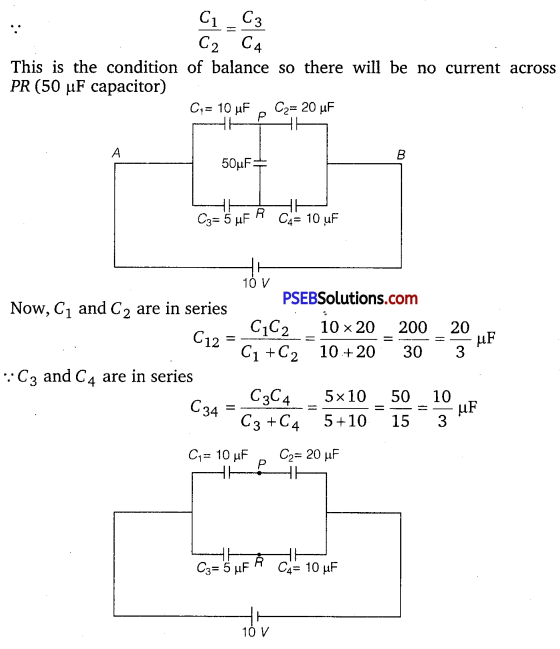 Question 4.
A parallel plate capacitor is charged by a battery to a potential. The battery is disconnected and a dielectric slab is inserted to completely fill the space between the plates.
How will
(a) its capacitance
(b) electric field between the plates and
(c) energy stored in the capacitor be affected? Justify your answer giving necessary mathematical expression for each case.
Answer:
On introduction of dielectric slab in a isolated charged capacitor.
(a) The capacitance (C’) becomes K times of original capacitor as
C = \(\frac{\varepsilon_{0} A}{d}\)
and C ‘ = \(\frac{K \varepsilon_{0} A}{d}\)

Question 5.
Two identical parallel plate capacitors A and B are connected to a battery of V volts with the switch S closed. The switch is now opened and the free space between the plates of the capacitors is filled with a dielectric of dielectric constant K. Find the ratio of the total electrostatic energy stored in both capacitors before and after the introduction of the dielectric.

Now, when switch is opened and then free space of capacitors are filled with dielectric, the capacitance of each capacitor will be KC. For capacitor B, the charge will remain as before and for A, the potential difference will remain same.

Charge on each capacitor in the previous case will be CV.
∴ Energy stored in capacitor A in circuit case is 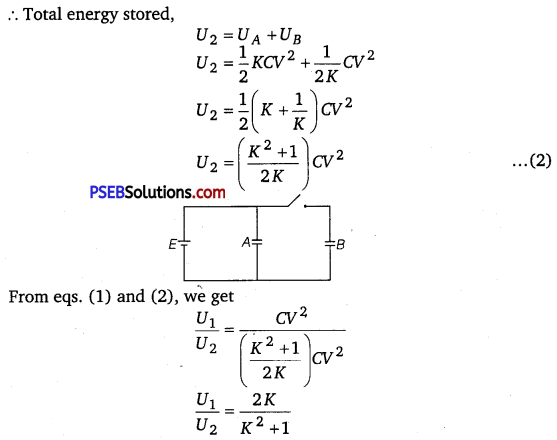 Question 6.
Consider two conducting spheres of radii R1 and R2 with R1 > R2. If the two are at the same potential, the larger sphere has more charge than the smaller sphere. State whether the charge density of the smaller sphere is more or less than that of the larger one. (NCERT Exemplar)
Answer: 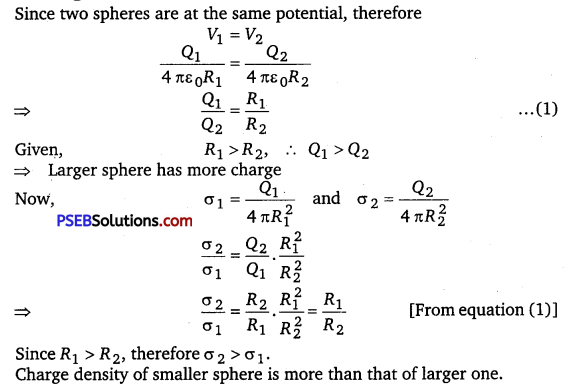 Question 7.
Calculate potential on the axis of a ring due to charge Q uniformly distributed along the ring of radius R.
(NCERT Exemplar)
Answer:
Let us take point P to be at a distance x from the centre of the ring, as shown in figure. The charge element dq is at a distance x from point P. Therefore, V can be written as 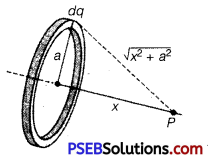 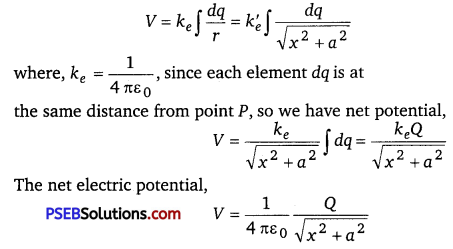 Question 1.
(i) Explain using suitable diagrams, the difference in the behaviour of a
(a) conductor and
(b) dielectric in the presence of external electric field. Define the terms polarisation of a dielectric and write its relation with susceptibility.

(ii) A thin metallic spherical shell of radius R carries a charge Q on its surface. A point charge \(\frac{Q}{2}\) is placed at its centre C and an other charge +2Q is placed outside the shell at a distance x from the centre as shown in the figure. Find (a) the force on the charge at the centre of shell and at the point A, (b) the electric flux through the shell.

Answer:
(i) When a capacitor is placed in an external electric field, the free charges present inside the conductor redistribute themselves in such a manner that the electric field due to induced charges opposes the external field within the conductor. This happens until a static- situation is achieved, i.e., when the two fields cancels each other and the net electrostatic field in the conductor becomes zero.

Both polar and non-polar dielectric develop net dipole moment in the presence of an external field. The dipole moment per unit volume is called polarisation and is denoted by P for linear isotropic dielectrics.
P = %E

(a) At point C, inside the shell.
The electric field inside a spherical shell is zero. Thus, the force experienced by charge at the centre C will also be zero.

Question 2.
(a) Find the ratio of the potential differences that must he applied across the parallel and series combination of two capacitors C 1and C2 with their capacitances in the ratio 1:2 so that the energy stored in the two cases becomes the same.

(b) Show that the potential energy of a dipole making angle θ with the direction of the field is given by u(θ) = – p \(\). Hence find out the amount of work done in rotating it from the position of unstable equilibrium to the stable equilibrium. 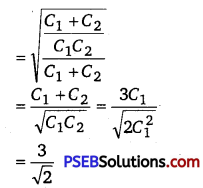 (b) As charges +q and -q traverse equal distance under equal and opposite forces; therefore, net work done in bringing the dipole in the region of electric field perpendicular to field-direction will be zero, i.e.,W1 = 0. 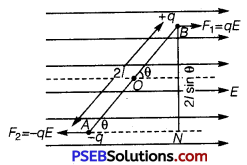