Judo Game Histrory
The game was derived from Jujitsu, the art of either attacking others or defending oneself with one’s own body. The literal meaning of Judo lies in two words ‘Ju’ (gentle) and ‘do’ the way i.e. ‘the gentle way’. In 1882, the founder or father 1 of Judo Dr. Jigaro Kano structured a comprehensive martial art that includes throwing an opponent, 1 immobilize with grappling, locking of an elbow joint or execution of choke. The game was included in the Olympic Games of Tokyo in 1964. The history reveals the presence of game in India in 1929 at Shantiniketan. The Judo federation of j India was formed in 1965. The International Judo L federation was formed in the vear 1951. 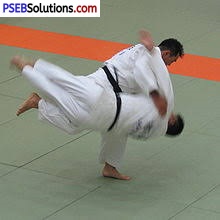 Judo Game Rules And Requlations
1. Weight Classification:
The competition in Judo is conducted on the basis of weight categories for the fair contest. The weight classification for men and women have been listed below: 2. Costume (Judogi):
The contestant shall wear judogi (costume) strongly made in cotton or similar material. It should be without rent or tear. The material should not be so hard or thick as to prevent the opponent from taking a grip. The colour of judogi for the first contestant shall be blue and white or off white for the second contestant. The cotton (obi) belt of 4-5 cm width shall be tied around the waist with a square knot.

3. Flags & Chairs:
Two strong but light weight chairs shall be placed in opposite side of the competition area for the judges. Judges flag (one blue and one white) in a holster attached to chair must be kept for the contest.

Funciamentai Skills
Judo is an intense physical sport combining with offensive techniques of throw, falls, grappling moves such as chocking and locking of joint (elbow joint) and pushing an opponent to the ground. The basic skills for the practice have been explained below : 1. Ukemi Waza (Break fall Technique):
These are the basic movement pattern in response to throwing actions. The basic techniques under break fail are :

2. Kumi-Kata (form of gripping):
This is the most important skill or strategy to learn. It can be learnt with the practice of Kumite-arasoi (grip-fighting). It actually helps to learn to arrive at favourite grip rather than just how to grip the opponent.

These techniques are further divided into groups as given in the table below : Judo Game Important Terminologies
Since, the game originated in Japan, the terminology used in the game is Japanese. The important terms have been explained below :

Question 2.
Who was the father of Judo?
Answer:
Dr. Jigaro Kano.

Question 3.
When did the game included in Olympics?
Answer:
The game was included in Tokyo Olympic Games in 1964.

Question 4.
When did International Judo Federation was formed?
Answer:
In the year 1951.

Question 10.
What is the highest point in Judo?
Answer:
Ippon.

Question 11.
What is the duration of Judo contest for men?
Answer:
4 minutes.

Question 12.
What is the term ‘ReF in Judo means?
Answer:
It is an expression of mutual respect to an opponent before the contest.

Question 13.
What term does the referee use to start the contest?
Answer:
Hajime.