Question 8.
What is the basic structural difference between starch and cellulose?
Answer:
Starch consists of two components-amylose and amylopectin. Amylose is a long linear chain of ≅α-D-(+)-glucose units joined by C1 -C4 glycosidic linkage (α-link). On the other hand, cellulose is a straight-chain polysaccharide of β-D-glucose units joined by C1– C4 glycosidic linkage (β-link). Question 9.
What happens when D-glucose is treated with the following reagents?
(i) HI
(ii) Bromine water
(iii) HNO3
Answer:
(i) HI s On prolonged heating with HI, glucose forms n-hexane.

(iii) HNO3: On oxidation with nitric acid, glucose yields a dicarboxylic acid, that is saccharic acid.

Question 10.
Enumerate the reactions of D-glucose which cannot be explained by its open-chain structure.
Answer: 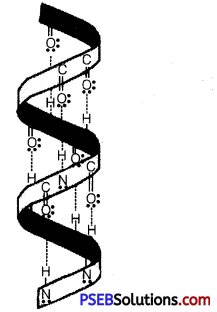 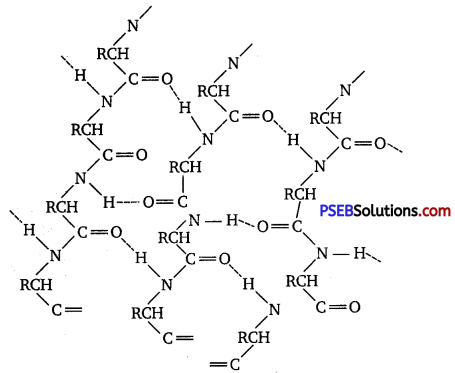 Question 16.
How do you explain the amphoteric behaviour of amino acids?
Answer:
In aqueous solution, the carboxyl group of an amino acid can lose a proton and the amino group can accept a proton to give a dipolar ion known as zwitterion.

Therefore, in zwitterionic form, the amino acid can act both as an acid and as a base.

Again, the enzymes used to catalyse the oxidation of one substrate with the simultaneous reduction of another substrate are named as oxidoreductase enzymes. The name of an enzyme ends with ‘ – ase’.

Question 19.
How are vitamins classified? Name the vitamin responsible for the coagulation of blood.
Answer:
Vitamins are classified into two groups depending upon their solubility in water or fat.

Question 20.
Why are vitamin A and vitamin C essential to us? Give their important sources.
Answer:
Vitamin A: Vitamin A is essential for us because its deficiency can cause xerophthalmia (hardening of cornea of eye) and night blindness. Sources: Carrots, fish liver oil, butter and milk.
Vitamin C: Vitamin C is essential for us because its deficiency causes scurvy (bleeding gums) and pyorrhea (loosening and bleeding of teeth).
Sources: Amla, citrus fruits and green leafy vegetables.

Question 21.
What are nucleic acids? Mention their two important functions.
Answer:
Nucleic acids are biomolecules which are found in the nuclei of all living cells in the form of nucleoproteins or chromosomes (proteins containing nuclei acids as the prosthetic group).

Question 22.
What is the difference between a nucleoside and a nucleotide?
Answer:
A nucleoside is formed when 1-position of pyrimidine (cytosine, thymine or uracil) or 9-position of purine (guanine or adenine) base is connected to C-1 of sugar (ribose or deoxyribose) by a β-linkage. Hence, in general, nucleosides may be represented as: Sugar-Base.

Question 2.
What are the expected products of hydrolysis of lactose?
Answer:
Lactose is composed of β-D galactose and β-D glucose. Thus, on hydrolysis, it gives D-(+)- galactose and D-(+)- glucose.

Question 3.
How do you explain the absence of aldehyde group in the pentaacetate of D-glucose?
Answer:
D-glucose reacts with hydroxylamine (NH2OH) to form an oxime because of the presence of aldehydic (-CHO) group or carbonyl carbon. This happens as the cyclic structure of glucose forms an open-chain structure in an aqueous medium, which then reacts with NH2OH to give an oxime.

Question 4.
The melting points and solubility in water of amino acids are generally higher than that of the corresponding halo acids. Explain.
Answer:
Both acidic (carboxyl) as well as basic (amino) groups are present in the same molecule of amino acids. In aqueous solutions, the carboxyl group can lose a proton and the amino group can accept a proton, thus giving rise to a dipolar ion known as a zwitterion.

Due to this dipolar behaviour, they have strong electrostatic interactions within them and with water. But halo-acids do not exhibit such dipolar behaviour. For this reason, the melting points and the solubility of amino acids in water is higher than those of the corresponding halo-acids.