Question 1.
Define the term ‘amorphous’. Give a few examples of amorphous solids.
Answer:
Amorphous solids are the solids whose constituent particles are of irregular shapes and have short range order. In such an arrangement, a regular and periodically repeating pattern is observed over short distances only. Examples are glass, rubber, and plastic.

Question 2.
What makes a glass different from a solid such as quartz? Under what conditions could quartz be converted into glass?
Answer:
Glass is an amorphous solid in which the constituent particles (SiO4 tetrahedral) have only a short range order, but in quartz, the constituent particles have both long range and short range orders. Quartz can be converted into glass by melting it and cooling it rapidly.

Question 5.
How can you determine the atomic mass of an unknown metal if you know its density and the dimension of its unit cell? Explain.
Answer:
Atomic mass of element, M = \(\frac{d a^{3} N_{A}}{z}\)
where, d = density
NA = Avogadro’s number
z = Number of atoms present in one unit cell.

(ii) The melting points of the given substances are:

The intermolecular forces in molecules of water and ethyl alcohol are mainly hydrogen bonding. The magnitude is more in water than in ethyl alcohol which is evident from the value of their melting points. The intermolecular forces in the molecules of diethyl ether are dipolar forces while in methane only weak vander waals’ force of attraction exist. The value of melting points are the evidences for the same.

Question 7.
How will you distinguish between the following pairs of terms:
(i) Hexagonal close-packing and cubic close-packing?
(ii) Crystal lattice and unit cell?
(iii) Tetrahedral void and octahedral void?
Answer:
(i) Hexagonal close packing (hep): The first layer is formed utilizing maximum space, thus wasting minimum space. In every second row the particles occupy the depressions (also called voids) between the particles of the first row. In the third row, the particles are vertically aligned with those in the first row giving AB AB AB … arrangement. This structure has hexagonal symmetry and is known as hexagonal close packing (hep). This packing is more efficient and leaves small space which is unoccupied by spheres. In hep arrangement, the coordination number is 12 and only 26% space is free. A single unit cell has 4 atoms. Cubic close packing (ccp) Again, if we start with hexagonal layer of spheres and second layer of spheres is arranged by placing the spheres over the voids of the first layer, half of these holes can be filled by these spheres. Presume that spheres in the third layer are arranged to cover octahedral holes. This arrangement leaves third layer not resembling with either first or second layer, but fourth layer is similar to first, fifth
layer to second, sixth to third and so on giving pattern ABCABCABC …. This arrangement has cubic symmetry and is known as cubic closed packed (ccp) arrangement. This is also called face-centred cubic (fee) arrangement. The free space available in this packing is 26% and coordination number is 12.

(ii) The regular three dimensional arrangement of identical points in the space which represent how the constituent particles (atoms, ions, molecules) are arranged in a crystal is called a crystal lattice.
A unit cell is the smallest portion of a crystal lattice, which when repeated over and again in different directions produces the complete crystal lattice.

Question 9.
Explain
(i) The basis of similarities and differences between metallic and ionic crystals.
(ii) Ionic solids are hard and brittle.
Answer:
(i) Similarities
(a) Both ionic and metallic crystals have electrostatic forces of attraction. In ionic crystals, these are between the oppositely charged ions. In metals, these are among the valence electrons and the kernels.
(b) In both cases, the bond is non-directional.

(b) Ionic bond is strong due to electrostatic forces of attraction. Metallic bond may be weak or strong depending upon the number of valence electrons and the size of the kernels.

(ii) Ionic crystals are hard because there are strong electrostatic forces of attraction among the oppositely charged ions. They are brittle because ionic bond is non-directional.

Question 10.
Calculate the efficiency of packing in case of a metal crystal for
(i) simple cubic
(ii) body-centred cubic
(iii) face-centred cubic (with the assumptions that atoms are touching each other).
Solution: 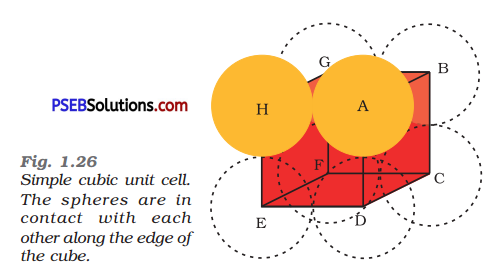 (i) Simple Cubic: In a simple cubic lattice, the particles are located only at the corners of the cube and touch each other along the edge.
Let the edge length of the cube be ‘a’ and the radius of each particle be r.
So, we can write: a = 2r
Now, volume of the cubic unit cell = a3
= (2r)3
= 8r3
We know that the number of particles per unit cell is 1.
Therefore, volume of the occupied unit cell
= \(\frac{4}{3}\) πr3

(ii) Body-centred cubic: It can be observed from the figure given below that the atom at the centre is in contact with the other two atoms diagonally arranged. 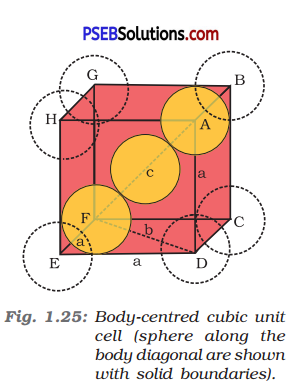 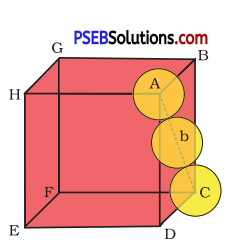 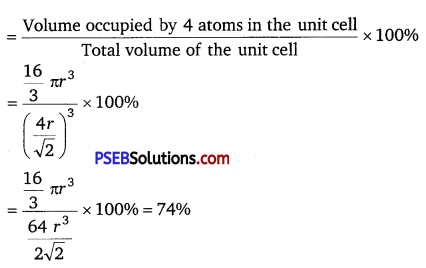 Question 12.
A cubic solid is made of two elements P and Q. Atoms of Q are at the comers of the cube and P at the body-centre. What is the formula of the compound? What are the coordination numbers ofPandQ?
Solution:
It is given that the atoms of Q are present at the corners of the cube.
Therefore, number of atoms of Q in one unit cell = 8 × \(\frac{1}{8}\) = 1
It is also given that the atoms of P are present at the body-centre.
Therefore, number of atoms of P in one unit cell = 1
This means that the ratio of the number of P atoms to the number of Q
atoms, P : Q = 1 : 1
Hence, the formula of the compound is PQ.
The coordination number of both P and Q is 8. 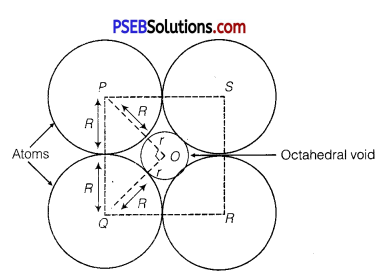 Si and Ge have four valence electrons each. In their crystals, each atom forms four covalent bonds. On the other hand, P and As contain five valence electrons each. When Si or Ge is doped with P or As, the latter occupies some of the lattice sites in the crystal. Four out of five electrons are used in the formation of four covalent bonds with four neighbouring Si or Ge atoms. The remaining fifth electron becomes delocalised and increases the conductivity of the doped Si or Ge.

Question 18.
Non-stoichiometric cuprous oxide, Cu2O can he prepared in laboratory. In this oxide, copper to oxygen ratio is slightly less than 2:1. Can you account for the fact that this substance is a p-type semiconductor?
Answer:
In the cuprous oxide (Cu2O) prepared in the laboratory, copper to oxygen ratio is slightly less than 2:1. This means that the number of Cu+ ions is slightly less than twice the number of O2- ions. This is because some Cu+ ions have been replaced by Cu2+ ions. Every Cu2+ ion replaces two Cu+ ions, thereby creating holes. As a result, the substance conducts electricity with the help of these positive holes. Hence, the substance is a p-type semiconductor.

Question 23.
Explain the following terms with suitable examples:
(i) Schottky defect
(ii) Frenkel defect
(iii) Interstitials and
(iv) F-centres
Answer:
(i) Schottky defect: This defect arises when equal number of cations and anions are missing from the lattice. It is a common defect in ionic compounds of high coordination number where both cations and anions are of the same size, e.g., KCl, NaCl, KBr, etc. Due to this defect, density of crystal decreases and it begins to conduct electricity to a smaller extent. 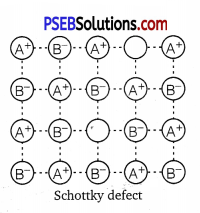 (ii) Frenkel defect: This defect arises when some of the ions of the lattice occupy interstitial sites leaving lattice sites vacant. This defect is generally found in ionic crystals where anion is much larger in size than the cation, e.g., AgBr, ZnS, etc. Due to this defect density does not change, electrical conductivity increases to a small extent and there is no change in over all chemical composition of the crystal. 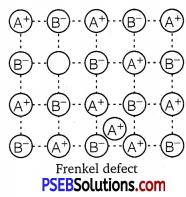 (iv) F-centres: These are the anionic sites occupied by unpaired electrons. F-centres impart colour to crystals. They impart yellow colour to NaCl crystals, violet colour to KCl crystals and pink colour to LiCl crystals.
The colour results by the excitation of electrons when they absorb energy from the visible light falling on the crystal.

(iii) Ferrimagnetism: When the magnetic moments of the domains in the substance are aligned in parallel and antiparallel direction in unequal numbers they are weakly attracted by magnetic field as compared to ferromagnetic substances. Fe3O4 (magnetite) and ferrites like MgFe2O4 and ZnFe2O4 are examples of such substances. These substances also lose ferrimagnetism on heating and become paramagnetic.

Question 1.
Why are solids rigid?
Answer:
The intermolecular forces of attraction that are present in solids are very strong. The constituent particles of solids cannot move from their positions i.e., they have fixed positions. They can only oscillate about their mean positions due to strong attraction forces between the particles. This imparts rigidity.

When an amorphous solid is cut with a sharp edged tool, it cuts into two pieces with irregular surfaces.

Question 11.
Name the parameters that characterise a unit cell.
Answer:
A unit cell is characterised by:
(i) its dimensions along the three edges, a, b, and c. These edges may or may not be mutually perpendicular. 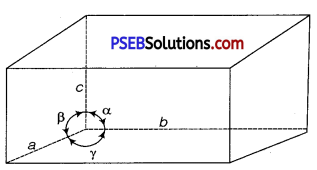 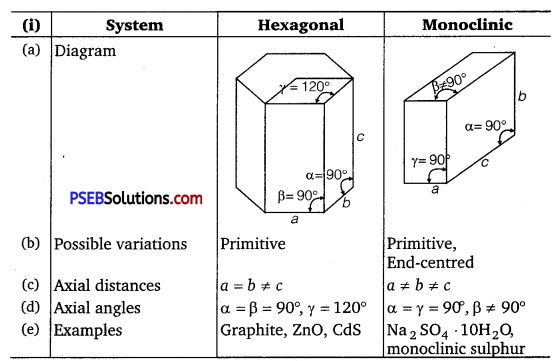 Question 14.
What is the two dimensional coordination number of a molecule in square close packed layer?
Answer:

= 4.004 = 4
Since, there are four atoms of the element present per unit cell. Hence, the cubic unit cell is face-centred cubic {fee) or cubic close-packed (ccp).

Question 21.
Explain how vacancies are introduced in an ionic solid when a cation of higher valence is added as an impurity in it.
Answer: When a cation of higher valence is added to an ionic solid as an impurity to it, the cation of higher valence replaces more than one cation of lower valence so as to keep the crystal electrically neutral. As a result, some sites become vacant. For example, when Sr2+is added to NaCl, each Sr2+ ion replaces two Na+ ions. However, one Sr2+ ion occupies the site of one Na+ ion and the other site remains vacant. Hence, vacancies are introduced. The reason is that the crystal as a whole is to remain electrically neutral.

Question 22.
Ionic solids, which have anionic vacancies due to metal excess defect, develop colour. Explain with the help of a suitable example.
Answer:
The colour develops because of the presence of electrons in the anionic sites. These electrons absorb energy from the visible part of radiation and get excited. For example, when crystals of NaCl are heated in an atmosphere of sodium vapours, the sodium atoms get deposited on the surface of the crystal and the chloride ions from the crystal diffuse to the surface to form NaCl with the deposited Na atoms. During this process, the Na atoms on the surface lose electrons to form Na+ ions and the released electrons diffuse into the crystal to occupy the vacant anionic sites. These electrons get excited by absorbing energy from the visible light and impart yellow colour to the crystals. These electrons are called F-centres (from the German word Farbenzenter meaning colour centre).

The ordering of the domains persists even after the removal of the magnetic field. Thus, the ferromagnetic substance becomes a permanent magnet.