Question 1.
Define mole fraction.
Answer:
Mole fraction of a component in a solution may be defined as the ratio of moles of that compdnent to the total number of moles of all the components present in the solution.

Question 3.
Why is the vapour pressure of a solution of glucose in water lower than that of water? (NCERT Exemplar)
Answer:
This is due to decrease in the escaping tendency of the water molecules from the surface of solution as some of the surface area is occupied by non-volatile solute, glucose particles.

Question 10.
Give an example of a material used for making semipermeable membrane for carrying out reverse osmosis. (NCERT Exemplar)
Answer:
Cellulose acetate.

Question 1.
State Henry’s law. Write its one application. What is the effect of temperature on solubility of gases in liquid?
Answer:
It states that the partial pressure of a gas in vapour phase (p) is proportional to the mole fraction of the gas (χ) in the solution.
p ∝ χ or p = KHχ where KH is the
Henry’s constant.
Application of Henry’s law:
To increase the solubility of CO2 in soft drinks and soda water, the bottle is sealed under high pressure.

Effect of temperature on solubility:
As dissolution is an exothermic process, therefore, according to Le Chatelier’s principle solubility should decrease with rise in temperature.

As elevation in boiling point depends on the number of moles of solute particles and independent of their nature, therefore, it is a colligative property.

Question 4.
Explain the solubility rule ‘like dissolves like’ in terms of intermolecular forces that exist in solutions. (NCERT Exemplar)
Answer:
If the intermolecular interactions are similar in both constituents, i.e., solute and solvent then solute dissolves in the solvent. e.g., polar solutes dissolve in polar solvents and non-polar solutes in non-polar solvents. Thus, the statement ‘like dissolved like’ proves to be true.

Question 1.
(a) What type of deviation is shown by a mixture of ethanol and acetone? Give reason.
(b) A solution of glucose (molar mass = 180 g mol-1) in water is labelled as 10% (by mass). What would be the molality and molarity of the solution?
(Density of solution = 1.2 g mL-1)
Answer
(a) A mixture of ethanol and acetone shows positive deviation from Raoult’s law.
In pure ethanol hydrogen bond exist between the molecules. On adding acetone to ethanol, acetone molecules get in between the molecules of . ethanol thus breaking some of the hydrogen bonds and weakening molecular interactions considerably. Weakening of molecular interactions leads to increase in vapour pressure resulting in positive deviation from Raoult’s law. 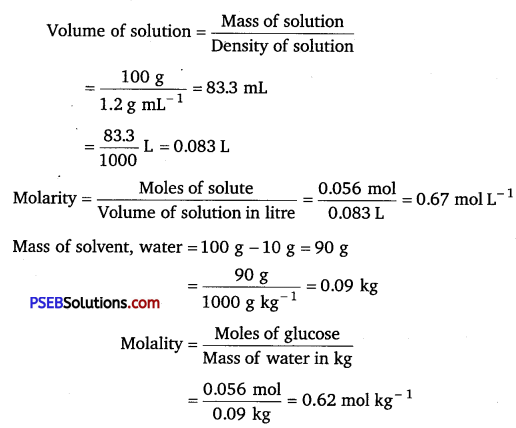