Question 1.
Name the specific components and the linkage between them that form deoxyadenosine.
Answer:
Nitrogenous base (Adenine) and pentose sugar and N-glycosidic linkage.

Question 3.
In an experiment, DNA is treated with a compound which tends to place itself amongst the stacks of nitrogenous base pairs. As a result of this, the distance between two consecutive base increases from 0.34 nm to 0.44 nm. Calculate the length of DNA double helix, which has 2 × 109 bp in saturating the presence of this compound. [NCERT Exemplar]
Answer:
The new length of DNA helix would be
= 2 × 10-9 × 0.44 × 10-9bp.

Question 6.
What is a cistron?
Answer:
Cistron is a segment of DNA coding for a polypeptide chain.

Question 7.
Name the transcriptionally active region of chromatin in a nucleus.
Answer:
Euchromatin or Exon.

Question 9.
Mention the two additional processings which /mRNA needs to
undergo after splicing so as to become functional.
Answer:
Capping and tailing.

Question 10.
Give an example of a codon having dual function.
Answer:
AUG has dual function. It acts as initiation codon and also codes for methionine.

Question 11.
Sometimes cattle or even human beings give birth to their young ones that have extremely different sets of organs like limbs/position of eye(s), etc. Why? [NCERT Exemplar]
Answer:
This is due to a disturbance in coordinated regulation of expression of sets of genes associated with organ development or due to mutations.

Question 13.
What is aminoacylation? State its significance.
Answer:
Aminoacylation of t-RNA involves activation of amino acids by ATP which gets linked to OH’ present at the 3′ end of specific t-RNA. The process is also called charging of t-RNA.

Question 1.
Recall the experiments done by Frederick Griffith, Avery, MacLeod and McCarty, where DNA was speculated to be the genetic material. If RNA, instead of DNA was the genetic material, would the heat killed strain of Pneumococcus have transformed the 12-strain into virulent strain? Explain.
[NCERT Exemplar]
Answer:
RNA is more labile and prone to degradation, owing to the presence of 2’OH group in its ribose. Hence, heat-killed S-strain may not have retained its ability to transform the R-strain into virulent form if RNA was its genetic material.

Question 3.
Following are the features of genetic codes. What does each one indicate?
Stop codon; Unambiguous codon; Degenerate codon; Universal codon.
Answer:

Question 4.
A single base mutation in a gene may not ‘always’ result in loss or gain of function. Do you think the statement is correct? Defend your answer. [NCERT Exemplar]
Answer:
The statement is correct because of degeneracy of codons, mutations at third base of codon, usually does not result into any change in phenotype. This is called silent mutations but at other times it can lead to loss or formation of malformed protein changing the phenotype.

Question 5.
(a) Name the scientist who called tRNA an adapter molecule.
(b) Draw a clover leaf structure of fRNA showing the following:
(i) Tyrosine attached to its amino acid site.
(ii) Anticodon for this amino acid in its correct site (codon for tyrosine is UCA).
(c) What does the actual structure of JRNA look like?
Answer:
(a) Francis Crick
(b) 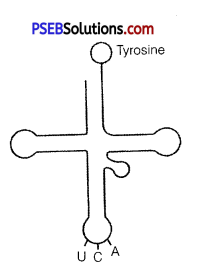 (c) The actual structure of t-RNA looks like inverted L.

Question 6.
A low level of expression of lac operon occurs at all the time. Can you explain the logic behind this phenomena. [NCERT Exemplar]
Answer:
In the complete absence of expression of lac operon, permease will not be synthesised which is essential for transport of lactose from medium into the cells. And if lactose cannot be transported into the cell, then it cannot act as inducer. Hence, cannot relieve the lac operon from its repressed state. Therefore, lac operon is always expressed.

Question 1.
Describe Meselson and Stahl’s experiment that was carried in 1958 on E.coil. Write the conclusion they arrived at after the experiment.
Matthew Meselson and Franklin Stahl (1958) grew E. coli in a medium containing 15NH4Cl (15N is the heavy isotope of nitrogen) as
the only nitrogen source for many generations. The result was that 15N was incorporated into newly synthesised DNA (as well as other nitrogen containing compounds). This heavy DNA molecule could be distinguished from the normal DNA by centrifugation in a cesium chloride (CsCl) density gradient.

They transferred the cells into a medium with normal 14NH4Cl and took samples at various definite time intervals as the cells multiplied, and extracted the DNA that remained as double-stranded helices. The various samples were separated independently as CsCl gradients to measure the densities of DNA. Question 2.
(a) Describe the series of experiments of F. Griffith. Comment on the significance of the results obtained.
(b) State the contribution of MacLeod, McCarty and Avery.
Answer:
(a) Frederick Griffith (1928), a British doctor, was studying the pathogenicity of different strains of Streptococcus pneumoniae. It has two strains- (i) virulent cause pneumonia, has S-type of bacteria, covered by sheath of mucilage, (ii) non-virulent do not produce the disease, has R-type of bacteria, devoid of sheath of mucilage.

Griffith found that on injecting live R-type bacteria did not produce the disease while live S-type caused pneumonia and the death in mice. However, when heat-killed S-type injected, they did not produce the disease. Finally, Griffith injected a combination of live-R-type and heat-killed S-type bacteria into mice. Some mice survived while others developed the disease of pneumonia and died. Autopsy of dead mice showed that they possessed both the type of bacteria (virulent-S-type and non-virulent-R-type) in living form through the mice that had been injected with dead virulent (S-type) and living non-virulent (R-type) bacteria.

From the above experiment, Frederick Griffith concluded that the occurrence of living S-type virulent bacteria is possible only by their formation from R-type non-virulent bacteria which pick-up the trait of virulence from dead bacteria. This phenomenon is called Griffith effect or transformation. Griffith proposed that the transforming principle is a chemical substance released by heat-killed S-type, which changed the S-type into S-bacteria. It was a permanent change as the new S-type formed only S-type progeny. 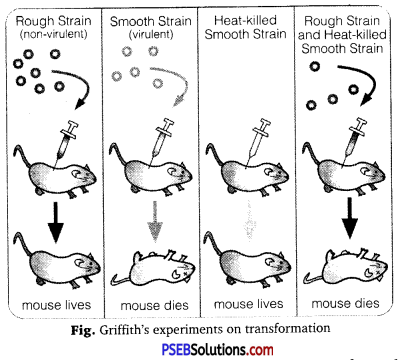 (b) Avery, MacLeod, McCarty discovered that DNA from the heat-killed S-strain caused the living R-strain bacteria to become transformed into living S-type. They found proteases and RNAases did not affect transformation while DNAases inhibit transformation. They concluded that DNA is the hereditary material.