Question 6.
In a flywheel, most of the mass is concentrated at the rim. Explain why?
Answer:
Concentration of mass at the rim increases the moment of inertia and thereby brings uniform motion.

Question 7.
Does the radius of gyration depend upon the speed of rotation of the body?
Answer:
No, it depends only on the distribution of mass of the body.

Question 8.
Can the mass of body be taken to be concentrated at its centre of mass for the purpose of calculating its rotational inertia?
Answer:
No, the moment of inertia greatly depends on the distribution of mass about the axis of rotation.

So, a body in translatory motion can have angular momentum.
It will be zero, if origin lies on the line of motion of particle.

Question 2.
Figure shows momentum versus time graph for a particle moving along x – axis. In which region, force on the particle is large. Why? Question 3.
Two cylindrical hollow drums of radii R and 2J2, and of a common height h, are rotating with angular velocities ω (anti-clockwise) and ω (clockwise), respectively.
Their axes, fixed are parallel and in a horizontal plane separated by (3R + δ). They are now brought in contact (δ → 0).
(i) Show the frictional forces just after contact.
(ii) Identify forces and torques external to the system just after contact.
(iii) What would be the ratio of final angular velocities when friction ceases? (NCERT Exemplar)
Solution: L = Iω is constant, if moment of inertia (I) of the system changes. It means as I changes, then ω also changes.
Hence K.E. of rotation also changes with the change in I. In other words, rotational K.E. is not conserved.

Question 5.
How much fraction of the kinetic energy of rolling is purely
(i) translational, (ii) rotational.
Solution: 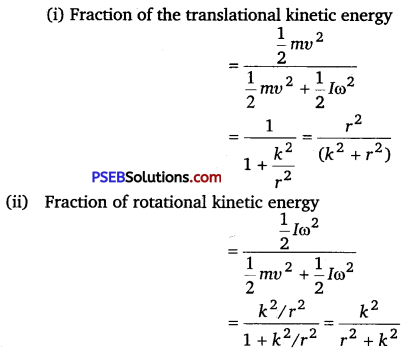 Question 6.
Listening to the discussion on causes of pollution and due to which temperature on earth is rising, increase in temperature leads to melting of polar ice, Meenu realised that if each one of us contributed to create pollution free environment, then even small efforts can lead to big results. So, she decided to lead the step and instead of going to school by her car, she joined school bus and also asked her father to go to office using car pool.
(i) What do you think is mainly responsible for global warming?
(ii) If the ice on polar caps of the earth melts due to pollution, how will it affect the duration of the day?
Explain.
(iii) What values does Meenu show?
Answer:
(i) Pollution created by the people of world is the main cause of global warming.
(ii) Earth rotates about its polar axis. When ice of polar caps of earth melts, mass concentrated near the axis of rotation spreads out, therefore moment of inertia, I increases.
As no external torque acts,
∴ L = I = Iω = (\(\frac{2 \pi}{T}\)) = Constant
With increase of I, T will increase i.e., length of day will also increase,
(iii) Meenu is considerate towards environment and her thought of leading the steps to reduce pollution is commendable.

Question 7.
Explain how a cat is able to land on its feet after a fall taking the advantage of principle of conservation of angular momentum?
Answer:
When a cat falls to ground from a height, it stretches its body alongwith the tail so that its moment of inertia becomes high. Since, la is to remain constant, the value of angular speed a decreases and therefore the cat is able to’ land on the ground gently.

Question 8.
A uniform disc of radius R is resting on a table on its rim. The coefficient of friction between disc and table is μ (figure). Now, the disc is pulled with a force \(\overrightarrow{\boldsymbol{F}}\) as shown in the figure. What is the maximum value of \(\overrightarrow{\boldsymbol{F}}\) for which the disc rolls without slipping? (NCERT Exemplar)

(ii) If two equal and opposite forces act in such a way that their lines of action coincide, then these forces cancel out the effect of each other. Hence, the body will not rotate.

Question 1.
Find position of centre of mass of a semicircular disc of radius r. (NCERT Exemplar)
Solution:
As semicircular disc is symmetrical about its one of diameter, we take axes as shown. So, now we only have to calculate YCM (As XCM is zero by symmetry and choice of origin). 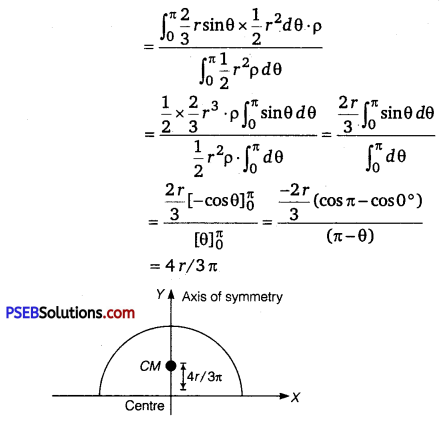 Question 2.
Obtain an expression for linear acceleration of a cylinder rolling down an inclined plane and hence find the condition for the cylinder to roll down the inclined plane without slipping.
Solution:
When a cylinder rolls down on an inclind plane, then forces involved are (i) Weight mg (ii) Normal reaction N (iii) Friction f
From free body diagam,